The Delectable Foods Of Vietnam 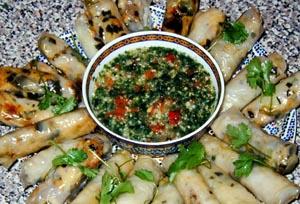 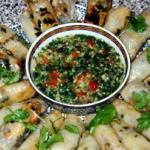 Vietnamese food is fast emerging in North America as one of the most favored of all the Asian cuisines. While this tasty food has long been appreciated in France, Vietnam's former colonial master, people in the Western Hemisphere are only beginning to discover its many healthy and succulent attributes. Its reliance, mainly on rice, wheat, raw or semi-raw vegetables and all types of fresh herbs with a scant use of meats and oil, makes it an ideal cuisine for the health-conscious. Some food writers claim that the Vietnamese possess a culinary kitchen that is among the healthiest to be found anywhere on the globe.

In the same fashion as many other facets of life in Vietnam, a nation of 70 million, the food of the country is saturated with Chinese influences. Once under the colonial rule of China, the Vietnamese took on, besides Buddhism and Confucianism, chopsticks and the wok. Their kitchen is literally a spillover of the Chinese cuisine with a touch of the culinary arts, adopted from the other neighbouring countries.

However, in the last century it has been heavenly influenced by the French. Even though rice remains the main staple, the baguettes introduced by the French is much favoured with a meal. These influences, and the bountiful ingredients found in the countryside, makes food a daily glorification of life.

From the centuries of foreign domination, and because of its great northern and southern fertile and rich rice baskets - the Red River and Mekong Deltas - Vietnamese food developed its own character. Soy sauce in only rarely used throughout the country. Instead, Nuoc Mam fish sauce, the most important ingredient in all of Vietnamese cuisine and the base of all piquant dips replaces many condiments and seasonings in cooking.

It is almost always served with Vietnamese meals, just as we serve salt and pepper. Nuoc Mam, when freshly prepared, is very tasty and gradually becomes addictive. It is added to almost everything and employed as a replacement for the world-wide well-known sauces.

As to the cooking process, unlike the Chinese, stir-frying plays only a small role in the kitchen of Vietnam. Simmering the food is the usual method of cooking.

Vietnam's culinary delights vary greatly from the north to the south. However, all have as their main base either rice or, more commonly, noodles. The Vietnamese are noodle-fanatics. At home, in restaurants or standing at food stands, they consume noodles in great quantities for the three meals of the day. Made from mung beans, rice or wheat, noodles are eaten in soups and entrees, and fried crisp with the meal or for snacks.

Also, throughout the country, with noodles, fresh vegetables and herbs are always served. No meal is complete without a plate of fresh sliced cucumbers and hot peppers, bean sprouts; and sprigs of basil, coriander, mint or other related herbs.

On the other hand, there are important differences in the regional cuisines. The northern Vietnamese have a fondness for beef and use much more black pepper than chilies, but the dishes are not as rich or spicy as the foods of the country's south. In central Vietnam, the food is the hottest in the country. Hot peppers overflow in the market places and cooks use them with great ingenuity to enhance their dishes. Further south, in the surrounding area around Saigon, the housewife's trademark are fresh vegetables. Here, the cuisine has, more than any other part of Vietnam, taken much from French kitchen like baguettes whose smell entice the passersby in the early morning hours.

Nevertheless, there are a number of common dishes to be found throughout the country. Cha ca (fish balls), Cha Gio or Nem Ran (spring rolls of meat and vegetables), Gio Lua (type of sausages) and Pho Bo, (beef-noodle soup) are served from Hanoi in the north to Saigon in the south. Pho Bo, world-wide, is the best known of all Vietnamese soup dishes. Eaten as a snack or with the meal, often even for breakfast, it consists of a broth of rice noodles and beef or chicken, fresh herbs and onion, but often with the addition of lime juice, chilli peppers and vinegar accompanied with Quay (fried dough).

Overshadowing these popular foods are the seafood dishes. Crabs, lobsters, mussels, shrimp, squids, and countless types of fish are found on the daily menus of all the Vietnamese households or restaurants. Also, without exception, soups are popular, and are almost always consumed with every meal. From Mien Ga (a chicken and fish sauce noodle soup, spiced with herbs) and Hu Tieu (a chicken, meat and shrimp soup served with a broth over rice noodles) to Canh Chua (a seafood sweet and sour soup served with fruit and green herbs) and Mang Tay Nau Cua (an asparagus and crab meat soup), they are all mouth-watering.

The dishes for the meal are usually served with long-grain rice, Nuoc Mam, and a wide range of fresh herbs and vegetables, at the same time. Generally, chopsticks are used. However, if European food is served, it is eaten with a knife and fork, especially when there are foreign guests.

The following are my own versions of Vietnamese typical dishes. I have substituted some ingredients, not easily found in North America, for others. However, they are still, in the main, the same as those traditionally prepared.