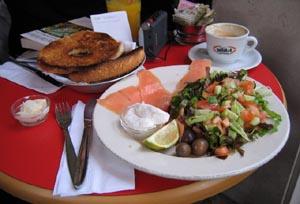 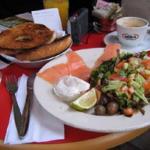 In 1994, to celebrate my 40th birthday, I circumambulated the globe without the benefit of airplanes. During that 9-month, 29,157-mile odyssey, I became the first travel writer to document a round-the-world journey with "live" Internet dispatches -- all of which were published in real-time (more or less) by a once-great website called GNN. Those dispatches were ultimately expanded, edited, and condensed into a book called The Size of the World.

In March of this year, I'll turn 50. Yikes! I have to say, it kind of snuck up on me. I was caught up short, without a plan. Part of the reason was 10 years of diligent avoidance: short of circling the Earth on the Space Shuttle, I couldn't imagine any journey that would equal, as a spiritual and intellectual challenge, the one I made ten years ago.

And then, in early February -- during dinner with a friend -- a brainstorm took hold. Although I was raised in a Jewish family, and make my way as a travel writer, I have never visited Israel. It just never happened, for one reason or another, despite myriad invitations and opportunities.

All that is about to change. With the support of ThingsAsian and Ethical Traveler, I'll soon be on a jet bound for Tel Aviv, Jerusalem, and the general neighborhood of Abraham, Jesus Christ, and Mohammad. And -- as I did 10 years ago -- I'll be sending back real-time dispatches, which will appear on this page.

The situation in Israel has never been great, and these days it's about as bad as it gets. Between Hamas suicide bombers and the infamous Barrier, tensions are running high. I've been reading up on the history of the area, but I have no idea what to expect. One thing I can tell you: I've got some interesting contacts over there, and we'll meet some pretty amazing people.

I'm tremendously grateful for this inspiration, and for this opportunity. Please travel with me as I navigate one of the world's most ancient and fascinating flashpoints, and try to figure out why this tiny part of the world covers so much territory in our hearts and minds.

The (com)Promised Land:
Dispatches from Israel & Beyond.