Echoes of the Air War Fading Over Hanoi 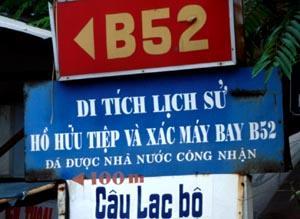 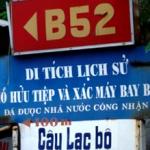 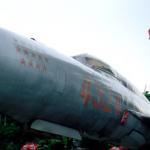 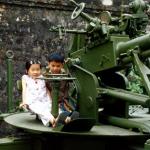 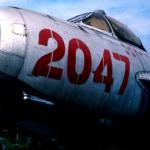 Thirty years after the last B-52 dropped its bombs on Hanoi, I found few reminders of the American aerial assault on Vietnam's capital city. The bomb craters had been filled in, the destroyed buildings replaced, the air-raid shelters dismantled. From its bustling old quarter to its ultramodern high-rise districts, Hanoi prospered like never before. Yet I knew that just three decades ago the city had endured one of its darkest hours when the United States Air Force placed the city under aerial siege. From 1965 to 1973, American bombs fell across the length of the city with great loss of life. I wanted to learn more about this period of Hanoi's history, and so I started my quest at B-52 Lake.

There I discovered that Hanoi's most haunting war memorial had fallen from the sky. Literally. This ready-made monument consisted of little more than the wreckage of an American B-52, which had come tumbling to earth when Hanoi's anti-aircraft defenses had blasted the giant bomber from the sky like a shotgun hitting skeet. The wreckage had landed in a small pond, which the government renamed "May Bay B-52," or B-52 Lake.

I had to hire a xe om-a motorbike taxi-to get to B-52 Lake, which lies in an obscure residential neighborhood near Bach Thao Park. The motorbike driver had only a rough sense of how to get there, but a bright-red sign reading "May Bay B-52" pointed the way. The sign led us down a narrow alleyway, and at the end of this twisting, bumpy passage I found the lake itself, which turned out to be not much larger than an Olympic-sized pool.

In the center of this little pond an island of scrap metal jutted from the water. A length of fuselage bore the white emblem of the United States Air Force, and a set of huge landing-gear wheels suggested the massive size of the eight-engine B-52. Painted a military green, the bits of wreckage had been crumpled by the blast of an anti-aircraft missile and the resultant plunge into the lake. The brackish pond looked toxic, as if fluids leaking from the downed plane had poisoned the water.

I paced the entire perimeter of the rectangular lake, which had been neatly surrounded with a concrete walkway and railing. I wondered if the crew of the stricken B-52 had bailed out and been captured; I wondered too if this plane and crew had bombed Bach Mai Hospital in December 1972, killing dozens of patients and staff. Any sign or plaque that might have provided such information, however, had long since been removed. The lake, in fact, seemed largely forgotten; shutters barred the windows of its little one-room museum, which looked abandoned. I remained the only visitor in any case. B-52 Lake simply offered no explanation, but then again perhaps no explanation was needed. That pile of scrap metal poignantly symbolized America's defeat like no other museum or memorial in Hanoi.

Later that week I had a look at the Long Bien Bridge, which spans the broad Red River that runs through downtown Hanoi. As my minibus drove along the adjacent Chuong Duong Bridge, I could see where the destroyed portions had been replaced with a mismatched assortment of spans. Though my guide declined to mention it, perhaps from lack of interest or perhaps from a desire to avoid delicate topics like the war, I knew that the Long Bien Bridge had been one of the most bombed targets in North Vietnam. After repeated raids the USAF had finally managed to put the bridge out of action, though this hollow victory cost the lives of many pilots and failed to prevent the Vietnamese from crossing the river by other means. After the war construction crews replaced the destroyed sections of the bridge with a mish-mash of different style spans. Today the Long Bien Bridge still carries a steady flow of pedestrians, cyclos, and motorbikes.

I never saw any other sign of war damage in Hanoi, which cheered me a great deal. I'd been told I would see bomb craters pitting the rice paddies around Hanoi's international airport when my flight swooped in to land, but had never succeeded in spotting them. I suspected that they had long since been filled in. Or perhaps the craters surrounded Gia Lam, the city's old airfield no longer used by commercial planes. Regardless, the city had clearly moved on from the war years-though older residents no doubt still grieved for family and friends lost in the raids-so to trace the history of the air war I had to visit the city's museums, two of which dealt directly with the aerial assault on the city.

I made a sodden expedition to the Army Museum on the appropriately named Dien Bien Phu Street. Despite the nonstop rain, rattle-trap buses flying the Vietnamese flag disgorged tour groups from the provinces while camera-laden foreign tourists emerged from taxis to fumble with their umbrellas. I shared the museum with French travelers, Hanoi school children, and Vietnamese army cadets. Together we milled about the MiG-21 fighter plane mounted on a plinth in the front garden of the museum. Fourteen red stars painted on the nose of the plane symbolized the number of American aircraft it had supposedly shot down. Knowing that the museum provided a venue for the government's self-serving view of the war, I remained suspicious of this claim. It struck me as patriotic hyperbole. Still, there was no question that the Vietnamese military had shot down thousands of American planes during the war.

The museum's courtyard offered hard proof in the form of American aircraft wreckage piled up in a small mountain of twisted propellers, shattered turboprop engines, and ragged chunks of wing and fuselage. The pride of American military might had been reduced to a junkyard scrap heap. One camouflaged section of wing carried the insignia of the USAF Tactical Air Command. Ejection seats remained the most common piece of debris, as this is what parachuting pilots took with them when they bailed out of burning F-4 Phantoms, F-111 Aardvarks, and B-52 Stratofortresses.

Display cases inside the museum building housed the flight gear of these captured American flyers. A heap of flight helmets resembled a pile of skulls; a gray flight suit belonging to one Lieutenant McKamey of squadron VA-23 rested like an uneasy ghost. There were military ID cards and mess-hall passes; there were shoulder patches, survival equipment, and oxygen masks. I wondered if any of this gear belonged to the crew of the unknown bomber that had crashed into B-52 Lake.

The Vietnamese military held captured pilots in the Maison Centrale, a prison originally built by the colonial French. After ejecting from his damaged A-4 Skyhawk, Major John McCain, now a US senator, spent several years in the prison with hundreds of other American POWs. They dubbed the prison the Hanoi Hilton, and in one of the war's greatest ironies, most of the jail has since been demolished and replaced by a luxury hotel and office complex. A wing of the prison has been preserved as a museum, however, and attracts a steady stream of foreign tourists.

Ghoulish wax mannequin displays in dark corners of the jail cells graphically depict the torture of dissidents and guerrilla leaders in the days when the French colonial police ran the prison. American pilots received no better treatment from their Vietnamese captors, but the museum displays suggest instead that the pilots spent their time relaxing in a combination spa and summer camp. I found the museum thoroughly disagreeable, alternatively macabre in the style of a carnival haunted house and dogmatic in the manner of the most blatantly false government propaganda. A whiff of capitalism had even crept into the prison in the form of tasteless "Maison Centrale" T-shirts for sale in the museum shop.

Several days later I took a cab out to the Air Force Museum, which may have the honor of being the city's most forgotten museum. My arrival woke a young recruit from his nap in the gate-side sentry box. He groggily brushed off his uniform and donned his cap before cheerily waving me onto the grounds. I paid a 10,000-dong entry fee to a trio of severe-looking women, and then I had the entire complex completely to myself.

The cavernous museum recounted the aerial defense of Hanoi in great detail, though the English-language signs had been written in almost unintelligible prose. Still, I got the gist. In an American version of the human-wave attacks employed by the Viet Cong, the US aircraft had come at Hanoi in swarms that suffered huge losses at the hands of Vietnamese fighter pilots and anti-aircraft gunners. The displays cheered the home team with unabashed bias, but they nonetheless gave a fairly accurate description of the air war that had raged over Hanoi. The displays made no attempt to whitewash the horrific casualties sustained by Vietnamese fighter pilots; many displays referred to pilots who had "died gloriously." One placard read, "He flew into enemy formation and sacrificed." Another memorable sign described how a victorious pilot had "wifed out [sic] three American planes."

Outside I examined a flight line of discarded warplanes from both the North and South Vietnamese air forces. I counted an American-built F-5 and A-37 captured from the South Vietnamese air force in the closing days of the war. I strolled past the Russian-built aircraft supplied to the North Vietnamese air force, including MiG-17 and MiG-21 fighter planes, AN-2 transports, and MI-24 helicopter gunships used during the Vietnamese invasion of Khmer Rouge-ruled Cambodia. This lost squadron languished in an overgrown field, landing-gear tires soft and windshields opaque with dust. The museum lacked a runway, and these aging planes would never fly again. More than any other sight in Hanoi, this told me that the air war was over.

Standing in the departure lounge of Hanoi's Noi Bai International Airport the next day, I realized that the city still remained under aerial assault. Fortunately, this benign invasion involved Boeing 737s and Airbus A-320s rather than B-52s and F-4 Phantoms. Instead of the winged insignia of the USAF or the red star of the Vietnamese air force, I saw the livery of airlines ranging from Thai Air to Cathay Pacific. In the distance I could see the hangers of the military airfield across the runway, but they looked dilapidated and largely abandoned. In the foreground, I saw the shiny Airbuses of Vietnam Airlines. An international crowd thronged the terminal, which echoed with the blast of airliners landing and taking off. I also imagined that I heard the faint echo of jet-fighter afterburners and exploding bombs, but that distant echo of the air war was fading like the rumble of a distant storm.

Directions to Museums and Monuments Mentioned in the Article

To reach B-52 Lake, head out of the city on Phan Dinh Phung until you see a bright red sign on the left that reads "May Bay B-52". Turn down the narrow side street marked by the sign until you reach the lake. No admission fee or set hours.

Long Bien Bridge is open to pedestrians and two-wheeled traffic only, and in the right weather can be an interesting walk across the Red River.

The Air Force Museum can be found on Truong Chinh Street. This address takes you far from the city center. To ensure an easy return journey, you might want to have your taxi or xe om driver wait for you while you tour the museum. The entrance fee is 10,000 dong. Open 8 to 11 a.m. and 1 to 5 p.m.

Warning: Entrance fees and museum hours can and do change.