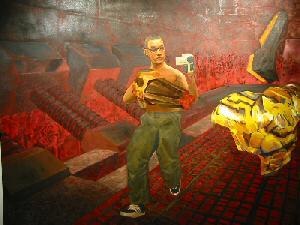 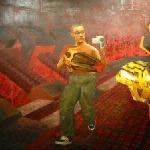 Feng Mengbo, Beijing computer-games-artist extraordinaire, is missing. He has yet to show up for our meeting at the Hanart TZ gallery and even the staff there have no idea where he's gone, after the opening of his show was cancelled the previous day when a typhoon eight signal was hoisted.

'Mengbo is a little depressed because his opening was cancelled by the typhoon,' says gallery assistant Marcello Kwan. Within 90 minutes, Feng is due to give a multimedia presentation at the Asia Art Archive (AAA) on Hollywood Road.

Feng, who has lectured at the likes of New York's Museum of Modern Art, is a sought-after speaker. The mainland artist, who presents his images in the stylised format of computer games, has shown in more than 20 countries, most notably at the prestigious Centre Pompidou in Paris. Has he decided to call the Hong Kong trip a washout?

When Feng eventually calls the gallery 30 minutes later, Kwan is clearly relieved. 'He was stuck at a ToysRUs, up in the New Territories,' he says. 'He's on his way now.'

'Unlike many Chinese artists, Feng doesn't much care for talking about the social context of his art,' Chang says. 'He doesn't mix much with the Beijing art scene. Until recently, he'd never exhibited in China. The first time he did was in 2002 at the 10-year retrospective of Chinese experimental art.

'But he's certainly a Chinese artist. His vision couldn't possibly come from elsewhere. It's clearly a vision from Beijing, from China, from a country that's very self-conscious of its weight, of its size, and of its position in the world. You can see the interaction in his work between the cultural and political world, something common in Beijing, but not nearly as present in Hong Kong.'

Having worked in paint, video and digital media, Feng's most recent pieces feature blood-soaked screen shots that looks as if they're part of the violent computer games that so upset many parents. From a technical viewpoint, Feng's paintings might be called photo-realism, with a nerdy twist. They're exact renderings of screen shots in which the artist has placed himself in the protagonist's role.

At 1.30pm, Feng finally appears and apologises for being late. He'd been shopping for his four-year-old son, Renao. 'If he has a lot of games to play with, I can do my work in peace,' he says.

We talk on the way to his AAA appointment. Late as he is, we make a stop at a computer shop so he can replace a burnt-out cable. Like the characters in his video games, Feng is constantly upgrading his weapons. Since he jumped from the world of traditional paint to multimedia art in 1994, his weapon of choice has been the Macintosh. 'Less viruses, better graphics,' he says.

On the way to the store, Feng speaks enthusiastically about where he sees computer games going. 'Oh, we're absolutely not at the pinnacle yet,' he says. 'The next wave will offer totally new input devices. Soon we won't be playing by mouse or keyboard. Methods are already being developed to track players' movements by thought, like, um ...'

'Like what Keanu Reeves used in Johnny Mnemonic?' I suggest, wondering if he'll get the reference to the data chip Reeves' character has implanted in his head. 'Yeah, like that,' he says.

We get to AAA just in time, but Feng's audience is forced to wait another 15 minutes while he sorts out technical problems with his laptop. Eventually, the presentation begins. The first images might well be called Portraits of the Artist as a Young Boy. They're scanned crayon drawings from 1970, and depict stern-faced soldiers ready to do battle. This is the Cultural Revolution as seen through the eyes of a child.

Fast-forwarding a quarter of a century, the artist points out the similarities in theme between his childhood doodling and one of his earliest computer-generated pieces: a series of video-game screen shots based on the Long March, called Game Over. This piece, the first to be shown at Hanart, in 1994, follows the adventures of a Red Guard who flings cans of Coca-Cola at his enemies. In Taxi Taxi, another piece with a background straight out of an old-school video game, we see Mao Zedong being ignored as he stands by the side of the road, hand stretched in the familiar gesture that once called all of China to attention. 'Now, the same gesture can't even hail a cab,' Chang says, offering an interpretation of the work's meaning.

In between showing his pieces, Feng waxes technical about his equipment, showing detailed pictures of his evolving computer set-up - perhaps too detailed. Around the room, there are stifled yawns, fidgeting and drooping heads.

But the crowd perks up as Feng gets into the meat of his presentation: his latest works, which are based on the computer game Quake. These include paintings, short films and other random media, all featuring the artist as a character.

But is it art? As if on cue, Feng flashes newspaper and magazine clippings on the screen, including a piece from The New York Times asking the same question. Does he think his art is a bit geeky? He laughs. 'Maybe it is ... but I don't care.'

Certainly, Feng's art is unique and could have come only from a Beijing artist whose experiences range from the Cultural Revolution to the digital age. Feng is at his best when he's being himself, as he does in his Quake-based short film Filth. In it, his avatar, a camcorder-wielding soldier with a cigarette hanging from his lip, engages in philosophical dialogue with an enemy resembling a humanoid cockroach as a battle rages around them. Eventually, the conversation dries up. There's a burst of gunfire and the bug-man lies dead. The film closes with the words 'When God is dead, you'll know it.' Art? Definitely. Geeky? Maybe. But when it gets rolling, it's certainly fascinating stuff.

For more information on Feng Mengbo, go to www.mengbo.com