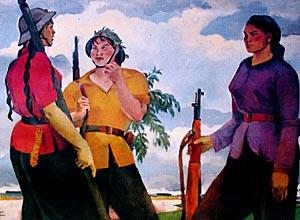 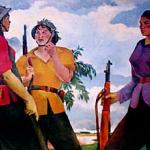 In 1994, the People's Army of Vietnam (VPA) marked the 50th anniversary of its creation on December 12, 1944. To commemorate this milestone, the People's Army Publishing House and the Fine Arts Publishing House jointly reissued Fifty Years of Painting and Sculpture on Armed Forces and Revolutionary Wars. This glossy coffee-table book measures an impressive 10 by 14 inches and contains hundreds of color reproductions of paintings and sculptures created by Vietnamese artists. All the art in the book relates to the VPA in some way, but beyond that, the artwork exhibits a wide diversity of subject and theme. The artists employ a fascinating melange of European and Asian art styles to create watercolor and oil paintings, woodcut and lacquer portraits, and bas relief and three-dimensional sculpture.

The artists featured in the book were directly involved in the events they portray in their artwork; many served in Viet Minh, Viet Cong, or North Vietnamese Army (NVA) combat units. Through their art, much can be learned about the recent history of Vietnam, which so tragically involved virtually continuous military conflict. In fact, this book is as much a military history book as an art book and it is as informative as a collection of wartime news photographs. The art does not concern itself with combat statistics and battleplans; nor does it seek journalistic objectivity. Instead it focuses on the individual people involved in the battles and from these portraits we can learn a great deal.

Much of the art featured has obvious propaganda value. For example, the point of many paintings in the book is to portray the Communist forces as friends of the people. Consider the oil painting titled "Mutual Affection Between Soldiers and the People," by Le Hoang Anh. This painting is one of several that depicts peasants offering food to soldiers, while other paintings in the book show troops helping to harvest rice or repairing civilian homes.

In fact, many paintings blur the distinction between soldier and civilian, suggesting that the army is the people. A woodcut titled "Three Generations" by Hoang Tram shows a father, son and granddaughter serving together in the Viet Cong, while another woodcut by Huy Oanh shows a grandfather and granddaughter holding rifles in the service of their common cause. This art was clearly designed to foster the idea that the Communist Vietnamese were fighting a war of national liberation, and that such a war, by definition, involves men and women of all ages and backgrounds.

Given this view that the entire population must be mobilized for the war effort, it is not surprising that many works of art in Fifty Years of Painting and Sculpture focus on female soldiers and guerrillas. Women are seen as integral to the revolutionary struggle, both as combatants and as mothers raising the future defenders of the nation. "On Duty Hours," an oil painting by Nguyen Tien Chung, shows a young woman suckling her baby with a rifle slung over her shoulder. A bas-relief sculpture by Nguyen Thi Kim portrays an all-female unit defending the city of Hue. Throughout the book women are depicted as mothers, fighters, mourners, heroes and lovers, but above all else, as equals.

Not all the art in this collection has an explicit propaganda objective, however. For example, because the Communist forces were not a highly mechanized army, many artists consistently return to the agony and exhaustion of forced marches. There's no propaganda in these paintings; the artists are speaking from painful experience. These artists served in the armed forces and clearly remember all the time they spent trudging up mountains and through swamps, backs bowed beneath the weight of their weaponry. "Troops Marching in the Rain" by Le Tri Dung shows soldiers leaning into a black gale; other paintings show troops struggling over mountain passes or wading across rivers and streams. There is not one but three paintings titled "Staging a March," and they all portray foot-sore soldiers. The carrying of supplies down the Ho Chi Minh Trail figures in many paintings as well. Though one memorable painting shows an ammunition-hauling elephant, there are few trucks in these paintings-just heavily laden men and women.

Inevitably, much of the art in in this book deals with combat. Interestingly, art portraying battles in progress are relatively rare; most of the art focuses on pre- or post-battle portraits of Vietnamese soldiers and civilians. Those artists who do choose to paint actual combat scenes, however, do so with skill and imagination. Styles vary from folk art to socialist realism; many artists depict battle in stylized portraits of terror and confusion. Nguyen Hiem's "Tam Vu Battle" offers a blurry vision of green and black figures running through a landscape of the same colors that is reminiscent of the chaotic combat footage shot by cameramen covering the war in Vietnam. Night battles are painted with blood red skies; day battles are a smoky mix of faded browns, tans and greens.

An artistic tour-de-force, this book is meant to serve as a memorial to the sacrifices of the forces. Many of the artists fought against the French colonial troops, the various regimes in the South and American forces. Some, such as To Ngoc Van, Hoang Anh, Truong Ngoc, died during their service, as did many of the people-corporals and cooks, mothers and medics-portrayed by these artists. The art contained in this book is a paradoxical tribute to their victory and a resounding reminder that no war, in the end, is worth its cost.