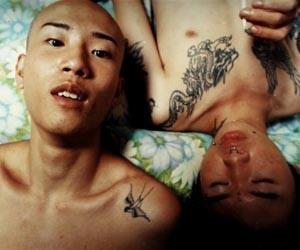 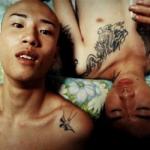 When it comes to teenage angst and ennui, there are degrees of social rebellion, and it all depends upon the society and its standards. According to Singapore's strict political and social standards, school-age children are expected to meet high levels of academic achievement and go on to become productive, law-abiding adults. Here, Melvin Chen, Vynn Soh, Shaun Tan, three real-life young men who do not fit within the social mold, are in the throes of finding themselves through gangs, drugs, tattoos, body piercing and music videos.

The boys, all aged 15 (and thus the film's title), spend their days ditching classes, roaming the streets of Singapore while everyone else is hard at work, searching for something to fill the void. Another tattoo, another piece of facial hardware, a new music video, a gang fight, and even the perfect building from which to plummet to one's death.

Oddly however, to the casual observer, life really doesn't seem all that bad. They all have a roof over their heads, clothes on their backs, money in their pockets, and plenty of electronic equipment with which to record their own music videos. It seems that the main complaint is alienation from their families. So to Melvin, Vynn, and Shaun, ‘The Brotherhood' is all that matters, and the only significant character in the film that even remotely resembles a human female is a blow-up doll that they irreverently flaunt in the city streets, and later mockingly violate in their den of pornography.

‘15' began as a 2002 documentary short in which Singaporean director Royston Tan focused his lens on three troubled teenage boys, and with the encouragement and support of his colleagues, Tan expanded ‘15' into a feature length film. Due to its controversial drug, gang, profanity, and homoerotic content, and the extensive use of the Hokkien language over the preferred Mandarin and English, ‘15' was originally banned in Singapore. However, it was later given an R rating by the Singapore Board of Film Censors. They recommended 27 cuts, and Tan's resulting film was a satirical version titled ‘Cut', which further angered the censors. Nonetheless, ‘15' went on to win awards in Singapore and at international film festivals, and screened in theaters in New York. And although the boys do not identify themselves as homosexual, due to several homoerotic scenes, ‘15' has also been embraced by the gay community.

In a theme and context reminiscent of A Clockwork Orange, ‘15' paints a portrait of troubled teenage life in abstract vignettes, stylized musical interludes, and enigmatic segment titles. And while its sometimes shockingly candid scenes and dialogue may offend some audiences, to others, it may pale in comparison to the brutality of inner-city gang life in other countries. In either case, ‘15' is an excellent way to see how the other half lives.