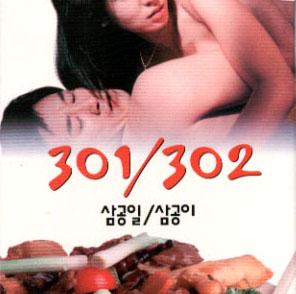 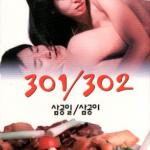 Dark matters are treated with a light touch in this food-as-metaphor film by Korean director Cheol-su Park. The title "301/302" refers to the apartment numbers of two young Korean women who live next door to each other. The 1995 film stars Eun-jin Bang as a lusty and sensual cook who lives in apartment 301, and Sin-Hye Hwang as an anorexic and sexually repressed freelance writer who lives in apartment 302.

The story commences with a nosy police detective interrogating 301 in her sparkling, state-of-the-art kitchen, on the disappearance of her anorexic neighbor in 302. As the details of the mystery unfold, the setting moves back and forth in time between the lives of the two women, and the series of events that led them to the same apartment building.

Meanwhile, in the household where 302 grew up, her avaricious mother spends all day counting money and making trips to the bank, looking the other way while her good-for-nothing husband, the owner of a neighborhood butcher shop, sexually molests her teenaged daughter. And to make matters worse, 302 is later implicated by her step-father in the lurid cover-up of a butcher shop mishap that leaves her psychologically scarred for life.

When the two women finally cross paths, they have both started life anew in an upscale high-rise apartment building. As a neighborly gesture, 301 prepares a gourmet meal, which she delivers on a serving tray to the writer in 302, with the declaration that she hopes they can become friends. Before long, 301 is back to her old habit of throwing herself into her cooking, this time on a mission to fatten up her emaciated neighbor. Over time, however, much to her horror, she discovers that all the delicious food she prepared has been tossed untouched into the garbage.

With an air of curiosity, as well as one of genuine concern, she confronts 302 on her eating disorder, in hopes of helping her overcome it. And in the tell-all confessional that follows, we finally learn the truth about both women, and witness their unique solution to the problem.

301/302 is not only a deliciously compelling mystery, in the process of telling a story, it also obliquely examines the elemental nature of food, its symbolism, and the profound effect it has upon the female psyche. Without a hint of self-indulgence or contrivance, the film raises and answers the hard questions about the complex issue of woman vs. food in the personification of these two strange yet believable female characters. 301/302 may delight, and it may horrify, but the film is most assuredly... food for thought.