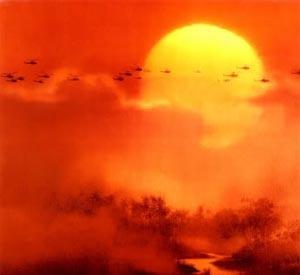 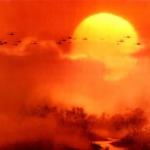 Francis Ford Coppola's herculean Vietnam War epic stars Martin Sheen as Captain Benjamin L. Willard, a Special Forces officer sent up the Nang River on a mission to find and assassinate Colonel Walter E. Kurtz, a fellow officer who has gone AWOL to set up a despotic compound in the jungles of Cambodia. Crafted in the format of a classic quest, Captain Willard's journey upriver features a series of stops along the way that illuminate both the tragedy and futility of war.

Captain Willard's odyssey begins with a dossier and dispatch from his commanding officers in Saigon, who instruct him to seek out Colonel Kurtz and terminate him by any means "with extreme prejudice". To aid him in his mission, he is joined by boat pilot George "Chief" Phillips, Jay "Chef" Hicks, Tyrone "Clean" Miller, and surfer Lance B. Johnson. They are aided in transit to their embarkation point at mouth of the river by Lieutenant Colonel Bill Kilgore, a surfing fanatic who only agrees to transport Willard and his crew because he learns that surfing legend Lance B. Johnson is on board. While in Kilgore's charge, the crew witnesses his horrific incendiary destruction of a Viet Cong village.

Along the way upriver aboard the Riverine, a Navy Patrol Boat, Willard and his crew are stalked by a tiger while searching for mangoes; they attend a USO performance by Playboy Bunnies that goes terribly wrong, they slaughter a Vietnamese family on a houseboat; they witness a North Vietnamese attack on the Do Long Bridge; they encounter a band of chaotic, unsupervised troops; and suffer an attack by enemy snipers armed with both guns and spears. And when what's left of the crew finally reach the encampment of Colonel Kurtz, they are greeted by a crazed photojournalist singing the praises of the deranged despot. Still fully prepared to carry out his mission, it doesn't take Willard long to realize that he is trapped like a fly in a spider's web by a deeply disturbed man.

Loosely based on Joseph Conrad's Heart of Darkness, with allusions to war correspondent Michael Herr's Dispatches, Apocalypse Now has been hailed by critics as one of the best films in cinematic history. Its star-studded supporting cast includes performances by Harrison Ford, Robert Duval, a very young Laurence Fishburn, Scott Glenn, and Dennis Hopper. Overlaid with narration by Martin Sheen, and music by The Doors, Apocalypse Now was filmed mainly in the Philippines, and the more than one million feet of film footage inspired an award-winning documentary titled Hearts of Darkness: A Filmmaker's Apocalypse. In 2001, Francis Ford Coppola released Apocalypse Now Redux, which contains an additional fifty minutes of scenes not included in the original version, for a total running time of 202 minutes. Apocalypse Now received nominations and awards at film festivals around the world, and from its eight Oscar nominations, it received Academy Awards for cinematography and sound.

As a film that debuted while the Vietnam War was still ongoing, Apocalypse Now is a work of both cinematic and historical importance. Not only does it tell the story as an archetypal construct, it pioneered a whole new genre of unflinching realism in war-themed filmmaking. And although the two concepts may be mutually exclusive, juxtaposed within the context of the film, they make perfect sense as a storytelling medium. And although it is hard to say whether Francis Ford Coppola's award-winning masterpiece has been enhanced by the additional footage, either version is worth a look, especially since our twenty-first century conflict is such a markedly different war. So, take three hours and watch Apocalypse Now Redux, not only for its historical and cinematic value, but for its comparative value as well.