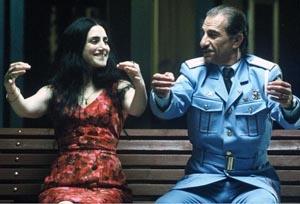 Ronit Elkabetz and Sasson Gabai star in The Band's Visit 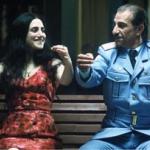 The Band's Visit is a small, simple story that takes place in the remote town of Beit Hatikva, Israel, where the Alexandria Ceremonial Police Orchestra has been stranded for the night. Beit Hatikva is actually a fictional town with a name very similar to Petah Tikvah, an actual town, seven miles east of Tel Aviv, where the band had been scheduled to play at the opening ceremony of the Arab Culture Center.

When there is no one to welcome their arrival at the Tel Aviv airport, the band is left to find their own bus transportation to Petah Tikva, but due to the bad pronunciation of their desired destination, the driver delivered them to Beit Hatikva instead. And when Tawfig Zakaria, the band conductor, inquires at a local diner for directions to the Arab Culture Center, Dina, the proprietor, tells him, "There is no Arab Center. No culture. Not Israeli culture, not Arab, no culture at all." And with the last bus back to Tel Aviv having already departed, the band must resign themselves to spending the night in this culturally-bereft town.

To their good fortune, Dina is sympathetic to their plight and offers the spare room at her apartment to Tawfig and Haled, and arranges for the others to stay the night at the homes of a couple of local families. As the evening progresses, the band members get acquainted with their hosts, who seem less than pleased at the intrusion, until they find a common bond in music. Meanwhile, Dina and Tawfig go out for a night on the town, and for a fleeting moment, it even looks as though romance is in the air. By dawn's early light, the lives of all concerned have been changed in some small yet significant way.

Known in Israel as Bikur Ha-Tizmoret, The Band's Visit was written and directed by Eran Kolirin, whose previous experience is mainly in television. But it seems that Kolirin knocked one out of the park on his first foray in to feature-length cinema in 2007. But for the fact that more than half of the film's dialogue is in English, The Band's Visit would have been a contender for an Academy Award, and it went on to win awards at major film festivals all over the globe, including Israel, Cannes, Chicago, Copenhagen, Manila, Montreal, Munich, Tokyo, and Zurich.

The Band's Visit is deserving of its many accolades. Performances by the film's stars, Sasson Gabai and Ronit Elkabetz, are heartfelt and sincere, two souls from different cultures whose lives intersect for a single night. And the contributions of the supporting cast bring an element of understated humor to an otherwise lean plot. Throughout the film, the band members offer glimpses of their musical talent, but when at last they raise their instruments to play at the ceremonial opening of the Arab Culture Center, the moment is cinematic magic.

The Band's Visit is available on Amazon.

I Never Got Used To The Guns