Film Review: In Between Days 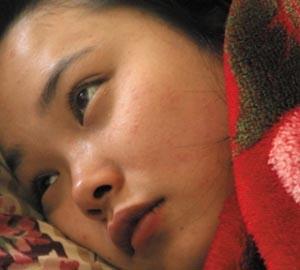 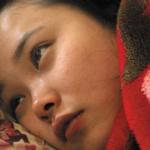 It's a cold, lonely life for Aimee, a Korean teenager who has recently immigrated with her mother to the outskirts of Toronto. Her days are spent in high school, in ESL classes, where she mindlessly doodles in her notebook, waiting for the bell to ring. Nearly every waking moment outside of school is spent in the company of her best friend Tran, a Korean classmate. Aimee's mother works two jobs to support their modest household, so Aimee is left to her own devices for much of the time, cooking meals for herself and Tran, doing chores around the house, and hanging out with friends.

To the casual observer, not much appears to be going on in Aimee's life. Yet, just beneath the surface, she is a cauldron of emotions. She feels isolated in her failure to assimilate herself into a close circle of friends. She misses her father as she writes wistful letters to him, assuring him that she and her mother are doing fine in Toronto, and looking forward to the day when he will finally come for a visit. Meanwhile, her mother, who has begun dating another man, is already hinting at marriage. And, as if that weren't enough, Aimee is beginning to have romantic feelings for Tran. Yet she somehow manages to keep it all contained behind her shy exterior.

Tran is something of a puzzle box himself: a young man of few words, and many mixed messages. He seems at ease in Aimee's company, although he doesn't let on that his home life is troubled, and whatever feelings he has for her are expressed not through overt communication, but through misguided sexual innuendos, and passive-aggressive remarks about her budding relationship with Steve, another Korean boy. Yet when Aimee makes a play for Tran, he retreats, leaving her feeling hurt and confused.

Written and directed by So Yong Kim, in collaboration with writer, director, producer Bradley Rust Gray, the film stars Jiseon Kim as Aimee and Taegu Andy Kang as her best friend Tran, both of whom were absolute beginners in the realm of cinema. Kim was discovered while working in a bakery in New Jersey, and Kang in a Toronto nightclub. The film was shot in a mere 24 days over the Christmas break, with much of the interaction and dialogue between the two characters being improvisational, loosely following a basic script. Nonetheless, In Between Days went on to win the coveted Special Jury Prize at the 2006 Sundance Film Festival.

In Between Days is a small, unpretentious film. Much of its substance dwells within the subtext, in the silence, in the spaces between words and actions, and most importantly, in the truth it reveals about young love. In this inchoate phase, young men and women have no precedent for navigating their way through such new and complex feelings. Frustration foils hopes of fulfillment, and true communication is thwarted by awkward, inarticulate attempts at self-expression. For all their naïve passion, when it comes to romance, most teenagers are completely clueless.