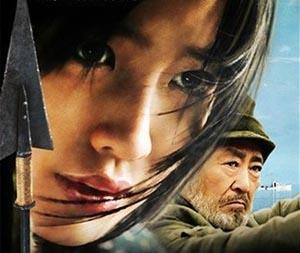 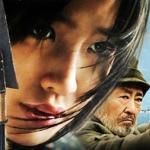 With no dialogue between two nameless characters, The Bow tells a visually seductive story of a sixteen-year-old girl who has spent the past ten years of her young life on a fishing boat with an old man who runs a charter service from the mainland. Using a motorized skiff, he shuttles back and forth to shore each day, picking up supplies and ferrying fishermen who come to cast their lines from his boat.

Life seems happy and functional as the old man eagerly awaits the girl's seventeenth birthday, when she will reach the age of consent to marry him. He returns from each trip with parts and pieces of their wedding attire: a pair of red silk shoes, matching embroidered robes, a jeweled headdress. These he hides one by one in a locked cupboard, and then marks off another day on the calendar.

Within the eccentricity of this floating world is a bow that the old man uses interchangeably as a weapon, a musical instrument, and a divining device. He is known in the village for an esoteric fortune-telling ritual in which he stands in the skiff with his bow and arrows as the girl swings on a rope swing dangling from the side of the fishing boat, which is decorated with a painted image of Buddha. As she swings back and forth, the old man takes aim and shoots three arrows past her into the hull of the boat. The girl retrieves the arrows and then whispers a message into the old man's ear, which he, in turn, whispers into the ear of the fisherman having his fortune told.

When he's not using the bow to tell fortunes, the old man also fits it with a small, skin-covered drum that resonates violin-like music when the bowstring is played with an arrow strung with horsehair. And when the fishermen get a little too friendly with the girl, the old man fends them off with warning shots from the bow. But when a handsome young student comes aboard with his father for an overnight fishing trip, the girl takes a shine to him, and the old man sees his plans for marrying her begin to slip away.

Known in Korean as Hwal, The Bow was written and directed by Ki-duk Kim and stars Yeo-reum Han as the young girl, Seong-hwang Jeon as the old man, and Si-jeok Seo as the young student. All the cast members are relative newcomers to Korean cinema, however Kim did work with his leading lady on an earlier film titled Samaria (Samaritan Girl). Other excellent works by Ki-duk Kim include Three-Iron, and Spring, Summer, Fall, Winter, and Spring.

Ki-duk Kim's films are known for their minimal dialogue, their natural settings, their melodic musical themes, and their potent metaphors, and The Bow is no exception. Throughout the film, the old man and the girl never speak an audible word. The water that supports and surrounds them is at times peaceful and inviting, at others, turbulent and forbidding. The music that emanates from the old man's makeshift violin sets the tone for this enigmatic work. And the bow as weapon, musical instrument, and divining device offers many metaphoric possibilities, especially when the word "hwal" is translated into the English word "bow", with its two pronunciations and its multiple meanings. The cumulative effect of these four elements is both thought-provoking and transcendent.