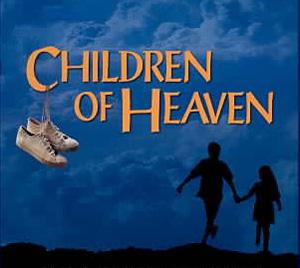 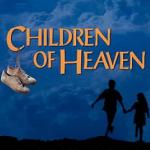 Written and directed by Majid Majidi, this Oscar-nominated bijou captured the hearts of audiences at film-festivals all over the world. Known in the Persian language Bacheha-Ye Asemanas, Children of Heaven centers around two Iranian children, Ali and Zahra Mandegar, a brother and sister from a financially struggling Iranian family. The film opens with a close-up of a tattered pair of pink mary-janes being repaired by the work-worn hands of a cobbler in a neighborhood stall on the outskirts of Tehran, where Ali, a fourth grade boy is running errands for his mother. Ali's next stop is the bakery, where he picks up a bundle of flatbread, and then to the produce market. He stows the bread and his sister's shoes among some crates outside the produce stand while he shops for a kilo of potatoes. And in the few moments it takes to rummage through the grubby bin of seconds for the best of the worst, Ali's whole world is about to change, as a ragamuffin salvage peddler scoops up the bag containing Zahra's shoes and disappears into the streets of Tehran.

Back at home, the Mandegar family is embroiled in an argument over the delinquent rent, the untended chores, and the mother's lingering illness. And in one of the film's most endearing scenes, Ali and Zahra pass notes back and forth in a spiral notebook in an attempt to secretly negotiate a game plan for concealing the matter of the missing shoes from their parents until Ali can figure a way to get a new pair for Zahra. It seems the only solution is for the two children to share Ali's ragged sneakers, with Zahra wearing them to the morning school sessions, and then swapping them in the streets at mid-day, just in time for Ali to make it to the afternoon school sessions. Although feasible, their plan is fraught with pitfalls, as the shoes are much too big for Zahra, and Ali is continually late for class. Nevertheless, they have vowed to persevere in their plan until the end of the month when their father collects his paycheck.

Things begin to look up for the Mandegar family when the father learns of an opportunity to make a tidy sum of money as a door-to-door gardener in the wealthy section of town. And as luck would have it, the third prize for a long-distance footrace at Ali's school is a brand new pair of sneakers. If only life were that simple.

Children of Heaven stars Amir Farrokh Hashemian as the hapless Ali, and Bahare Seddiqi as the dutiful Zahra, two remarkably precocious young actors in their first and only cinematic roles to date. The chemistry and affection between the two children is precious, and amid the plight and pathos of their predicament, Children of Heaven offers a rare glimpse into the everyday lives of a culture that many perceive as mysterious or forbidden, yet still conveys the message that the travails and triumphs of children and families from any culture are more alike than different.

Children of Heaven is available on VHS and DVD at Amazon.com