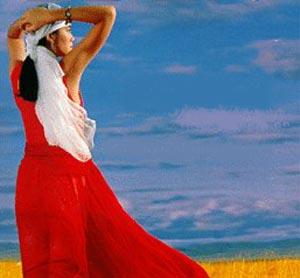 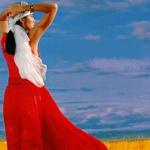 Cultures collide, both literally and figuratively, in this lighthearted romance set on the steppes of northern China, when Sergei, a Russian road builder on assignment in rural China, careens into the lives of Pagma and Gombo, a Mongolian couple who carry on the pastoral lifestyle of their homeland.

Life is good for Gombo and Pagma. Gombo rides herd all day, while Pagma tends hearth and home, and their children are rosy and robust. Their only problem, it seems, is that they have exceeded their childbearing limit with the recent birth of a third child, who, according to Chinese law, will be denied admission to school. Sex is a sensitive topic in Gombo's household, in other words, he isn't getting any. Pagma is a city girl, who has adapted to the nomadic ways of her husband, but she's also wise to the ways of contraception.

When Sergei falls asleep at the wheel of his truck and drives it into a nearby lake, Gombo comes to his rescue. And after a couple of days spent at the family's yurt, Gombo accompanies Sergei to the city, with explicit instructions from Pagma to return with a television and a box of condoms. But despite his best intentions, Gombo's misadventures in the city with Sergei leave him more than a little bewildered. And when he returns to the safety of home and hearth, things will never be the same.

The film's title in its native language is Urga, a Mongolian word for a kind of noose on a long pole, almost like a prairie flyrod used by Mongolian horsemen to capture wild horses and runaway livestock. The opening scene of the film introduces the urga as a metaphor, but by the time the credits roll, it has taken on a whole new meaning.

Within the context of romantic comedy, Close to Eden is a picture postcard of life in northern Asia, with its vast steppes and its refreshing lack of urban conveniences. Moreover, it's a reminder of life's essentials: eating, sleeping and making love.

Close to Eden is available on VHS at Amazon.com

Film Review: The Story of the Weeping Camel