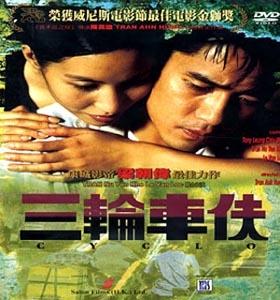 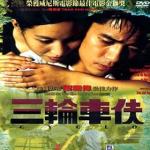 The dark underbelly of Ho Chi Minh City is the setting for this enigmatic drama by writer/director Anh Hung Tran, in which a cast of characters, known only by their archetypes, Cyclo, Poet, Sister, Friend, Madam, Grandfather, et al, seek their livelihood in some rather difficult and unsavory places. Madam runs the show, with her fleet of rental pedi-cabs, and her phalanx of henchmen, holding court in her parlor while tending her developmentally disabled son.

When Cyclo's rented pedi-cab is stolen, he is at the mercy of Madam to make amends by carrying out her bidding on a series of increasingly risky and illicit errands. Meanwhile, to help make ends meet, Sister has resorted to the world of fetish prostitution and consorting with her obsessive pimp, while somehow maintaining her virginity. Grandfather repairs bicycle tires on the city sidewalks, and Little Sister shines shoes for the patrons of a busy café. With disturbing imagery and oblique metaphor, Cyclo takes on an existential quality as the purposeless characters live out their pointless lives, slowly careening toward tragedy, but powerless to stop it.

Known in Vietnamese as Xich Lo, Cyclo is one of a small but significant constellation of films by Anh Hung Tran, that also includes the critically acclaimed Vertical Ray of the Sun, and The Scent of Green Papaya. Pacing and perspective are distinctively his, and the film stars not only impressively experienced actors such as Tony Leung, whose CV includes In the Mood for Love, Hero, and Lust, Caution, but also absolute beginners such as Le Van Loc, for whom Cyclo is the only film to his credit. Many of the actors, however, have worked with director Anh Hung Tran on his other films. Released in 1995, Cyclo was filmed in and around Saigon (Ho Chi Min City), and although it was banned in Vietnam, it screened with award-winning success at international film festivals and in cinematic release.

Cyclo is a worthy cinematic work, however, for those unfamiliar with Anh Hung Tran, it would be well-advised to begin with one of his more emotionally accessible and visually pleasing films such as Vertical Ray of the Sun, or The Scent of Green Papaya before entering the lurid netherworld of Cyclo.