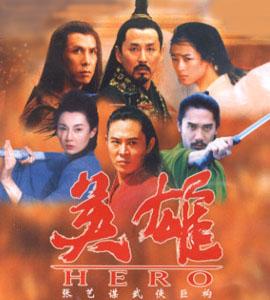 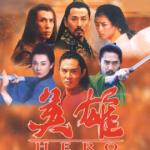 With a curriculum vitae that includes Red Sorghum, Raise the Red Lantern, Ju Dou, and The Road Home, is it any wonder that Zhang Yimou has produced yet another cinematic gem? Set in ancient China, during the rise of the Qin Dynasty, Hero uses a triptych to tell the story of a team of legendary warriors and their vengeful assassination plot to thwart the king in his draconian rise to imperial power. The comely cast includes Jet Li as the nameless main character, Tony Leung as the warrior-poet Broken Sword, Maggie Cheung as the icy beauty Flying Snow, Donnie Yen as the spear-wielding Sky, Ziyi Zhang as the devoted Moon, and Daoming Chen as the imposing Qin.

As the saga unfolds, cinematographer Christopher Doyle works his magic with the camera to capture olympian martial arts contests amid mystical landscapes, from the wind-sculpted desert, to an autumnal forest, and an ethereal alpine lake. And as will immediately become evident to every viewer, vibrant color motifs in both sets and costumes play a significant role in the visual aesthetics as well as the metaphoric imagery of the film: Black for the Qin fortress, red for the assassins' secret hide-out at a calligraphy school, blue for their clandestine meetings in the library, white for the barren exposure of the desert, and green for the lovers' pastoral retreat.

Depending upon its context, color has symbolic meaning in Chinese culture, and is associated with the five elements in traditional Chinese lore. According to Chinese ideology, red is the color of fire, and is associated with celebrations and all things auspicious. Yellow symbolizes earth, which promotes growth. It is also symbolic of power and authority, since the Chinese word for yellow is a homonym for the word royal, and the use of the color yellow is therefore limited to royalty. Green and blue are both associated with the element of wood, representing growth, harmony and longevity. The Chinese use the same word for sky blue and the green of natural flora. White represents metal, and symbolizes sorrow, grief, death and mourning. Black is associated with the element of water and symbolizes darkness and evil.

In many of his films, Zhang Yimou has used the color red as a means of making a vibrant symbolic statement. However, according to the fact file on IMDB.com, the spectrum of the color motif in Hero has been expanded to include red as a symbol for imagination, blue for perceived reality, white for truth, and green for enlightenment and peace.

The tale is a simple one of love in the time of revolution. The characters are straightforward and unpretentious in both action and motive; the dialogue is simple and direct; the plot is uncomplicated and uncontrived. However, Zhang Yimou's triptych method of storytelling makes Hero appear more complex than it actually is.

The use of digital enhancement techniques is a conspicuous element of Hero. However, its execution is masterful, and its use appears to be for art's sake rather than for gratuitous showboating. Costuming and Art Direction are flawless. Musical score by Dun Tan permeates the film with an air of melancholy, anchored by the doleful tone of a one-stringed violin. And rich, three-dimensional sound effects are obviously the handiwork of a top-notch sound crew. The result: a powerful and elegantly told love story... and a feast for the senses.

As of its original release date in 2002, Hero was the most expensive Chinese movie ever made. Due to its unbridled success in Asia, Miramax originally acquired the U.S. distribution rights. However, Miramax continually delayed its release date. Nevertheless, Hero was discovered by American audiences on unauthorized DVD's imported from the Asian underground market. After much ado, executive producer Harvey Weinstein of Kill Bill fame, negotiated a deal in which Hero would be released in its uncut version with the Midas-touch header "Quentin Tarrantino Presents," although Q.T. had nothing whatsoever to do with the production of the film.