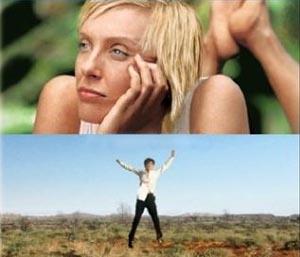 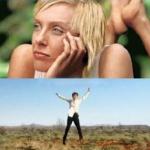 Set against the brilliant backdrop of Australia's Pilbara Desert, this cross-cultural drama unfolds between tomboyish Australian geologist Sandy Edwards (Toni Collette) and reticent Japanese steel industry representative Hiromitsu Tachibana (Gotaro Tsunashima). The two are thrust together when Sandy's boss foists upon her the task of playing tour guide to their client, which involves a five hour drive to tour the mining facilities at at Port Hedland, and babysitting him through a night of drunken karaoke. And as if that weren't enough, in what essentially amounts to corporate blackmail, Hiromitsu subtly coerces Sandy into driving him all the way to Newman to see the world's largest open strip mine, where the iron ore yield is sixty-eight percent.

Japanese Story takes its first plot turn when their jeep gets stuck in the red sands of the Pilbara, which forces Sandy and Hiro to spend a cold night together in the desert, followed by a collaborative effort the next morning to extricate themselves from their predicament, lest they die of thirst and exposure to the elements. This subtle shift in their interpersonal dynamics sets the stage for an extended road trip through the Australian outback.

As one might expect, even under these unlikely circumstances, what began as an odious corporate obligation, is transformed into a romantic fantasy as Sandy and Hiro become physically involved. Sharing the intimate confines of the jeep by day as they traverse the Australian countryside, and sharing a bed in roadside motel rooms by night as they explore their newfound sexual appetites, they begin to bridge the cultural gap toward a genuine friendship. That is, until things go terribly wrong.

Written by Alison Tilson and directed by Sue Brooks, Japanese Story is beautifully scripted and artfully imbued with subtlte irony in its pairing of genders, cultures, and values. Character development is seamless and flawless, and in the larger picture, the story pays due homage to the three essential thematic elements: man vs. nature, man vs. man, and man vs. himself. Cinematography by Ian Baker is brilliant, and the musical theme, adapted from an old Okinawan folk song, adds its own layer of irony in the lyrics:

My wife is a flower amid a bed of thorns
How happy, how shameful, to be named unfaithful
The two of us alone, yet somehow constrained
I have dyed for you a deep blue kimono
Please wear it as a sign of my affection.

Japanese Story is available on DVD at Amazon.com.