Film Review: The King of Masks 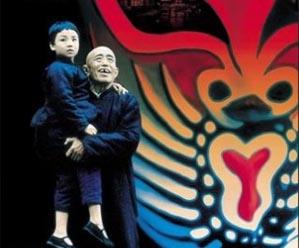 The King of Masks 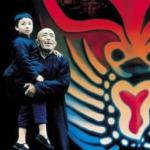 Prepare to shed a few sentimental tears with this heartfelt story of Bianlian Wang, an aging street performer in search of a protégé to carry on his unique talent for the art of mask magic. However, tradition requires that he teach his craft to a male heir, and sadly Wang's only male child died at ten years old. So Wang lives alone with his pet monkey on a ramshackle houseboat that he poles up and down the rivers of Szechuan province.

While performing his magic mask act on a crowded street during the New Year celebration, Wang's lightning-fast sleight of hand catches the eye of Liang Sao Lang, the "Living Bodhisattva", the most famous female impersonator in Szechuan. After Wang's performance, Liang invites him to come for tea at his house, where Liang offers Wang a role in his troupe. But Wang declines the offer. Liang graciously accepts his refusal, but urges Wang to pass his art down to an heir. Taking this advice to heart, Wang takes to the streets of Shanghai in search of a child for sale on the black market and makes a deal with a man who is selling his son Liu, due to the hardship of recent floods.

So happy is Wang with his new heir that he beams with pride, but his happiness is short-lived when the child reveals a dreadful secret that presents Wang with a dilemma, and sets off a string of misfortunes that threaten not only his livelihood, but his very existence.

Directed by Tian-Ming Wu, and filmed in old Shanghai, The King of Masks stars Xu Zhu as the old man, and Renying Zhou as his young protégé. The film received high praise from critics, and won prestigious awards at international film festivals worldwide.

With the oblique correlations drawn between characters, and the nuances of their relationships, The King of Masks is a masterpiece of subtlety and sentiment. Dialogue and pacing are mindfully crafted, drama is even-handed, and performances are sympathetic and sincere without being saccharine. A flawless film from start to finish.