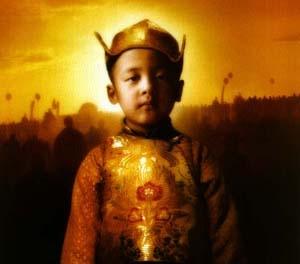 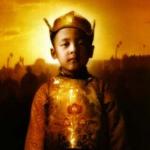 Kundun tells the story of Tenzin Gyatso, the Fourteenth and present-day Dalai Lama, from the discovery of his whereabouts and validation as the reincarnation of the Buddha of Compassion in 1940, to his fugitive flight from Tibet on March 17, 1959. The title Kundun means Presence, in reference to an honorary term of respect for the Dalai Lama. This rare film directed by Martin Scorsese stars Tenzin Thuthob Tsarong, the grand-nephew of the Dalai Lama in the adult phase of the role. Several other members of the Dalai Lama's family also appear in the film, and the entire cast features only non-professional actors. Kundun was filmed in Ouarzazate, Morocco at a time when location filming was banned in Tibet. Written by Melissa Mathison, best known as the screenwriter for E.T. (and former wife of Harrison Ford), the screenplay is based upon her interviews with the Dalai Lama himself.

The Fourteenth Dalai Lama was born Lhamo Dhondrub on July 6th, 1935 in the village of Takster in Amdo near the monastery of Kumbum in northeastern Tibet to a peasant family. At the age of three, he was recognized as the reincarnation of the Dalai Lama. Much mysticism surrounded the discovery of the new Dalai Lama. While the body of Thupten Gyatso still lay in state at the Potala, it is said that his face turned to face northeast. Soon thereafter, a vision of the house where the next Dalai Lama would be found appeared to Reting Rinpoche, a Tibetan regent, as he gazed into Lake Lhamo Latso in southern Tibet. He saw the letters Ah, Ka, Ma, along with the image of a monastery with a jade green roof, and a humble house with a turquoise roof and unusual gutters.

For the letter Ah, a search party was sent to Amdo in the northeastern province of Tibet, and then to the Karma Rolpai Dorje monastery in Kumbum, with its turquoise roof, for the letters Ka and Ma. There they found the house with the unusual gutters. A search of the surrounding villages revealed a house with an ancient juniper bush on the roof, where they sought lodging for the night. There they found an infant boy named Lhamo among the members of the household. The leader of the search party, pretending to be an ordinary servant, played with the child, who took to him instantly and called him Sera Lama, for the name of the monastery where the lama had once been a disciple. A few days later, the party returned with a collection of personal artifacts that had belonged to Thupten Gyatso, the former Dalai Lama, including rosaries, drums and walking sticks. When presented to the child along with other items that had not belonged to the Thirteenth Dalai Lama, the boy Lhamo claimed all the correct items as his own. Convinced that the child was the true reincarnation of the Dalai Lama, he and his family were taken to Lhasa by the search party, who paid a substantial ransom to the Chinese provincial governor for the boy's release.

Tenzin Gyatso was enthroned on February 22, 1940 in the Potala Palace at Lhasa at age four. His eighteen-year spiritual training began at the age of six, and was completed when he received his Ph.D. in Buddhist Philosophy at age 25. In October 1950 however, in the midst of his training, The People's Liberation Army of China invaded Tibet, and Tenzin Gyatso assumed full power as the Fourteenth Dalai Lama on November 17, at the age of fifteen. Political unrest continued to escalate, and by 1959, the Dalai Lama was forced to flee Tibet for India with nearly 80,000 followers. On March 17, 1959, the Dalai Lama escaped from the summer palace at Norbulinka with his family.*

With Melissa Mathison's screenplay as his guide, and brilliant cinematography by Roger Deakins, Scorsese spins a marvelously true-to-life epic, coaxing sincere and poignant performances from an extensive cast of non-actors for whom Kundun was their first and only cinematic role. Kundun's portrayal of the China-Tibet conflict is remarkably even-handed, and never loses sight of the Dalai Lama's persistent directive to maintain the sovereignty of Tibet through peaceful, non-violent means. Kundun received Academy Award nominations for Best Art Direction and Set Decoration, Best Cinematography, Best Costume Design, and Best Musical Score, but the film did not win an Oscar since it competed in the same year that Titanic swept the Academy Awards. Nonetheless, in the realm of historical cinema, Kundun is as good as it gets.

*Historical information about the Dalai Lama was excerpted from my ThingsAsian article: The Fourteen Dalai Lamas of Tibet.