Film Review: Lagaan - Once Upon a Time in India 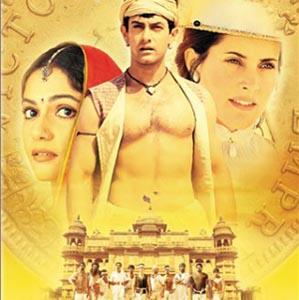 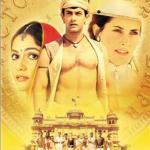 The year is 1893 in the fictional village of Champaner in the Central Indian province of Madhya Pradesh, where the impoverished inhabitants are not only under the tyrannical rule of the merciless British captain Andrew Russell, they are in the throes of a drought that has rendered them unable to pay their annual 'lagaan', a land tax which requires that they render a percentage of their now non-existent crops.

Up until now, the local rajah has kindly waived the lagaan until the monsoons return. But the arrival of the British cantonment has forced the him to make his own tithe to the colonial overlords in exchange for so-called 'protection from invaders', and therefore the rajah is powerless to continue extending his magnanimous beneficence toward the local farmers.

One afternoon, while Captain Russell is out on a hunting expedition, he discovers that Bhuvan, a handsome young villager has been two steps ahead of him all day, hiding in the bushes, pitching stones at the gazelles to frighten away the captain's quarry. A few days later, when the issue of the delinquent lagaan arises, Captain Russell recognizes Bhuvan, and in an act of retribution, challenges Bhuvan and the villagers to a cricket match as a means of settling the score. In a tense exchange of testosterone-laden bravado, the stakes are raised to triple or nothing, with the loser paying the lagaan. Moreover, Bhuvan has only three months to prepare his team for the tournament that will decide the fate of his village.

Despite their predicament, the villagers are seemingly happy, if not content. They still have faith that with the right offering and prayers to the gods of the temple, Champaner will thrive once more. Life and love go on for Bhuvan and the beautiful maiden Gauri, a pair of young lovers engaged in the customary ritual of courtship, until the day that the village soothsayer foresees an obstacle to Gauri's hopes for marriage.

Enter Elizabeth Russell, the newly-arrived sister to the captain, and a vision of pristeen loveliness in her Battenberg laces under a ruffled white parasol. Elizabeth takes pity on the plight of the villagers and kindly offers to teach them the rules and strategies of cricket, which coincidentally is quite similar to a game played by the children of Champaner, and a love triangle is formed.

In a sequence of scenes vaguely reminiscent of both 'Major League' and 'The Seven Samurai', Bhuvan manages to assemble an unlikely and reluctant band of eleven cricketeers, each chosen for his unique but unapparent athletic abilities. And after the requisite montage of trial-and-error-and-error-and-error practice sessions, the Champaner cricketeers are as ready as they'll ever be for the big day.

At 224 minutes, Ashutosh Gowariker's 'Lagaan' is almost as long as an actual cricket match, but by the time Bhuvan steps up to the plate for the inevitable deciding pitch, you'll find yourself riveted to your seat, cheering on the rag-tag team of villagers giving it their all in a do-or-die challenge against the British 'feringhees' in their tidy-whitey's. For a 'battle without bloodshed', those Boys of Indian Summer sure know how to put the 'bat' in battle.

Lagaan is available on DVD at Amazon.com