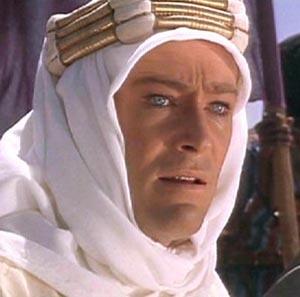 Peter O'Toole is Lawrence of Arabia 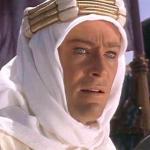 One of cinema's greatest epics, Lawrence of Arabia is based on the life of T.E. Lawrence, a British scholar and archaeologist with extensive expertise in Middle Eastern language, culture, and history. The story takes place in the midst of World War I, when Lawrence (Peter O'Toole) was dispatched to Saudi Arabia by the British army as a military intelligence officer to aid in the uprising of the Bedouins against the Turks.

On his first assignment, Lawrence was sent by horseback from Cairo to Medina to find Prince Feisel (Alec Guiness) at Wadi Safra. On his journey through the desert with a Bedouin guide, Lawrence is intercepted by Ali ibn el Karish (Omar Sharif), an emmisary of Prince Feisel who would remain his companion and counsel throughout the film. As he continues his search for Prince Feisel, Lawrence meets Auda Abu Tayj (Anthony Quinn), the proud and defiant leader of the Howitat Bedouin clan.

In his interaction with the tribal leaders, Lawrence comes to understand the dynamics of the British military subterfuge within the context of the conflict between the Bedouins and the Turks, who have taken possession of Aqaba, a strategic city at the northern end of the Red Sea. In a bolt of inspiration, Lawrence hatches a plan to cross the perilous Nefud Desert on camelback, with an army of fifty of Prince Fiesal's hardiest men, and mounts an attack on Aquaba's unprotected flank along the desert perimeter to seize the city from the Turks. With Aqaba now in Bedouin control, Lawrence heads west across the Sinai Desert to the Suez Canal, where he catches a ride back to Cairo with a military jeep to report his brazen success to British Generals Lord Edmund Allenby and Sir Archibald Murray.

Although Lawrence has proved himself to be a headstrong liability in the machinations of British military strategy, the powers that be also recognize him as an invaluable asset, not only for his knowledge of the desert and its people, but also for his intrepid spirit. With only a day to quench his thirst and dust off his caftan, Lawrence heads back into the Saudi desert with a band of Bedouins and an arsenal of British weaponry to sabotage the Turkish military. But for all his heroic efforts, Lawrence eventually comes to realize that, despite his well-meaning sincerity, he has been nothing more than a flamboyant pawn in a much larger political agenda.

Directed by David Lean, and winner of seven Academy Awards, Lawrence of Arabia is one of classic cinema's most siginificant works. Peter O'Toole's portrayal of T.E. Lawrence is carried out with both pathos and panache, in his struggle of man versus man on the battlefield, man versus nature in the searing desert, and man versus himself, walking the fine line between his own morality and the sometimes brutal consequences of his presence in an alien culture. Nevertheless, his diplomatic relationships with his Arabian allies and his British superiors are carried out with foresight and finesse. And within his acts of bravado, he also demonstrates that "Allah favors those who are compassionate."