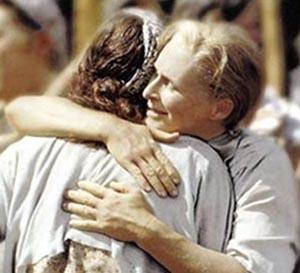 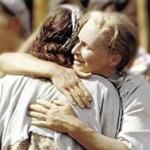 How silent is this place
The brilliant sunshine filters through the trees
The leaves are rustled by a gentle breeze
A wild and open space
By shrubs pink-tipped, mauve blossomed o'ergrown
A hush enfolds me, deep as I have known
Unbroken save by distant insects' drone
A jungle clearing, a track, through which we bear our load to Him
It is our Paradise Road
Amid the horrors of life in a Japanese POW camp on Bangka Island, across the Bangka Strait from Sumatra, forty women lift up their voices in a triumph of the human spirit over the atrocities of war. In his 1997 film, through the characters of Margaret Drummond and Adrienne Pargiter, screenwriter/director Bruce Bereford celebrates two remarkable real-life women, Margaret Dryburgh and Norah Chambers, in their efforts to transcend torture and starvation through the power of music.
The film begins on the evening of February 10, 1942, in a grand ballroom at the Raffles Hotel in Singapore, where a large crowd of soldiers, nurses, elite British diplomats, military officers, international businessmen and their wives are gathered for a night of revelry at a gala ball. Gossip and small talk abound at tables around the dance floor, until an explosion nearby rocks the scene and a colonel takes the stage to announce that the Japanese have crossed British lines and are about to take the city of Singapore. The city is expected to fall within an matter of hours, and all foreign women and children are advised to evacuate.
As the men head off to battle, the women and children board a Red Cross ship, the Prince Albert, bound for Australia. Close quarters and minor discomforts spark petty grievances, until the ship is attacked by Japanese war planes, and the real ordeal begins. When the ship sinks, the seemingly fortunate survivors struggle to shore on the island of Sumatra. Here the story zooms in on three women in particular: Adrienne Pargiter (Glenn Close), the wife of a British civil engineer; Rosemary Leighton-Jones (Jennifer Ehle), a naive young newlywed; and Susan McCarthy (Cate Blanchett), a demure Australian nursing student. As they trudge along a rural road, they are picked up by a Japanese officer, who menaces, "If war has begun, the time for rules has ended."
Along with a diverse group of Australian nurses, English women from Singapore and Malaysia, Dutch women from the East Indies, Protestant missionaries and Catholic nuns, the three women are interned at a prison camp in Muntok, where they are subjected to the cruelest of torment and living conditions at the hands of their captors. Starvation and inhumane punishment are the daily routine, as is the wanton execution of their fellow-prisoners, sometimes for the least infraction.
In the beginning, the women sequestered themselves in nationalist groups, eyeing each other with disdain and suspicion. But over time, these opposing forces began to unite against their common enemy. In a pivotal scene, Adrienne Pargiter finds solace in missionary Margaret Drummond (Pauline Collins) with a shared love of music, and thus the vocal orchestra is formed.  "Not a choir," says Adrienne Pargiter. "A Vocal Orchestra."
In a good historical account of the entire ordeal on the Australian War Memorial website, Hank Nelson writes, "Norah Chambers, who had trained as a violinist at the Royal Academy in London, copied the scores, and Dryburgh and Chambers arranged them for voices. The women did not imitate instruments, but by humming on selected consonants and singing sounds rather than words, they created their own unique art. Dryburgh and Chambers combined other qualities to persuade and inspire forty women to train for long hours, and then perform at such a level that they could momentarily liberate themselves and their listeners from their squalid camp."
Together they recalled from memory, arranged, transcribed, rehearsed, conducted and performed dozens of musical works, including Largo from New World Symphony by Antonin Dvorak, No.20, C Minor by Frédéric Chopin, Bolero by Maurice Ravel, Cello Concerto in E Minor by Edgar Elgar, and Jupiter from The Planets by Gustav Holst. And the lasting friendships that were formed, and the musical legacy they created in the process continued long after the liberation of the survivors at the end of World War II.
Paradise Road sparked much controversy for the liberties taken with the actual facts and events, especially with regard to the massacre of more than one hundred of the ship's survivors by the Japanese military on the beaches of Sumatra that took place just before the internment of the women in the Muntok prison camp. However, even stern critics acknowledge that the film is not so much about the war, as it is a tribute to the transcendent music and the indomitable spirit of the women who created it.
* * *
Paradise Road is available on DVD at Amazon.com.
* * * * *