Film Review: Before the Rains 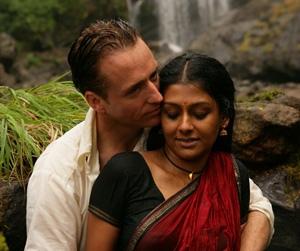 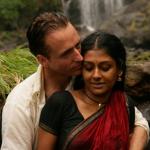 The Kerala region at the southern tip of India is the setting for this colonial drama, in which Henry Moores, an ambitious spice merchant, is establishing a plantation in the fertile jungle, and with the help of T.K., local partner and confidant, he is urgently attempting to construct an access road to it before the monsoon season begins.

The plot wastes no time dropping in on an ongoing affair between the lord of the manor, and Sajani, a beautiful villager who keeps house for him. With an empty honey jar as both excuse and metaphor, they head off into the jungle to rob the bees of their nectar, and to make a detour to a nearby waterfall for an afternoon tryst. But in the midst of their passion, they are interrupted by two young boys who recognize Sajani, and news of her infidelity soon finds its way to both the village council, and Rajat, her jealous husband. Suspicions are cast upon T.K. as her mystery lover, since he and Sajani have been friends since childhood.

With the arrival of Moores' wife Laura and son Peter, tensions are on the rise as Sajani is relegated once again to the role of housekeeper and handmaiden. Not to be dismissed and played for a fool, Sajani asserts herself with Moores, and when their romance takes a tragic turn, the villagers begin to investigate why Sajani has gone missing. And although there's no mystery what happened to her, there's plenty of suspense surrounding the inevitable consequences.

Director Santosh Sivan has a long history as a cinematographer, including the seductive Mistress of Spices. Before the Rains is adapted from a screenplay by Dan Varete for an award-winning Israeli film titled Asphalt Zahov. Linus Roache, best known for his role as ADA Michael Cutter on NBC's Law & Order is aptly cast as Henry Moores, the aristocratic interloper in an established tribal culture. And leading lady Nandita Das has an impressive CV as an actress, she recently starred in film-festival Ramchand Pakistani, and has won awards for her directorial debut with the edgy, culture-clash expose Firaaq. With such a cinematic pedigree to its credit, and without excess histrionics and overwrought plot twists, Before the Rains represents straightforward storytelling at its best.