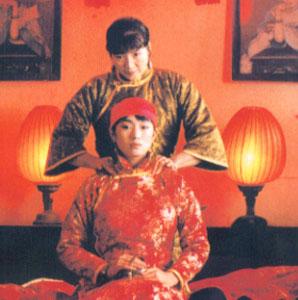 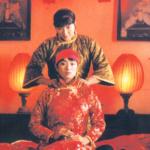 Rivalry, treachery and conspiracy abound when concubine number four joins the palatial household of a wealthy Chinese aristocrat, where his other three wives are already ensconced. Wife number one is the aging matriarch, and mother to the first male heir, an esteemed and powerful position of seniority. Wife number two, Zhouyun, mother to a less desirable girl child, is well aware that the bloom is off the rose, and is therefore suppliant and servile in her demeanor. Wife number three, a famous former opera singer named Meishan, is not only mother to the second male heir, but is still quite young and beautiful...and very spoiled.

Enter wife number four: Songlian, a fresh-faced university student who, through the misfortune of her father's untimely death, has been left without an inheritance, and has resigned herself instead to live the life of a concubine. Her position as number four in the household pecking order is fraught with subtle irony, as her youth and beauty make her the woman of choice for the master's sexual pleasure, but her low-ranking position in the wifely hierarchy gives the others a distinct advantage over her otherwise.

Yet, for all their compromises and sacrifices, the master's four wives live in the lap of luxury. Each has her own richly appointed quarters within the palace walls, a wardrobe of the finest silk robes, a servant girl to attend to her every whim, the very best medical care money can buy, and lavish meals served up daily in a communal dining room.

Nevertheless, there are rules, and the rules are simple: Each afternoon, Chen Baishun, the master's valet, announces which wife the master has chosen to spend the night with, and orders the lighting of the red silk lanterns outside her quarters in honor of the occasion. As a reward, the chosen one gets a soothing foot massage, the pleasure of the master's company for the evening, and the right to dictate the next day's menu. And simple though they are, the ways in which the rules are applied give rise to a complex and deceptive female dynamic in which nothing is as it seems.

It isn't long before young Songlian gets wise to the way things work, and is soon caught up in the daily rivalry, as each wife tries to plot and scheme her way into the master's favor. And as if the competition weren't fierce enough, Yan'er, a pretty servant girl assigned to Songlian, had long been dreaming of becoming the master's concubine, and is therefore openly resentful and defiant in her duty to serve Songlian.

The lighting of the lanterns is carried out with great ceremony and fanfare each evening, as the other three wives look on in envy; and one would think that a wise wife would give her all to please the master on the night she has been chosen. But instead, they can all be peevish and demanding at times, vexing the master with their petty grievances.

The stakes grow higher and higher with each passing day, as the women forge secret alliances, not all of which are sincere. And before the credits roll, it will be revealed that one of them has "a Buddha's face and a scorpion's heart."

Director Zhang Yimou is known for his use of the color red as both a symbol and a motif in his films, which include Red Sorghum, Ju Dou, The Road Home, and Hero. Architecture and landscape often play a significant role as well, as does music and sound. So powerful are these elements that they take on a life of their own, as vibrant and dimensional as the characters themselves. Favorite leading lady Li Gong plays Songlian with both passion and resolve, while the supporting cast of wives each brings her own unique qualities to her role. And although they are rivals, together they create a gestalt that is unrivaled in cinematic quality and power.

Raise the Red Lantern is a magnificently crafted work of cinematic art, imbued with exquisite irony, highly complex and compelling characters, amid an atmosphere of opulent visual beauty. A 'must see' for any Asian film lover, and a 'must have' for any collection.

Raise the Red Lantern (1991, with English subtitles) is available on VHS and DVD at Amazon.com.