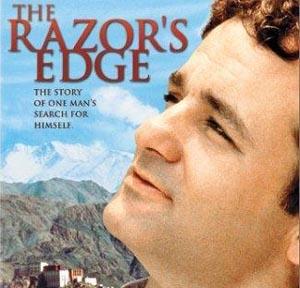 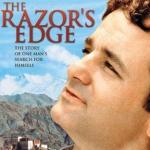 "The sharp edge of a razor is difficult to pass over; thus the wise say the path to Salvation is hard." -Katha-Upanishad.

It's the Fourth of July in Lake Forest, Illinois, the heartland of America. Stars and stripes wave amid salvos of fireworks and the rousing anthems of John Philip Sousa. Outside this pastoral bubble, the world is at war, and the good folks of Lake Forest are donating a military ambulance to the cause. Larry Darrell (Bill Murray) and his friend Gray Maturin (James Keach) have volunteered to transport the vehicle to the front lines in France to drive combat victims to safety, leaving behind Larry's starry-eyed fiancée, Isabel Bradley (Katherine Hicks), and his former girlfriend Sophie MacDonald (Theresa Russel).

But Larry returns from the war a changed man. One who no longer wants to tether himself to a picket-fence marriage and a materialistic corporate career. So off he goes to ‘find himself' in Paris, where he lives a bohemian lifestyle in a squalid walk-up flat, works a series of menial jobs, including fish packer and coal miner, and reads every book he can get his hands on. When a fellow coal miner loans him a copy of the Upanishad scriptures, Larry goes on a trek to the Himalayas to seek enlightenment.

There he meets Raaz (Saeed Jaffrey), who shepherds him to a lofty temple, where a wise Buddhist lama (Kunchuk Tharching) is waiting to impart his wisdom. And when the lama sends Larry alone to a hut at the summit for a few days of quiet reflection, his quest for enlightenment is complete, but his journey has just begun. Upon his departure from the temple, Larry leaves the lama with the words, "It is easy to be a holy man on the top of a mountain." To which the lama replies, "The path to salvation is narrow and as difficult to walk as a razor's edge."

Back in Paris, at the mansion of Isabel's Uncle Elliot Templeton, Larry discovers that nothing is the same as he left it. Isabel has married his friend Gray Maturin, and Sophie is a grieving widow who has turned to prostitution after her husband and son were killed in an accident. The stock market crash of 1929 has taken its toll, and Uncle Elliot is in failing health. Both Isabel and Sophie are still clearly in love with Larry, but when Larry and Sophie develop a romantic relationship and announce their engagement, Isabel shows her true stripes.

The Razor's Edge, based on the novel by W. Somerset Maugham, draws to a great degree on Maugham's own experiences as a member of the Literary Ambulance Drivers, a group of writers including Ernest Hemingway and E. E. Cummings, who served for the British Red Cross. However, this 1984 cinematic adaptation The Razor's Edge takes considerable liberties with the original text. The autobiographical role of Maugham himself as an expat writer is absent from the story, as is his conversation with Larry at the story's end in which the details of his enlightenment are finally revealed.

With a screenplay co-written by Murray himself, and the casting of his real-life brother, Brian Doyle-Murray, in the role of Piedmont in Act I, The Razor's Edge feels as much like a labor of love as a commercial project for Bill Murray. However, to his role as Larry Darrell, he brings his modern phrasing, his naturalistic mannerisms, and his trademark dead-pan humor, which renders him less than believable at times in his portrayal of a character of that era. And this screen adaptation of Maugham's story left me wishing that far less time had been spent examining his romantic misadventures, and craving far more focus on the Himalayan trek that resulted in his enlightenment. Nonetheless, The Razor's Edge made its point, and is engaging and entertaining as a cinematic work of historical fiction well worth watching.

The Razor's Edge is available on DVD from NetFlix and Amazon.com.