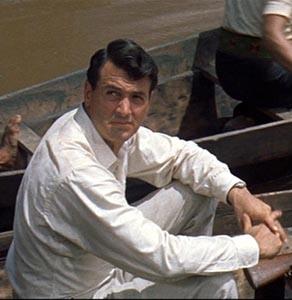 Rock Hudson is Dr. Anton Drager in The Spiral Road 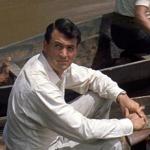 "There are no athiests in foxholes."

In this 1962 film adaptation of the novel by Jan de Hartog, Rock Hudson plays Dr. Anton Drager, a young doctor assigned by the Dutch government to serve out his five-year internship in colonial Indonesia. Upon his arrival in Jakarta, known then as Batavia, Dr. Drager wastes no time convincing the head of the medical missionary program to assign him to the mentorship of Dr. Brits Jansen (Burl Ives), a curmudgeonly pioneer in the treatment of leprosy. Drager makes no secret of his intent to avail himself of Jansen's research so that he might return to the Netherlands as a leprosy expert himself.

Drager is dispatched to Jansen's outpost upriver, where an epidemic of bubonic plage is raging among the villagers. He arrives just in time to see the village burned to the ground, and to diagnose the early symptoms of leprosy on the tribal sultan's hands. Surrounded by a team of Salvationist missionaries, Drager makes no secret of the fact that he is an athiest, an ideology that he is all too willing to debate over cocktails with the country club set, which includes Harry Froelick and Captain Willem Watterus, the wardens of two leper colonies in the Indonesian jungle. Drager's arrogant candor doesn't win him any favor with the locals, nevertheless, he rolls up his sleeves and dedicates himself to the task of serving Dr. Jansen's needs and ministering to the sick.

Drager is fully immersed in his work when his fiancee, Els Vandeef, arrives in Jakarta with a boatload of diplomatic dignitaries. In an impulsive moment, upon fleeing a lavish dinner that had turned to drunken debauchery, they dash off to the local chapel to be married. Much to the disapproval of Dr. Jansen, Els will be staying in Jakarta while Drager continues his work upriver, where he is secretly compiling Jansen's notes on his work with the lepers.

When word reaches Jakarta that something is amiss with Harry Froelick, Drager travels upriver to investigate, only to find Froelick in the clutches of madness, a condition the locals believe is caused by the evildoings of Burubi, a tribal witch doctor. When Froelick attacks Drager with a machete, Drager is forced to shoot him in self defense.

Back in Jakarta, Drager debates with Captain Watterus over the power of medicine to "turn a sinner into a saint". To which Watterus replies, "We begin in the wilderness, all of us, lost and afraid, but with a choice: To take the spiral road upward, leading to God; or to remain in the darkness and degenerate back to the animals." And in this scene, Drager reveals to Els that he is the son of an abusive minister who browbeat the Christian faith into him as a child. So, even as a boy, Drager had cursed God and declared himself master of his own destiny.

When Froelick's replacement at the leper colony is also taken ill, Drager travels upriver once again, this time deciding to stay and challenge Burubi himself. After all, he doesn't believe in religion of any kind, whether Christian or pagan. But Dr. Anton Drager will soon learn that looking death in the face makes believers of us all.

Directed by Robert Mulligan of To Kill a Mockingbird fame, The Spiral Road, with its linear storytelling, stylized dialogue, and contrived character development, is a classic example of 'old school' filmmaking. Nonetheless, its depicion of Indonesian culture within the context of Dutch colonialism is excellent. And the question it raises regarding whether a man can exist without a human support network and belief in a higher power is genuinely thought provoking. So, despite the Christian cliche that serves as the moral of the story, The Spiral Road is a rare classic worth watching.