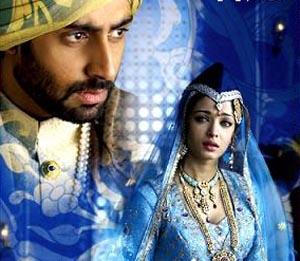 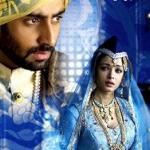 Based upon the 1899 Urdu novel Umrao Jaan Ada by Pakistani author Mirza Hadi Ruswa, the 2006 remake of Umrao Jaan by director J.P. Dutta stars Aishwariya Rai in the title role, with Abhishek Bachchan as the handsome prince who steals her heart.

This epic tragedy begins in 1840 in the town of Faizabad, where a little girl named Ameeran is the apple of her father's eye. But when her father's incriminating testimony lands Dilawar in jail, he has made an enemy for life. Once freed, Dilawar exacts revenge on Ameeran's father by kidnapping his beloved daughter and transporting her to the city of Lucknow, where he sells her into servitude to Khannum Jaan, the madam of a famous brothel.

There she is renamed Umrao Jaan, and is adopted by Bua Hussaini and Maulvi Sahib, who take on the task of schooling the young courtesan in the refined pleasures offered by the brothel. Umrao shows promise as a dancer, singer, and poet, and as she matures, she becomes a rare beauty who captivates the hearts of all who gaze upon her. But only one will win her love: Nawab Sultan, a handsome prince who falls in love with her at first sight.

But what begins as a fairy-tale romance turns tragic when Nawab kills a rival suitor in a jealous rage and becomes a fugitive from justice. And when Nawab's wealthy and powerful father disinherits him for keeping company with a courtesan, Nawab is exiled to his uncle's estate in Grahi. In his absence, Umrao is wooed to no avail by a dark suitor named Faiz Ali, until he invites her to join him at his home in Daulatabad, not far from her beloved Nawab in Grahi. And it is Umrao's duplicitous decision to accept his offer that becomes her ultimate undoing.

Historically, Umrao Jaan Ada is not a fictional character, but a renowned courtesan and poet from the city of Lucknow, who recounted the story of her life to the Mirza Hadi Ruswa at a poetry gathering. Since then, the story of Umrao Jaan has been made into this and several other films, and is the theme of a Pakastani television series.

Umrao Jaan is long at 189 minutes, features ten musical performances, and contains dialogue in both Hindi and Urdu. Although the story takes place in Lucknow in the state of Uttar Pradesh, much of the filming took place in palaces around the city of Jaipur, Rajasthan. Supporting cast for Umrao Jaan includes Shabana Azmi as madam Khannum Jaan, Sunil Shetty as Umrao's dark suitor Faiz Ali, Divya Dutta, Puru Raajkumar, and Ayesha Jhulka as her brothel siblings, and Himani Shivpuri and Kulbhushan Kharbanda as her adoptive parents. The opulent costumes worn by Aishwariya Rai and her supporting cast were designed by Bindiya Goswami and Anna Singh, and all of her jewels were genuine. Aishwariya Rai is a former beauty queen with more than forty film titles to her credit. And on April 20, 2007, she married her leading man Abhishek Bachchan.

With its luxurious sets and costumes, Umrao Jaan is dazzling to the eye, and co-stars Aishwariya Rai and Abhishek Bachchan are beautiful beyond description. The musical soundtrack is a strong aesthetic element, and Umrao's story is both compelling and stirring. And although it is flawed by overly-stylized acting and the subtitles are amateurishly translated in places, Umrao Jaan is worthy of watching for its tragic beauty.