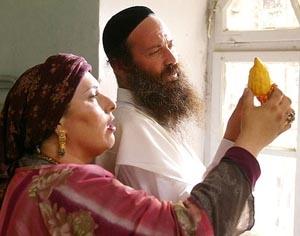 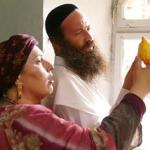 It's the eve of the Sukkot celebration in Jerusalem, and Moshe and his wife Mali have no money to pay for the traditional feast and the building of a sukkah, a temporary shelter where Jewish families typically spend the week of Sukkot. Not only are they behind in their rent, and the cupboard is bare, they have been trying in vain for years to conceive a child, and Mali blames their woes on Moshi for not praying hard enough at the temple.

In this eleventh hour, it becomes clear that only a miracle will bring them the Sukkot of their dreams. When Moshe's name is randomly chosen from a list of petitioners at the temple, by an executor in charge of deciding who will receive a monetary windfall bequeathed in the will of a deceased patron, and on the other side of town, Moshe's friend has found an unused sukkah that he can use as a shelter for the week, it's a Sukkot miracle! In the space of a single afternoon spent in devout prayer, the perfect Sukkot celebration has suddenly fallen into place for Moshe and Mali.

Meanwhile, in Tel Aviv, a convict has escaped from prison, and is on his way to Jerusalem with a fellow escapee to take refuge with his old friend Moshe. And because the Sukkot tradition includes welcoming visitors into the sukkah to share in the celebration, Moshe has no choice but to invite them to dinner. Mali has prepared a feast, there's plenty of wine, and Moshe has even purchased a citron of great value as an offering, in hopes of being blessed with a son. But predictably, things go awry with the two felonious houseguests, and Moshe and Mali begin to wonder if they have been so richly blessed after all.

Ushpizin is a magnificently simple tale, told with heart and humor, amid a setting of rich Jewish tradition. Directed by Giddi Dar, who came out of retirement to make the film, it stars Shuli Rand as Moshe, and Michal Bat-Sheva Rand, the director's wife, as Mali. Darkly comic performances by the trouble-making convicts, Eliyahu and Yossef, are rendered with subtle authenticity, with the Sukkot celebration to provide the spotlight. A rare gem in the realm of international cinema.