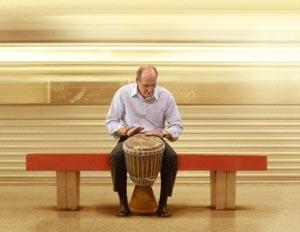 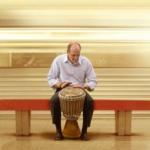 When Walter Vale, a widowed Connecticut college professor, travels to New York to deliver a speech at an eco-conference, he discovers that Tarek and Zainab, an illegal immigrant couple, have taken up residence in his seldom-used apartment without his permission. Instead of having them arrested, Walter takes the more compassionate approach of allowing them to stay until they can make other living arrangements.

Life is stilted for the first few days, as Tarek, a drummer from Syria, and Zainab, a jewelry designer from Senegal, do their best to show their gratidude and try not to impose upon Walter. As they warm up to each other, Tarek coaxes Walter into his musical world with drum lessons and invitations to his gigs. Reluctantly, Zainab follows suit, and before the week is out, the beginnings of friendship have formed between the three unlikely roommates.

Just when it seems as though Walter might allow Tarek and Zainab to become permanent tenants of his unoccupied apartment, Tarek jumps a jammed subway turnstile and is carted off to jail. With no green card, his next stop is a holding cell in a deportation facility. All the while, Zainab doesn't dare visit Tarek for fear of being locked up and deported as well.

Walter goes far beyond the call of duty when he hires an immigration attorney for Tarek. And when Tarek's worried mother Mouna shows up unannounced, Walter offers her both refuge and solace. But instead of returning to academic life in Connecticut, he is drawn into the unfolding drama of their lives.

Written and directed by Thomas McCarthy, The Visitor is a compelling drama that examines macrocosm of social and political injustice within the context of intimate human relationships. An Oscar-nominated performance by Richard Jenkins as Walter Vale is all the more transcendent with the seductive charisma of Haaz Sleiman as Tarek, the edgy disquietude of Danai Gurira as Zainab, and the noble grace of Hiam Abbass as Mouna Khalil. While the tale may be predictable in its spinning, it masterfully avoids the saccharine in its denouement. And with its equally powerful characters and artful nuances, it begs the question, "Who is The Visitor?"

Recipe: A Trio of Syrian Mezza