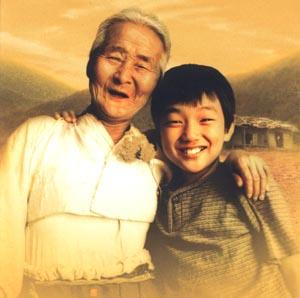 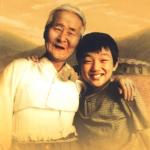 Sang Woo is seven years old. His deaf-mute grandmother is 75. Sang Woo is bratty, mischievous, rude, undisciplined, disrespectful, and spoiled rotten. His grandmother lives a simple, rustic life with few amenities...and it looks as if they're going to be stuck with each other in rural Korea for two whole months while his mother looks for work in the city. Directed by Jeong-hyang Lee, and starring Eul-boon Kim as the grandmother in a remarkable first-and-only motion picture performance, The Way Home deftly manages to pull off one of those 'heartwarming tales' without trespassing into the realm of the saccharine or formulaic.

When we first meet Sang Woo, he's on a bus with his worried and world-weary mother. It soon becomes clear that Sang Woo has gotten on her last nerve, and although she is parking him at Grandma's house for a couple of months under the auspices of looking for a job, she mostly just needs a break from his constant harangue. One look at his bent and weathered but beatific grandmother, and it's obvious where the story is going. Sang Woo has some hard lessons to learn.

The first few days are sheer torment, as Sang Woo adapts to the ways of the woods, where there is no indoor plumbing, no fast food, no TV, and worst of all, no replacement batteries for his Gameboy. And although there is a boy about his age living nearby who could easily become a welcome playmate, Sang Woo manages to alienate him on their first encounter and sparks a rivalry for the affections of the only girl in the neighborhood.

Amid his misery, depravation and boredom, the empty and seemingly endless days in the countryside provide ample time for Sang Woo to terrorize his poor grandmother. His list of cruel transgressions is shocking for a seven-year-old boy, and wherein any normal adult would have been tempted to commit infanticide on the very first day, the endlessly patient and ever humble old woman doesn't even scold him. Ironically, she often tries to spoil him the only way she knows how, but even her best efforts aren't good enough for her inconsolable grandson. The inevitable turning point in their relationship comes when Sang Woo threads a sewing needle for the old woman as she repairs the ragged bindings on her only pair of shoes. But salvation is still a long way off for this hapless and forlorn boy.

Although The Way Home is neither unique nor original in its basic storyline, what sets it apart is the portrayal of the two characters as they cope with the daily travails of their challenging environment and inescapable circumstances. And though its outcome is foreseeable, the story unfolds in its measured pace with a poignancy and pathos that cannot fail to stir the human heart.