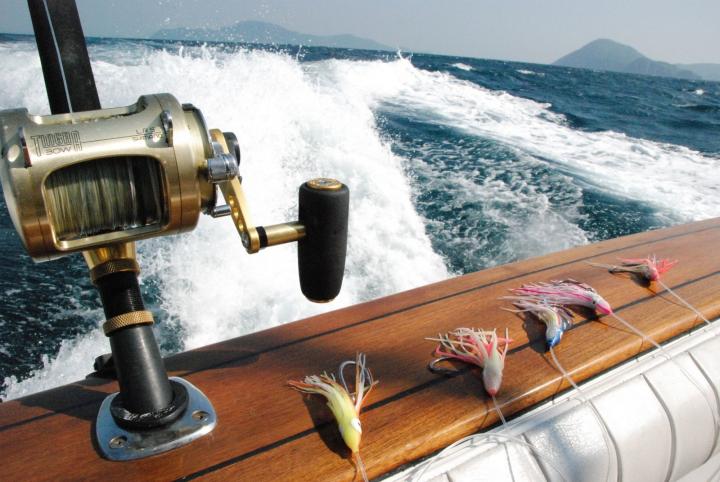 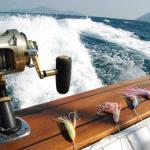 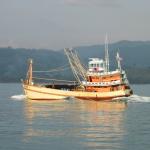 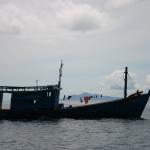 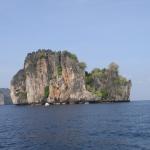 From Moby Dick to Hemmingway's The Old Man and the Sea, game fishing is the stuff of macho legend. For those Captain Ahabs among you, the seas around Phuket are swimming with opportunities to hook some really big marlins, sailfish, barracudas and tuna, or to do some nighttime fishing for sharks.

Our small vessel departed from Chalong Bay around 9am. On board were the Thai captain and a local deckhand, three experienced fishermen from the US, Belgium, and Italy, along with myself - the proud father of four Siamese fighting fish. Sticking out of holes on each side of the wooden deck, behind the cabin, were two fishing poles. Metal bars known as "spreaders" jutted out from both sides of the cabin. Two of the fishing lines were attached to them, so that the four of them would not get tangled up. Speeding along behind the boat were two lures (they look like plastic fish with hooks attached to them) and two tiny rubber squids (also with hooks attached to them). Their job is to create a commotion on the surface of the water that lures the fish.

While the boat sped along at about 20 km an hour, the four of us sat on the deck, sunning ourselves, smoking cigarettes, and talking about fishing. The young American guy, who had mirror shades, a straw fedora, and a cop's moustache, reckoned that tuna are the most difficult fish to catch. "When marlins and sailfish take the bait, they tend to swim right along the surface, so you can tire them out in half an hour or so. But tuna, they dive straight down and swim around in circles. We call that ‘the tuna shuffle,'" said Ray with a laugh. "So it could take an hour and a half to reel in a big one." Tuna, he noted, can weigh up to 65 or 70 kilos, and the biggest one he ever caught was around 35 kilos.

The Thai deckhand came around with a coffee cup filled with bottle caps. Each one had a number on it. The four of us picked out caps to see who would get to reel in the first catch of the day. Ray was first.

Two hours later we were still waiting for a nibble. At least the scenery was good - blue islands in the distance cloaked in ghostly mist, aquamarine water, and sea gypsies out fishing in long-tail boats - while the tang of the sea-salty air was bracing. As the American said, "Even the worst day fishing is still better than the best day in the office."

At noon we stopped a few km from an island. After eating a cold lunch of fried rice and barbecued chicken on board, the deckhand brought out some fishing lines wrapped around plastic cylinders, put two hooks on each line, and then attached some pieces of squid for bait. The three foreign fishermen then dropped their lines into the water and began unreeling them by hand. "So what's this kind of fishing called, Ray?" I asked.

"It's called fishing like a caveman - Third World fishing," he replied, laughing. A few minutes later, when the rain started pelting down, Ray said, "It's called get wet fishing," and then, as he put down his line and came inside the cabin, "It's called screw this fishing."

After the rain stopped, the three of them enjoyed a good run of luck, pulling up about 15 small fish (mostly garoupas) while I sat there, bored witless. Watching the dying fish flopping around on the deck, their eyes bulging, mouths agape, gills pumping, was awful. So finally, when no one was looking, I picked up two of the garoupas and put them back in the sea. On Buddhist holy days in Thailand, releasing turtles, fish, and birds is a common ritual; Thais believe that such acts of compassion increase one's supply of good karma.

In the early afternoon, we took a swimming break. The boat was in fairly deep water, so there wasn't much to see except plankton. Trying to frighten us, Ray began humming the theme song from the bloody, 1970s, great-white-shark film, Jaws.

On the way back, we did some more trolling. Ray and the Belgian guy were desperate to hook a big one. While Andre offered the captain a tip of Bt500 for helping us land a tuna, the American lifted the gold cross on his necklace up to his lips, kissed it, looked skyward, and said very seriously: "Please God, help us to catch a tuna." First the guy tried to scare us into thinking there might be a shark attack, now he was asking God to guide his fishing pole? Heaven help us....

About 10 km later, we saw a couple of dolphins. They weren't doing any leaps like they do in Disney films, or at marine parks, though. All we could see slicing through the water were their fins. Nonetheless, Ray took this as a very encouraging sign. "Sometimes tuna swim along under dolphins. They have a kind of symbiotic relationship."

Soon there was a big commotion on the deck of the boat. Everybody, except the captain, was back there watching Ray trying to reel in a fish as the boat kept speeding along. Was it a tuna big enough to feed a family of five for a week? Maybe a barracuda with razor-blade teeth? Or how about a sailfish with a massive fin? Actually, it was none of the aforementioned. What Ray eventually reeled in was a long piece of rope.

As we walked down the pier around 5pm, Ray complained again about the Thai deckhand. "If he'd tied that hook on properly, I could've caught a really big fish. That one was a whopper, and now he's swimming around with a hook in his mouth."

Well, I guess every fisherman has a tale to tell about the big one that got away or, in the case of this quasi-Buddhist fish saviour, the two that swam away.