Into the Wild of Khao Yai National Park 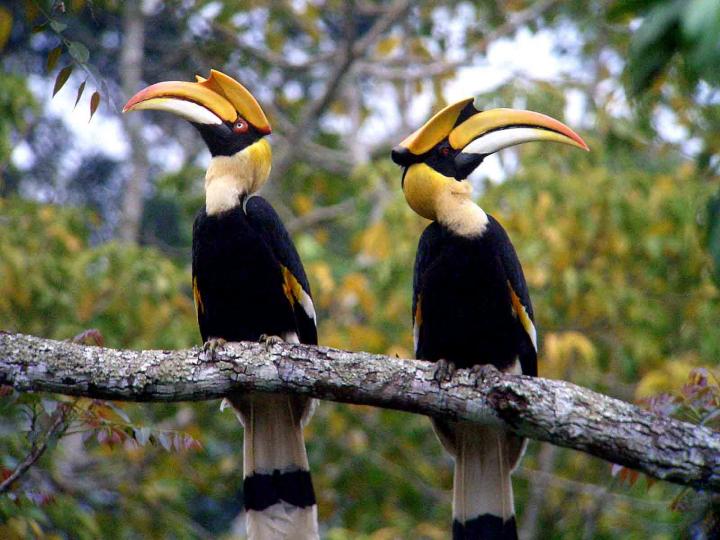 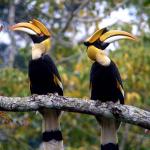 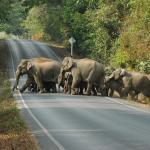 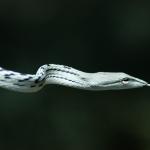 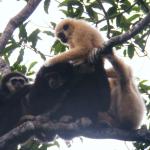 Visitors tell some wild stories about Khao Yai National Park, like seeing jackals chasing down a deer, like herds of elephants lumbering down the main road, like gibbons performing high-wire circus acts up in the rainforest's big top and, during a night safari, seeing a Malayan porcupine waddling along the roadside.

Some of these stories, I suspected, had been retouched with each retelling, so they glossed over a simple truth: With a million people visiting Thailand's biggest and oldest national park each year, even the most bird-brained of creatures should've figured out how to elude the tourist herds.

But pulling into the Visitor's Centre, we saw a sambar deer sauntering through the parking lot. The good-sized buck didn't even glance over at the photo-seekers stalking him. Nor did he quicken his pace. I liked that, but it also sent a frightening thought rocketing along my synapses: When animals lose their fear of humans, they can become much more aggressive and dangerous.

On third thought, who wants a tame day at the zoo watching panthers that may as well be paralyzed and lobotomized. "Hey, did you see that? I think he actually breathed."

The Visitor's Centre is the place to get your bearings and bone up on the park's cornucopia of creatures, from Asiatic black bears and the tiny golden cat to Siamese fireback pheasants and bamboo pit vipers. All told, there are some 350 different species of birds and around 78 kinds of mammals living within the boundaries of a park that lays claim to more than 2,000 kilometres of land and squats on corners of four provinces: Prachinburi, Saraburi, Nakhon Nayok and Nakhon Ratchasima. Most overnighters stay near the park entrance in the latter province. Leading up to the gate is an asphalt gauntlet of guesthouses and resorts. The majority offer guided daytrips of the park's environs.

It's possible to go without a guide, but you might not see the animals for the gigantic trees that cause kinks in the neck when you look up at them. So we were lucky to have the hawk-eyed vigilance of Rittichai Kengsungnoen (nicknamed the "Birdman") of Green Leaf Tours and Guesthouse. As soon as we got out of the covered pickup truck with two rows of seats in the back, he set up his telescope and spotted a couple of great hornbills up in their nest. Everyone took turns eavesdropping on these large black and yellow birds. Then our guide aligned our digital cameras with the telescope so they could see eye to eye. The shots were a bit blurry but still sharp enough to impress your Facebook friends.

Into the jungle our group of six wilderness explorers tramped. The path zigzagged through the moist evergreen forest that grips some 70 percent of the park's terrain. Under branches, over logs, we trekked. The earth was spongy, the sky spitting raindrops. Only a few minutes later did the Birdman pull his first magical trick of the day. Poking a branch into an arm-sized hole in the ground he pulled out a palm-sized scorpion. Then he snatched it up by its tail, avoiding the stinger. He looked around for volunteers. "Hold out your hand," he said. All of the trekkers suddenly looked like anxious and fidgety school kids waiting for a polio injection in the nurse's office. Finally, reluctantly, one of the guys held out his hand. The guide placed the arachnid on his palm. As digital cameras shot out quicksilver flashes, the Birdman wisecracked to everyone's amusement, "Okay, let's go."

After everyone had their turn in the view-finder, he gently placed the scorpion back in its lair. Our guide waved us on. As we walked he called out, "Awk, awk," to attract some hornbills. Everyone scanned the tree tops. But no one saw anything except for the tree tops.

Then our ears were pierced by a series of whoops. Fearful or angry, it was hard to tell. The hoots and wails went up an octave, turning into a discordant chorus. Then we saw them. Up in the trees, perhaps 50 metres away, a whole family of gibbons was swinging from branch to branch like trapeze artists. Gibbons hate getting grounded, our guide said. For hydration, they lick the dew from leaves. During the dry season, they hang from branches and scoop water out of streams.

As soon as we came close, they hushed up. But the Birdman trained the telescope on one of the white-handed gibbons, allowing us to eavesdrop on it picking and eating fruit. Then it made a spectacular descent, swinging arm over arm from branch to branch, as we looked on with awe at the creature's agility.

Further along the trail, we saw rows of claw marks going up a tree. Both Asiatic black bears and the world's smallest bear species, the Malayan sun bear, are expert climbers equally adept at raiding bee hives for a taste of honey. Upon hearing this, everyone looked up. Expecting what? A hairy hulk buzzing with bees clambering down towards us? No, bears are nocturnal, we learned.

So are many snakes. That's why the brilliant green bamboo pit viper sat coiled up on a plant only inches above the trailside, as if in a state of suspended animation. The whole group congregated for a photo shoot, but the tiny reptile paid no attention to us.

"What do snakes like this eat?" asked the Dutchman.

Within only a few hours and a couple of kilometers, we'd learned why the park was granted World Heritage Site status by UNESCO in 2005. Steven Galster, the director of operations for the NGO Peuan Pa (Friends of the Wild) said, in their Bangkok office, "Partly because of the protection system we helped to put in place there and partly because of the park's own efforts, they've gained World Heritage status. They wouldn't have done that had the park been poached out. It's rich."

When the NGO first began working there in 1999, their surveys estimated that around 500 people were entering the park illegally each day to plunder flora and fauna.

"We know those figures have dropped off, because the patrols have gone up mainly. And they [the poachers] don't wanna get caught. We've seen local traffickers in wildlife and aloe wood, which is a big commodity there, hiring illegal Cambodian immigrants to do the dirty work because they can't convince local Thais to do it anymore," he said.

For any wildlife paparazzi, the biggest star is the Asian elephant. Sometimes you see them at the salt licks where they come for a dose of calcium. Further up the trail, our guide pointed out a smear of mud on a tree. This meant that there were tuskers nearby, as they like to coat themselves with mud as a natural insect repellent.

Next on the itinerary, we hopped in the pick-up truck for a trip to one of the park's waterfalls. En route we spied a couple of tiny Eld's deer, and gangs of macaques frolicking in the trees. But the reddish salt licks were barren of beasts.

As the sun dimmed so did our prospects of seeing the world's largest living land animal in the wild. All of a sudden, our guide slammed the brakes on. In a clearing beside the road stood two guar. The largest species of wild cattle, they resemble water buffalo except their horns are yellow and black. The two herbivores were munching on grass. By the time we scrambled out of the pick-up truck, the guar had made tracks into the bush. But our guide, with a smile on high beam, showed us the perfect photo he'd snapped. "In this park I only see guar maybe three, four times every year."

Now it was night. We were driving back to Khao Yai's exit, passing signs that warned of tigers and king cobras. The wind kept spearing through our billowing T-shirts. Everyone was shivering and exhausted. Then the pick-up slowed. We all stood up and craned our heads out the sides of the truck to see a massive grey elephant lumbering down the road in the opposite direction. It was illuminated by the truck's headlights.

Watching it waddle down the road, our mouths could've served as bug-catchers. But the pachyderm was still out of sight of our flash bulbs. Then it curled its trunk and let out a bugle blast. From somewhere in the forest another elephant trumpeted a reply. The tusker abruptly turned to the right and crashed into the jungle allowing us a glimpse of his profile.

We certainly couldn't have scripted a more exciting grand finale to a day of wilderness adventures; and it sure whipped a trip to any of those prisons (and lunatic asylums) for birds and beasts known as zoos.