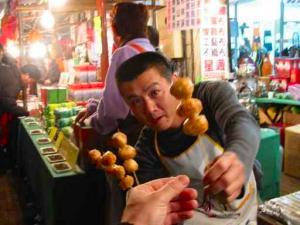 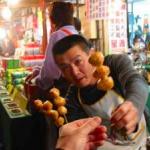 Chinese New Year in Taipei? No, dear reader, We are neither drunk nor insane; While the Taiwanese have a reputation for being all business, when the business is holiday merrymaking, they go whole hog (many whole hogs, in fact - try the aboriginal roast pork), removing all stops in the pursuit of festivity. For this, and a few other reasons, consider a visit to Taipei as, to put it into the local lingo, "a worthwhile investment for the first quarter of '03".

1 - Soak your cares away in hot spring heaven

True, Taipei isn't exactly known for its sunny February skies, but straddling the tropic of Cancer, rare are the days when your breath will be visible anywhere on Taiwan Island. More importantly, Taipei is within striking distance of three natural hot spring areas. The Taipei subway will take you to the "New Peitou" station, where you can have a soak in one of a few public springs, or rent a hotel room for about $50 US and have it piped directly into your room. From Hsintien station (the southernmost stop on the subway), it's a 30 minute bus ride up to Wulai, a mountain town where you can either soak in a private indoor tub for about $10 US, or soak in one of the public pools right on the river for almost nothing (just cross over the bridge and look for the part of the river that's steaming). Farthest from the center of the city, the springs in and around the Yamingshan park are known for being especially good for the skin. While there are several resort type places there where you can relax for as long as you like for a $4 admission ticket, there are also a couple of "natural" springs still left where you can soak in the great outdoors.

While Taipei is generally a bad place for budget travelers, in the weeks leading up to Chinese New Year, the collective spirit of one market street in particular becomes generous indeed. Tihua street is Taipei's most famous gift street, a great place to buy seasonal gifts like lung-sized chunks of pressed fish roe and vacuum packed bags of Taiwanese green tea. Most importantly for those with shallow pockets is the special status as a moocher's paradise held by Tihua Street. In the week preceding the lunar new year holiday, sampling becomes a mandatory activity, and a walk down the main avenue leaves the visitor stuffed with strange samples of all sorts -- dried fish, octopus balls, chunks of abalone, seaweed, candies and (sometimes) cheesecake. Forget about turning any of these gastronomical oddities down. The Tihua street merchants will not let any guest, especially not a westerner, go away unfed. Tihua street is also a great place to catch a puppet show, albeit one to be performed in the Fukkien dialect as in good old Putonghwa.

While normally a typically noisy and bustling Chinese city, Taipei empties out as its inhabitants head south for the first few days of the Lunar New Year holiday. This brief patch of calm an excellent time to exploring the nearly-empty city. The area south of Taipei Main station is a good place for architecture buffs, as it boasts several buildings of colonial design. Perhaps the most unusual architectural oddity in the area is the Gothic cathedral on Chungshan S. road and Chinan Rd. One of the few gothic structures in Taiwan, the cathedral was built in 1916. Fans of more traditional Chinese architecture might enjoy having a look at the five gates of the late Qing-era wall that once surrounded the city. While not well known, Taipei was, like most Qing cities, walled. Typically, our Taiwanese compatriots had to do things a little differently, building their wall with not the usual four, but five gates. While the wall is gone, the gates still stand, including the Hsiao Nanmen ('little south gate'), the fifth gate, built to settle a nasty spate of communal feuding between early Taipei residents from Zhangzhou and Quanzhou. A walking tour of all five gates can be done in a few hours.

The final few days of the Lunar New Year holiday (which this year (2003) fall around February 15th) is marked by the Lantern Festival, and the major venue for this festival of light (and snacks) in Taipei is at CKS memorial park. Expect sidewalks on all sides of the park to be completely ran shan ran hay, and the park itself to be packed with both people and colorful lantern floats depicting imagery from Chinese mythology and other, more eclectic themes. Don't be freaked out by the disembodied heads of cartoon characters floating ominously overhead (They're for the kids). Those interested in a less gaudy but more dangerous lantern festiva; should take the subway down to Hsintien and check out the riverside festival, where locals build their own paper lanterns, write their wishes on the side and set them aloft via a small fire set in the lantern's center. The lanterns rise in the air like beautiful flaming specters bearing their creator's wishes. Some lanterns ignite before obtaining the proper lift, and plummet to the ground to be inauspiciously stomped out. But even the best crafted lantern eventually catches fire and falls, hopefully into the river. But the winds in this area are notoriously unpredictable, and the surrounding neighborhoods are often barraged with flaming debris, causing the Hsintien fire brigade to earn much overtime pay.

5 - Gorge yourself on local cuisine

Naturally, we've saved the best for last. It's been said that the Taiwanese are food obsessed, so the Lunar New Year holiday is as good a time as any to experience the local cuisine. Stinky Tofu (tofu fermented to a high degree of pungency, deep-fried and served with pickled cabbage and hot sauce) is Taiwanese delicacy that is quite the acquired taste. Vegetarians will appreciate the wide variety of meat-free fare in Taipei city. The buffet table at any decent vegetarian restaurant is kept stocked with a wide variety of animal-free dishes created with beans, wheat gluten, roots, tubers, vegetables of all shapes, sizes and colors, fruits, rice of various colors and textures, spices, sauces, and of course, tofu. While Beijingers can boast about having a wider variety of lamb-k-bombs than any Chinese city east of Urumqi, fans of stuff skewered on sticks will enjoy the exotic stick fare of Taipei, such as squid, congealed pig's blood, dried tofu and chicken butt. Diehard carnivores might want to experience a culinary delight peculiar to the province, the 'Taiwanese beefsteak'. This coronary inducing monstrosity consists of a low-grade cut of beef grilled on searing metal pan, then thrown on top of a pile of spaghetti, and served with a raw egg cracked on top of the steaming slab of meat. Whether you'll want to have your open-heart surgery in Taipei or wait until you've returned home is entirely up to you. Consult your insurance company before leaving, and bon appétit!