The fortune-tellers of Tokyo 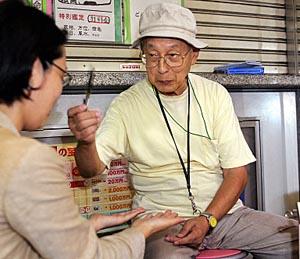 Seventy-eight-year-old fortune-teller Terutsugu Eguma attends to a customer on the street of Ginza shopping district of Tokyo. 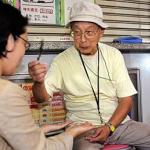 Every night when the offices close and the shops pull down their shutters, the fortune-tellers of Tokyo set up their tables in the darkened doorways, keeping a centuries old tradition alive.

"The Japanese love having their fortune told," said Terutsugu Eguma, who has been getting his palm crossed with silver -- or rather crisp banknotes -- for telling fortunes on Ginza's sidewalks for eight years. "I used to be a dentist, but I'm retired now," explained the 78 year-old. "Basically, I learned to do this from books, but I've also attended classes."

The tradition dates back to the Edo Period (1603-1867), when Tokyo became the nation's capital under the feudal rule of the Tokugawa Shoguns and saw a flourishing of popular culture -- including fortune-telling at candle-lit tables on the streets of the city then known as Edo.

Centuries later, the national fascination with destiny lives on, with magazines swamped with fortune-telling articles based on the western and Chinese zodiacs, blood types and Chinese Feng Shui. Morning television programmes provide quick updates on the outlook for health, love and money for the day or week.

Most of the fortune-tellers employ a variety of techniques including tarot cards, astrology, geomancy and palm-reading -- but a connection with some other cosmic force is a must. "You need to have the gift," said one fortune-teller who has been here for nine years, declining to give her name.

Tonight there are five people -- four young women, including one with her boyfriend -- waiting to see Hinoko, who is in her 60s and cultivates an air of mystery with a sky blue silk headscarf, big round glasses and reference books for interpreting symbols. She is said to be the oldest-established fortune-teller in Ginza. "It's payday today so there are plenty of clients -- 3,000 yen is still a fair amount of money," she said. "Having said that, the number have never decreased," she added.

The basic price for a consultation that usually lasts for five to 10 minutes is 3,000 yen (27.50 US dollars), according to Eguma, who said that some fortune-tellers get as many as 10 clients an hour.

"What she told me is not great but I'll come back if it turns out to be true," said one young woman after her consultation with Hinoko. "Many people come for advice about their marriage.... And I get it dead right," Hinoko said, adding many also want to know how their career will develop.

Ninety-eight percent of Eguma's customers are also young women concerned about their love lives, he said. "They come quite often for the three months or so that the relationship lasts. Then you don't see them again until they find someone else," he said. One of his best customers is a woman who has been coming to see him for six years. "Basically, the reason I do it is because I love to hear about people's lives. It's fascinating," he said, smiling.

While this nightly show is tolerated on streets all over Tokyo, "strictly speaking, they are not allowed to be on the sidewalk," said Isamu Kikuchi, a policeman who has been patrolling the upmarket Ginza district of downtown Tokyo for three years. In some neighbourhoods, "apparently the yakuza (organised criminals) demand money from them," he said. One of the fortune-tellers, who declined to be identified, confirmed that yakuza periodically demand a commission from some clairvoyants. "But as far as I'm concerned, I'm on good terms with them," he said. "For them, it's purely business. They never ask anything about their future," he said. "Can you imagine a yakuza asking how his affairs of the heart will work out?"