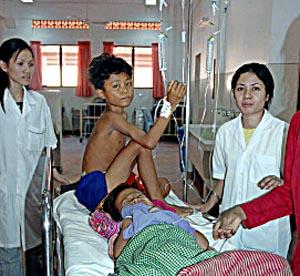 Children and nurses at the Jayavarman VII hospital in Siem Reap. 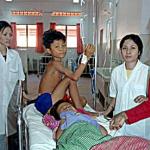 SIEM REAP, Cambodia, April 1, 2005 - Pen Naun sits breastfeeding her two-month-old baby in an airy but crowded hospital ward with scores of other fraught Cambodians, many lying on mats covering the terracotta-tiled floor.

Receiving free treatment at this gleaming six-year-old private hospital run by a maverick Swiss doctor who plays a cello to help fund its operations, they are among destitute Cambodia's luckiest patients. Naun, 31, travelled with her vomiting son Phan Chandoeun for three hours by pick-up truck along bad roads from a neighbouring province hoping that he would receive free diagnosis and treatment at this ultra-modern children's hospital.

"First I went to a private clinic in Poipet (a town near her home), but the drugs did not work so we came here," she says. The mother-of-three had to borrow 200 baht (eight dollars) from a neighbour to pay for the clinic visit and drugs, a substantial amount in a country where more than a third of the population lives on less than a dollar a day. When the vomiting didn't stop, another neighbour told her about Jayavarman VII hospital on the outskirts of Siem Reap, the gateway town to Cambodia's famed Angkor Wat temple complex. Her son, it turns out, was suffering from potentially fatal acute encephalitis. He was admitted two days ago and is likely to stay for five more. "A private clinic would not have been able to diagnose this," a doctor at the hospital says.

Cambodia's health system is shattered after nearly three decades of war which ended in 1998. Rife corruption, along with tiny salaries paid to doctors and nurses mean many take second jobs and make rebuilding an uphill battle. "A lot has been done, but on paper we don't seem to have made much progress," UNICEF's country representative Rodney Hatfield concedes. In Cambodia, the number of deaths of children aged under five per 1,000 rose from 115 to 140 from 1990 to 2003 despite mammoth efforts to improve health. And rural children suffer more: the rate was 50 per 1,000 live births in Phnom Penh compared to 229 per 1,000 in the kingdom's northern provinces.

Jayavarman VII along with two other hospitals in Phnom Penh also run by doctor Beat Richner are anomalies in Cambodia's health system, offering free treatment in spotless facilities served by more than 1,500 well-paid staff. Doctors earn between 600 and 800 dollars per month while even cleaners earn 200 dollars a month, a very decent salary in Cambodia and far more than the 30 to 40 dollars per month doctors earn in the public system. The three hospitals in 2004 treated 759,000 outpatients, admitted 70,000 children and carried out 15,800 surgical interventions. Richner's stance on free treatment, however, has earned him criticism from multilateral organisations and donors who prefer to see a user-pays system in place and who he says have accused him of subverting attempts to strengthen the system. "This is absolutely stupid to do this liberal, capitalist idea for the health sector if people have no cash ... Our idea is that all children have the right to be treated. It's only subversion of corruption," he retorts. "This is an emergency."

Cambodia's health minister Nuth Sokhom says the hospitals are a "sensitive" issue. "Some are concerned about free-of-charge services, the ones who are helping us strengthen the health system. So we are in a very difficult situation, which we have raised with the friendly countries as well as with the NGOs," he says. "We have to have a compromise between the two."

Richner says that without his hospitals, whose annual running costs of 15 million dollars are almost completely provided by international donors, 60,000 more Cambodian children would die each year, mostly of infectious diseases. "These children are at the mercy of donors," says the doctor, who holds twice-weekly cello concerts in a theatre attached to the hospital to elicit donations from the relatively well-heeled tourists who flock to Angkor. "Money or blood," he demands of the old and young respectively, many of whom respond positively. In the past year tourists gave 2.2 million dollars and on average, about 300 per month give blood, 30 percent of requirements.

There are currently 800 beds at the hospitals, but with 1,100 patients some have to sleep on the floor. Extensions to Jayavarman VII and Kantha Bopha I in Phnom Penh will raise the number of beds to 1,400 when complete.

Richner was working as a doctor in the kingdom in 1975 when the genocidal Khmer Rouge seized power. He was invited back in 1991 by then-King Norodom Sihanouk to rebuild Phnom Penh's Kantha Bopha I hospital. For years he has been critical of the corruption and small salaries paid to health workers, refusing to work directly with the ministry of health and also arguing that the UN's grassroots approach will not work while salaries are low. Richner, who was named Swiss of the Year 2002, concedes that primary health care work is needed. "Of course it's important, but you must create facilities and the facilities must have people who are working. These health centres do not work because there are no people inside, because they have no salaries," he says.

Prime Minister Hun Sen, who has declared a war on the rampant corruption right across government and described the hospitals as models for the country, will this year hand the doctor 1.6 million dollars, bypassing the ministry. "Without our system, he knows 60,000 children will die. So he knows about this corruption and that's why he gives directly to us," Richner says.

The government gave 300,000 dollars a year for two years prior to that. "My worry now is still the money. This is not sustainable." Richner will head to New York soon, hoping that his cello-playing and intensive public relations will raise enough to cover running costs for the next decade. "Then I hope that the economic situation in Cambodia will be better and then all these hospitals can have this level that we have."