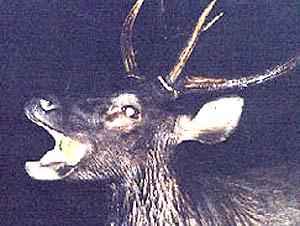 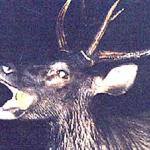 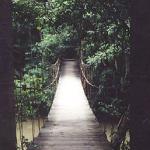 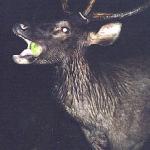 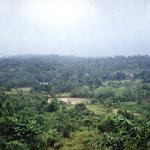 If you can travel to Thailand's Khao Yai National Park with a British ecologist, do so. The ecologist's love for nature and the Britisher's love for minutiae will rub off on you, and you will learn more than you ever could from a book.

I was lucky enough to have the British ecologist, but unlucky to possess the notorious, buzz-saw-like American mind, which abhors minutiae. Thus I was not aware, until our group stood amidst Khao Yai's 2168 square kilometers of jungle, that this jungle during the rainy season is crawling with toothpick-size leeches, whose very existence depends upon the blood of bulky, slow-witted mammals like me.

Founded in 1962, Khao Yai is Thailand's oldest and most famous national park, although it is only the nation's third largest. Its fame derives in part from its proximity to Bangkok, a mere three hours away. But the fame also derives from the park's enormous diversity. It is reported to contain over 300 species of birds and 70 species of mammals. Among its fauna are hornbills, barbets, pig-tailed macaques, sambar deer, civets, and the only wild Asian elephants remaining in Thailand. The park is also remarkable in its being over 80% forested - this in a nation suffering from catastrophic deforestation. The climate is monsoonal: 2.27 meters of rain falls every year, an astounding 84% of which falls during the rainy season, spanning the months June to October. The rains fall sporadically; only when they haven't fallen for some time is the jungle more or less leech-free.

Sold at the park headquarters are "leech socks", finely-woven cotton socks about the size of large Christmas stockings, which prevent the leeches from biting into skin with their three teeth. Park workers wear the socks as a matter of course, as normal socks are of too loose a weave.

Some in our group opted to wear leech socks, others not. But everyone walked the trail with great vigilance. A leech can stand upright after a fashion, and cast about its head for potential hosts, so it is fairly easy to unwittingly snatch them up onto one's shoes or bare feet. When they bite, they administer a local anesthetic, so they are seldom noticed unless seen. They are also prone to falling from the canopy above, so leech socks do not provide total protection. A Thai man staying at the park offered us a very dubious anti-leech potion contained in an old whisky bottle, but we did not use it. It looked enough like whisky that we had to remove the bottle's label, lest someone mistake it for liquor.

Most in our group managed to get through the trail with only one unobserved leech, on a heel or a big toe. One hapless Thai girl, however, was horrified to discover two leeches sucking away on her abdomen. She became nearly hysterical - shucking off clothing, crying - and swore never to return. It sometimes takes an hour for leech wounds to stop oozing blood, as the leeches also administer an anti-coagulant. She had blots of blood on her tummy as a nasty reminder of this offense.

The ecologist explained with the British stiff upper lip that the bites were perfectly harmless. Any kind of exchange of bodily fluids in Southeast Asia is fearful, but he suggested that disease transmission via leeches is highly improbable: when a leech is full, it merely drops off, and will wait some time before seeking a fresh host. He was obviously more at ease than the rest of us, but he had been tried by fire: trekking in the jungles of Borneo, he returned home to discover a leech fattening itself on his scrotum. He said that "leech-bite paranoia", the erroneous feeling that one's skin is crawling, is much worse than the bites themselves.

One of the members of our group decided he was going to overcome his leechphobia, so he permitted two leeches to suck away on his fingers. One leech became quite fat before he scraped them both off with a knife and exploded them with a chunk of rock.

I had my own rather unpleasant interaction with these parasites on a later trek. All of a sudden I felt like there was something flopping about in my shoe, so I removed it and discovered a fat leech on the shoe's bottom. It had fed in the space between two of my toes. They were now bloody, and kept bleeding until my shoe was stained.

Fortunately, leeches were not the only form of wildlife we observed at close quarters. One morning at the Bahn Tiew Tat lodge, we saw a barking deer feeding in the adjacent field. It was unperturbed until, seeing us approaching with menacing cameras, it bounded away in its characteristic zigzag, the white underside of its tail flashing.

Late one night at the lodge, I was stirred from my bed by the others. Two sambar deer, one buck and one doe, had walked right up to the patio. They were exceedingly tame: we fed them fruit and vegetables from our hands - tomatoes, cucumbers, even a softball-sized rubbery-shelled guava. They were not even bothered by camera flashes. However, they did get a little jumpy whenever anyone stood between them.

Eventually, the antlered buck lumbered over to a pile of pots and pans, which had been used in the party of the previous tenant, former Prime Minister Anand Panyalachoon. The pots still contained rice soup and curries. Someone took the lid off the pot containing the soup. The male gorged on it, turning slowly toward us, his snout slathered with rice.

Near the park headquarters are a number of general stores and food stalls, the only place to get provisions without leaving the park and going to nearby Pak Chong. Having lunch there one day, we saw another sambar doe wander out from behind the stalls. It too was unfazed by the people milling about, and vanished as quietly as it had come.

Only the ecologist was able to wake up early enough to see the hornbills - the huge, long-beaked birds beloved by ornithologists. He confirmed what I had read about the prodigiously loud beating of their wings during flight, that it sounded like the first labored chugs of a locomotive.

We also spotted a number of pig-tailed macaques. They are, says the ecologist, the only macaques that come out of the trees. These macaques hung out by the side of the road into the park, and they ran fearlessly up to our minivan as it passed.

Two animals were, regrettably, unseen: the Asian elephant and the normally ubiquitous tookay. Sadly, elephants are rarely seen in Thailand in their natural condition. The tookay, on the other hand, is found in almost any Thai home. Yet one of our group had been in Thailand for weeks, and had not yet seen one or heard its call.

Thailand is one of the most biologically diverse countries in the world, but one would not see this on its more well-trodden paths. It is not a little disconcerting travelling from Bangkok, a city representative of the infernal havoc a few humans can wreak on their environment, to Khao Yai, where nature holds sway. Inevitably, the return to Bangkok's stench, filth, obnoxious traffic jams, and its apparent domination by a few species - people, stray dogs, cockroaches - does not inspire optimism regarding the longevity of places like Khao Yai.