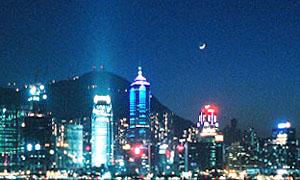 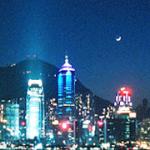 One day, I'm staying in a grimy $9-a-night Beijing dorm room where I'm afraid to touch anything for fear of germs. The next night, I find myself in a suite on the 27th floor of The Peninsula, Hong Kong's ritziest hotel. My trip to China is getting very strange indeed.

I'm not staying at the fancy hotel, of course. I don't have nearly enough money. I'm only there for a birthday party. Instead, I'm staying at the much cheaper Ramada Inn in Kowloon. It's not the greatest hotel, but the clean, rust-free shower in my room seems immaculate after my Beijing experience.

The party is not until later, and I have a few hours to kill before meeting my friend Linda, so I wander around Kowloon. Layers of neon signs are above each street, and there are so many little stores everywhere. Restaurants, video stores, camera shops, magazine stands, clothing outlets - they all blend together after a short time, as one's brain overloads from all the opportunities to spend money.

Meanwhile, tailors are on every street corner, trying to sell me a suit. As the temperature's well over ninety, wearing a suit is the last thing I want to think about, but they stop everyone. Walk into a camera shop, and the salespeople there are just as persistent. My guidebook warns that these are notorious rip-off joints, but I still want to buy something. Everything is just so shiny.

After a short rest in my hotel and a few minutes of television - during which a Chinese channel shows the Budweiser "Wassup!" commercial complete with Chinese subtitles - I meet Linda. We have a nice reunion over dinner, and then we're off to The Peninsula for the birthday party of her friend Carol.

Linda thinks it will be a nice introduction to the city, and she's right. For one thing, the hotel's location right on the tip of Kowloon is perfect. With all the Hong Kong skyscrapers lighting up the night, the view from the suite is amazing. Of course, there's one minor problem. I most certainly don't fit in. Even if I weren't the only white person in the room, I still would stand out for being the least stylish one there. Except for me in my well-traveled Khakis, this is a roomful of wealthy people with style.

It turns out to be a special party. Just shortly before we arrive, Carol, the birthday girl, is proposed to by her boyfriend. He proposes by getting down on his knees in front of Carol and her 30 closest friends. Gee, no pressure there.

The interesting thing is that no one seems to know whether she actually said yes. They have only been dating for a year, so everyone seems a bit surprised by the engagement. Later, during a speech thanking everyone, Carol makes a joke about not officially accepting the proposal yet, and nobody quite knows whether it's really a joke or not. All I know is that the unofficial fiancé looks more than a little uncomfortable.

He's not the only one uncomfortable. I start talking with one of Linda's friends who takes great delight in pointing out all the people there annoyed by the engagement. He shows me all the women who look jealous and all the men in long-term relationships who look nervous. As he tells me, he even gives me a little background on each couple. The pure schadenfreude of the moment is just exhilarating.

Towards the end of the party, the birthday girl opens her presents, but this isn't any ordinary present opening - and not just because most of the presents are so expensive. After methodically opening each present, Carol asks the gift-giver to come to the front, while her boyfriend and/or not fiancé takes a picture of the two with the gift displayed prominently. This goes on for about twenty minutes, as everyone who brought a gift must be photographed. It seems a horrible tradition. Imagine bringing a tacky gift to this party and forever having your complete lack of taste documented on film.

For some reason, I do end up in a few photographs, which means that, years from now when the happy couple looks back on this night, there will be a giant chorus of: "who the hell is the redhead?"

Of course, it's equally possible that they will never even get married, and the negatives will be burned. Well, that's what I'm banking on.