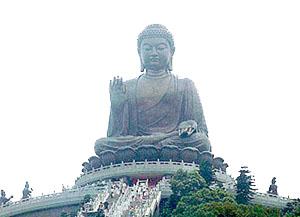 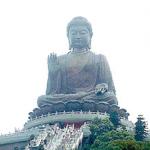 I love the constant crowds of Hong Kong. I love the shopping and the nightlife, but sometimes enough is enough. There's only so much excitement one can take, and so, after a week in the city, I decide to visit the Big Buddha at the Po Lin Monastery on sleepy Lantau Island.

Lantau is just to the west of Hong Kong Island. The airport is on the north side, but the rest of the island is mostly desolate. Getting to the monastery can be easy -- simply get off the subway near the airport and take a short bus ride. However, I opt for a more circuitous route, one that involves almost three hours of trains, boats, and buses. It's a good thing too, because in many ways the journey there is just as interesting as the destination.

I take a short subway ride to Central and then take an hour ferry ride to Mui Wo on the southwest corner of Lantau. Aside from a McDonald's there that feels totally out of place, Mui Wo seems to be a quaint little seaside village. I only wish I had some time to walk around, but I must catch a bus moments after my arrival in order to get to the monastery on the other side of the island.

The bus ride to Po Lin is the strangest part of the day. We spend 45 minutes on narrow one-lane roads, slowly climbing hills. The views are wonderful, even if clouds are starting to move in. At times, the hills are so steep that the bus can barely move. If you listen closely, you can almost hear "I think I can ... I think I can..." in the background as our bus struggles to reach five miles an hour. Only occasionally are there spots in which to let the traffic pass. Then, our bus driver will pull to the side, while the descending cars go by. After spending so much time in the city, the sheer civility of it all -- the hand waves between drivers, the smiles, the friendly honks -- is surreal.

And then I reach the monastery and see the Buddha dominating the hill. It's quite a sight. It may not be the biggest in the world; according to my guidebook, there are other larger ones. This one is merely the "world's largest, seated, outdoor, bronze Buddha." There are many stipulations in that statement, but the statue is impressive nonetheless. At 85 feet and over 200 tons, it's definitely one big Buddha.

While it's still sunny below, clouds are slowly rolling in, obscuring parts of the Buddha's head. As I walk up the stairs to the top, it looks like a storm is on the way, and a nasty fog is developing. By the time I get to the top, I can see nothing when I look down. It doesn't matter. The fog serves only to make the Buddha seem all the more mystical. There's a temple inside him, and the other tourists and I walk through it in a quiet daze. Indeed, the fog seems to have gotten to us all.

I later visit the monastery down below. I'm told that it's normally mobbed with tourists on the weekend, but it isn't very crowded at all on this Monday. Weekdays are definitely the best time to visit. I walk through a beautiful temple, but by now, I'm starving, and I'm thinking only of lunch. I feel more than a little guilty when I hear my stomach growl in such a holy place.

Hong Kong has an unfortunate tendency to disrupt any beautiful spot with some mall (think Victoria's Peak), but thankfully, the serenity here isn't tarnished at all by a mall. Luckily, there isn't even a McDonald's. Instead, there is only a vegetarian restaurant designed to let you eat exactly the way the Buddhist monks eat. A meal ticket costs about US$8, and there's no worry about deciding what to order. In fact, there are no menus at all, and little in the way of service.

The monks give everyone in the restaurant the same thing -- some tea, a plate of spring rolls, and two mixed vegetable dishes. The dishes are tasty but laden with oil. I bite into one mushroom and taste nothing but the oil. In fact, it may well be the most unhealthy vegetarian meal I have ever had, but it doesn't matter. One comes here for the tranquility, not the food.

If you don't like the food, tough. That's just part of being a monk.