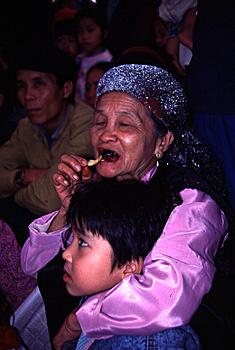 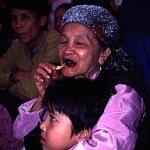 On my early visits to Vietnam, I was quickly impressed by the spontaneous warm smiles of the Vietnamese children. On later visits the more reticent but sincere smiles of many older northern Vietnamese became even more memorable. Their smiles revealed jet-black teeth.

Tooth blackening was (and still is) a deliberate process but it was not uncommon for tour guides (even Vietnamese guides) to tell visitors that the black teeth of the older Vietnamese women were the unexpected result from the habit of chewing betel.

A betel chew is made up of several ingredients: betel leaf, slivers of areca palm nut and a bit of lime paste. The pieces of nut covered with lime paste are wrapped in a leaf of the betel pepper vine, making a tiny package that fits neatly into the pouch of the cheek. The quid, as the entire package is called, releases a mild stimulant and anesthetic that relieves toothaches while suppressing the appetite. Betel chewing is still a common custom throughout Southeast Asia and has the same geographic distribution as the custom of filing and blackening the teeth. Indeed chewing betel does affect the coloring of the teeth but it conveys an irregular brown color instead of the lustrous black seen in Vietnamese who have had their teeth lacquered..

Mrs. Nguyen Thi Pham, a 67 year old Hanoian, dressed in a loose silk overblouse, black satin trousers, jade bracelet and necklace, described the ritual blackening of her teeth when she was 17. Pham waves her slender gold-ringed fingers as she described the party-like atmosphere of the ceremony. Her grandmother blackened her teeth as the rest of her family looked on joking and making joyful comments to her as her mouth was being "painted." There needed to be three applications (every other day for a week) because natural saliva washed off the original application of chemicals. For that period of time she could not eat solids and could drink only through a straw. The ritual certified that she was "grown up and ready for marriage." Although it was not a painful process for Pham, I have spoken to other women who recall that their mouths swelled up or that their gums burned and stung for days. The procedure could take place some time after the age of ten when the child has all her permanent teeth but is usually done after menarche.

Professor Vu Van Chuyen of the Center for Research and Development of Medicinal Plants helped me understand the chemistry of tooth blackening. The chemical ingredients can take several forms. In Vietnam red sticklac, a resin obtained from secretions of a tiny aphid-like insect that sucks the sap of a host tree, was used as a dye. This was diluted with lemon juice or rice alcohol, stored in the dark for a few days and then is applied with pressure to all the teeth. This will then react with an application of iron (mainly from iron nails) or copper from green or black alum and tannin from Chinese gall to give a blue-black color and an insoluble coating. In some areas of Southeast Asia, coconut husk is burned to form a black sticky char that is combined with nail filings and adhered to the tooth surface until the dye "takes." I noticed that the Vietnamese use the term 'dye' and not 'lacquer' to describe the process, although in English it is common for anthropologists to describe "lacquered teeth." In Japan the mixture was made by soaking iron filings in an infusion of tea or sake to produce a liquid that turned a permanent black upon the oxidation of the iron. Sometimes cinnamon bark, cloves and anise were added to reduce the harsh chemical taste of the dye paste. Betel chewing maintains the dark color and some people reinforce the dark luster by a periodic reapplication of the dye.

There were cultural reasons for tooth blackening. It was believed that only savages, wild animals and the demons of the underworld had long white teeth. In part, the original rationale for the filing and blackening of the teeth at puberty was the assurance that one would not be mistaken for an evil spirit. Statues seen in Vietnamese temples sometimes depict a mandarin holding a small flat rectangular object in front of his mouth. This board was to be used when he spoke to the King so as not to expose his teeth to His Majesty. Even today in Hanoi, my more traditional friends will hold a hand in front of their mouth when speaking. Girls are taught that is sweet and polite to smile but not ladylike to laugh. These traditions may relate to the superstition that exposing the uncouth "fangs" is uncivilized savagery.

For similar reasons, throughout Indonesia and Philippines, teeth were sometimes filed down at puberty. Some filing rituals were symbolic, such as the minimum trimming of the two front teeth. Other regional protocols, as in Sumatra, demanded a drastic trimming of all the teeth. The filing of the teeth was practiced also among the hill tribes of the central highlands of Vietnam. Blackening of the teeth was popular both on the mainland and insular Southeast Asia.

In 1938 a French survey found 80% of the countryside folk of Vietnam had blackened teeth. Medieval kings of Vietnam and other Southeast Asian countries blackened their teeth and wore tattoos. This clearly distinguished them from the Han Chinese occupiers who did not practice such customs. When the French came to Vietnam, they did not appreciate the implied beauty and the procedure was discouraged. For many years I did not see any woman under the age of 60 with her teeth blackened. However, recently I was surprised to see a young woman in her twenties living outside of Hanoi who had black teeth. She was a novice nun living and working in a Buddhist temple. I could not resist asking her about it. She smiled in surprise at my question and answered that it was another form of renunciation of worldly concerns and vanities like her simple brown garb and shaved head.

*Vietnam Cultural Window magazine published in Hanoi has a recent article on the difference between the Japanese and Vietnamese methods. Volume 6 & 7, pages 38-39, September/October 1998.

The Exotic Sounds of Ca Tru