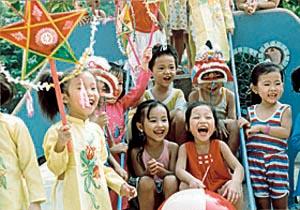 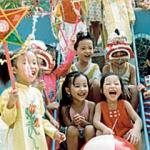 Mid-Autumn Children's Festival or Tet Trung Thu is a wonderful time to visit Vietnam. The festivities last for several days and there is singing and shouting. Children wear masks, parade happily in the streets and bang their drums. Parents buy lanterns and toys for their children and prepare their favorite dishes. Special cakes are made and exchanged, and fruits are plentiful.

The festival is celebrated on the fifteenth day of the eighth lunar month, the day of the first full moon closest to the autumn equinox when the moon is at its fullest. The autumn equinox always falls on September 23. This year, the Children's Festival will occur on October 8. At the spring and autumn equinoxes the duration of day and night is equal and the sun appears directly overhead at noon at the equator. After September 23 the days become shorter and the nights grow longer.

During the Children's Mid-Autumn Festival, although the moon is then at its greatest distance from the earth, it appears larger than at any time of the year and takes on a reddish glow. In the West, this large, full autumn moon is called a harvest moon. In its partial phases, the moon represents the incompleteness of life and potential for completeness, fullness and prosperity. The Mid-Autumn celebration is then a celebration and a prayer for the fullness and completeness of life.

In many ancient agricultural cultures, when the nights got longer and the light and heat from the sun decreased, there were prayers and ceremonies urging the sun not to forget to rise again the next year. The theme of light after darkness is a key to understanding fall festivals. In ancient times in northern Europe farmers held a great festival with bonfires and they rolled firewheels down hills to recall the descent of the sun and then to invoke its ascent and return. The lanterns which Vietnamese children play with on this festival day recall the wish for the return of the sun's warmth and light. There are several different shapes of lanterns including the five-star lantern representing the sun and the frog-shape representing the moon. There are lanterns which spin around when a candle is placed inside, symbolizing the seasonal spinning of the earth around the sun.

During the festival, children wear paper-mache masks of Ra Hu who looks somewhat like a tiger. According to the myth, during the creation of the world the gods stirred up the sea to activate the ambrosia of immortality. The demon Ra Hu, lord of the nine planets and ruler of the gods of the nine planets, stole it and the sun god punished him by cutting off his head. The myth also says that Ra Hu ate pieces of the full moon and that is why it has phases and eclipses. Children wear the masks and growl like tigers to frighten Ra Hu so he will not gobble up the entire moon. Nowadays there are also many kinds of plastic masks, including Mickey Mouse and Superman, to frighten off the monster.

The masks, lanterns, toys, decorations and drums are sold on Hang Ma Street in the commercial quarter of Hanoi. Days before the fifteenth of the month the street is crowded with children and their parents. In the evening, pagodas and temples, especially those temples dedicated to goddesses, are open for worshippers to light incense and make offerings of flowers and fruit and to pray.

Several types of special cakes called banh trung thu are eaten at the festival time and are sold all over town. Some cakes take on the shape of a carp. In Vietnamese tradition the carp represents the soul of the moon. Other cakes are round and white and still others are square and golden brown. The brown ones represent the yang elements, or the sun, and the white ones are the moon. Most of the children don't know the symbolism but just enjoy the taste. We see a yin and yang aspect to many of Vietnam's seasonal festivals. In the balance of the female and male elements of the universe, the fall festival represents the ascendancy of the female powers over the male, the prominence of the moon over the sun's influence.

Banh trung thu are not raised like Western cakes. They are filled with lotus seeds, orange peel, ground beans, and sometimes egg and pork fat for flavor. It is traditional that one offers a box of these special cakes to someone that you want to please or owe a favor, like your landlord or the local police. In addition to cakes, fruits are plentiful during this time, especially watermelon and grapefruit. Grapefruit sections can be transformed into animal shapes like the rabbit of the moon, who according to legend pounds the ambrosia of immortality at the foot of a cassia tree. In addition to the rabbit, there are other mythical inhabitants of the moon. One is the three-legged toad, an incarnation of the moon maiden who stole the elixir of immortality from her husband. And the old man who, as a punishment for displeasing a revengeful god, is forever cutting down cinnamon trees which regrow as soon as his ax chops them.

The meaning of the Mid-Autumn Festival has been transformed over time. Originally it was not specifically for children. The Vietnamese people believe that only when one is innocent and pure can they get close to the natural and sacred world. So by becoming like children, they can acquire attributes of the gods. Because of its interesting legends and customs, and because the weather is mild, the Mid-Autumn Festival is a special time to see Vietnam.