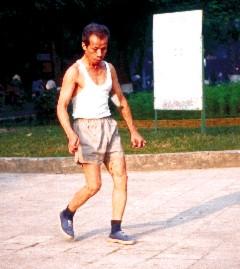 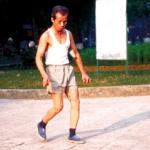 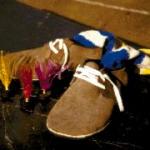 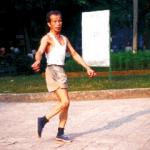 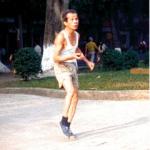 A game of shuttlecock requires little special equipment. A birdie and a ready foot are all that is needed to play the most popular street game in Hanoi and Vietnam's national sport.

Although it can be played anywhere, by one person or a group, the favorite venue in Hanoi is on Hoan Kiem Lake at the intersection of Le Thai To and Hang Trong Streets. Every morning at dawn the pavement in front of the cultural center, the Khai Thi Kinh Duc, becomes a playing field. Nets are set up and experts compete for several hours before heading off to their day jobs.

Nguyen Van Nguyen, director of the Hoan Kiem Center for Sports and Physical Culture, has been coaching shuttlecock for eight years. A former television repairman, he has the appearance and attitude of a 40-year-old though he claims to be 60. Shuttlecock is his passion. He has even invented special suede shoes that convert the foot into a veritable paddle. According to Nguyen, shuttlecock "is a game of great mental concentration." He says educators have discovered that students who are slow in mathematics show a marked improvement after they have taken up the game. Consequently, the Ministry of Education has brought the sport into the school yards.

The game, called da cau, involves kicking back and forth a small birdie, a cau, similar to a badminton bird. The shuttlecocks were made of metal coins and feathers in the old days. Now they are fashioned out of rubber and plastic. The feathers are colored cellophane ribbons. The bright fringe allows players to see the birdie more clearly and indicates the bird's potential speed.

Games like shuttlecock have a long history. Bone and tortoise shell items from China's Shang Dynasty depict people kicking balls. In Vietnam, historic annals mention kickball tournaments as far back as the 11th century. Wood carvings of shuttlecock players have been found on the 17th century Vietnamese temples.

The Southeast Asian form of kickball is known as takraw and is first described by the Malaysians. It was played with a hollow rattan or basket-work ball. An individual or a group of players in a circle would keep the ball in the air by kicking it with a foot or knee and preferably with the insole. In Southern Vietnam the rattan ball was replaced by a shuttlecock made from a leather ball wrapped with string and weighted with three long feathers. In Sumatra and Java, the feathered shuttlecocks were made by sticking chicken feathers into a small bamboo stick.

Shuttlecock was neglected in Vietnam during the 1950s, '60s and '70s. After 1975 a well-known Hanoi pediatrician Dr. Nguyen Khac Vien campaigned to revive the sport. Recognizing games as a universal need, especially among children, he organized teams of players and facilitated the production of inexpensive shuttlecocks.