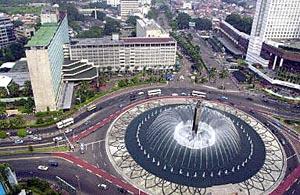 The Hotel Indonesia (L) in Jakarta, made famous by Christopher Koch's novel 'The Year of Living Danderously' and the movie of the same name. 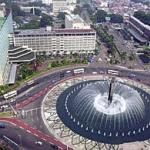 JAKARTA, April 18, 2004 - The Hotel Indonesia and Ujang Ursin have aged together.

He was a young man from the countryside when he first began work in the gardens of the sparkling new 15-storey building that rose out of the surrounding fields in 1962.

"I was startled ... amazed," Ursin said, smiling at the memory.

Now he is a wrinkled 67 years old. Some of his teeth are missing, and the hotel where he will work for a few more days is worn and faded.

On April 30 Ursin and Hotel Indonesia will part ways when it closes for a lengthy renovation and the Hotel Indonesia name, made famous by Christopher Koch's novel "The Year of Living Dangerously" and the movie of the same name, will disappear. The 1982 Peter Weir film starred Mel Gibson.

When it reopens after about two years the hotel will be tentatively named Grand Indonesia, said Rizal Shahab of Mediacomm, public relations consultant for the project being undertaken by Indonesia's third-largest tobacco company, Djarum, through a subsidiary.

Shahab says the renovation will not alter the state-owned landmark's original structure. It was Indonesia's first international-standard hotel and built under the personal supervision of the country's charismatic first president, Sukarno.

"Anything to do with the historical character of the hotel is not going to be changed," Shahab said. "Because that's going to be the selling point."

"I am extremely pessimistic the history will be protected," said Arif Budiman, the hotel's bell captain.

Shahab said rooms will be renovated to make them competitive with those in neighbouring luxury hotels. Hotel Indonesia's adjacent sister establishment, Hotel Inna Wisata, will become a shopping mall and office complex linked to the refurbished hotel, he said.

Budiman worries that the private investors will put a priority on making money rather than preserving what in many ways resembles a museum, where little seems to have changed since the time when Sukarno angrily denounced the West and, as Koch wrote, "considered an international hotel necessary to the nation's prestige."

The Hotel Indonesia name glows every night in red neon above the lobby. The louvred facade allows refreshing breezes to blow along the room corridors. Murals adorn the walls and sculptures of naked women -- Sukarno was known as a womanizer -- decorate the poolside gardens.

A series of photographs in the hotel lobby depict its early history and construction that began in 1959. One shows Sukarno, with a pith helmet on his head and swagger stick in hand, inspecting the site. US Senator Robert F. Kennedy also visited, according to another photo.

Ambassadors and senior government officials attended the opening on August 5, 1962.

"There were so many foreigners," he said, taking a break from tending an artificial garden outside the Yamazato Japanese restaurant, closed since April 1.

History has not been kind to the hotel which lost three billion rupiah (348 thousand dollars) last year and, although it carries five stars, lacks the glitz of its neighbours.

Few foreigners now stay at the Hotel Indonesia, whose room rates have dropped to Rp 195,000, far below its competitors.

"Before, they went for as much as Rp one million," Saad said.

At a recent meeting in the hotel, politicians fanned themselves as the aging air conditioning system struggled. A piece of ceiling had come loose above them.

The lobby doormat is filthy. The carpets are stained.

"We are proud of this hotel but it's too bad it's not functional right now," Shahab said.

Hotel Indonesia and the Inna Wisata employ about 1,300 people. They will receive a settlement package and can re-apply when the hotel opens again, Shahab said.

Employees say there are no guarantees they will get their jobs back.

"I used to pass by and imagine when I could work," said one man who joined Hotel Indonesia as a cleaner 27 years ago and will leave as chief cashier. "There was a certain pride."