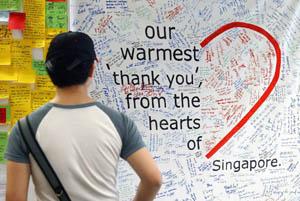 A man reads messages by Singaporeans' thanking health-care workers caring for SARS patients. Over 1,200 handwritten messages of gratitute and encouragement were displayed in this subway station. 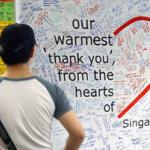 SARS. A word that spells fear and sends masks flying off pharmacy shelves. SARS, short for Severe Acute Respiratory Syndrome, has become a s*T*ar overnight. The world's medical professionals and laboratory researchers are in a race to understand how SARS spreads and to find a cure for what seemed initially to be acute pneumonia. The main signs and symptoms of SARS include high fever (more than 38 degrees C), dry cough, shortness of breath or breathing difficulties.

The first strains of the mysterious killer virus came out from Guangzhou (China) and Hanoi (Vietnam). It has now spread far and wide to over 30 countries in the world including Canada, China, Taiwan, Germany, Hong Kong, Singapore, Thailand, Europe, the United States, Malaysia, and the Philippines. If control measures are laxed in any one place, many more countries will be affected as SARS carriers traverse borders. Hong Kong has recently discovered that that there are relapsed cases and that SARS patients can harbour the virus for at least a month after being discharged.

On 13 March 2003 Singapore woke to its first three SARS cases. These were people who had recently returned from Hong Kong. Since then the government has proactively set up stringent measures to contain the rapidly mutating virus from entering and leaving Singapore. For its efforts, Singapore was praised by WHO's communicable diseases chief David Heymann. "We're very pleased with the efforts that are being made, and I believe that we are confident that the epidemic has peaked and that it's on its way down," Mr Heymann was quoted in the local Straits Times on 1 May 2003.

Truly the Singapore government has roped in the nation to fight SARS. Tan Tock Seng Hospital (TTSH) was designated as SARS Central - the hospital where SARS suspects and patients are isolated. Schools were closed for 10 days in late March. A large wholesale fruit and vegetable market was also closed in late April after a cluster of three cases were discovered there. Military men are helping to trace and to follow-up probable SARS contacts. Thermometers and daily temperature readings have become a way of life with many people in Singapore.

Bad news as the tight-fisted government measures sound, Singapore has not become a nation of masked people. On the contrary, very few people on the streets wear masks. As precautionary measures some companies have contingency plans to separate colleagues into various teams and to work out from different locations within the island but there is no show of fear or paranoia as Singapore goes about her daily business.

Travellers who are thinking of giving Singapore a miss might change their mind if they know what Singapore has done, and is doing, to fight SARS.

At Changi International Airport and Singapore's seaport, all departing and arriving passengers are subject to temperature checks. Thermal scanners are being used at security checkpoints to detect abnormally high temperatures in arriving and departing passengers. Suspect cases are wheeled off to TTSH for further observation and treatment.

Taxi and bus drivers take regular temperature checks and public transport display stickers to indicate that the drivers do not have fever.

Over 55,000 stallholders and their assistants in public wet markets and cooked food centres were given personal digital thermometers to check their own temperature twice daily. Ministry of Environment officers conduct spot checks and those who fail to comply stand to lose their business license temporarily.

Following this lead, privately run market produce shops and privately operated wet markets are also encouraged to do their own temperature checks.

These have set up "fever stations" outside their premises to deal with patients running a temperature.

The Ministry of Health has also implemented at "no-visitor" rule in hospitals to reduce the chances of visitors being infected and to prevent the spread of infection to others. Exceptions are made for pediatric wards and those in obstetric care. The no-visitor rule would be reviewed at the end of May.

Schools were scrubbed clean with disinfectant during the period of closure in late March. Digital thermometers and log books are given to all students to monitor their own temperature. Teachers are tasked with monitoring the health of students and they stay in constant contact with parents and guardians to ensure that students have not come in contact with a probable SARS suspect or patient.

The government has instituted stringent control measures including a 10-day quarantine for anyone who comes in contact with a probable SARS patient. To ensure that quarantine orders are taken seriously, web cams are installed in the homes of the quarantined and health and police officers make daily and regular contact.

Recovered SARS patients are placed under home quarantine for 14 days and their health is monitored daily. When the quarantine is over, they have to return to TTSH for a medical check-up.

The government is adamant that everyone should act responsibly and cooperatively. As public education, more than 1.2 million booklets of "Fighting SARS Together" have been printed in the four major languages - English, Chinese, Malay and Tamil. The booklet, to be distributed to every home, tells people how to protect themselves and others from infection. On the drawing board is a plan to supply each household with a thermometer.

National servicemen are required to take their temperatures twice daily to ensure the army is SARS-free while maintaining its operational readiness to defend Singapore.

Having weathered the initial fear, life goes on in Singapore. Shopping malls and eateries are beginning to see the crowd return and Singaporeans, in an effort to lighten, are circulating SARS jokes via mobile SMS and emails.

The fight is far from over. The SARS ministerial combat unit is now set to deal with other frontliners such as general practitioners, Chinese sinsehs, dialysis centers and pharmacies, spas and massage parlours - sources of probable SARS outbreak.

As at May 3, 2003 the situation in Singapore is that 146 patients have recovered from SARS. 31 patients remained hospitalized, of whom 15 are in intensive care. The number of people who have succumbed to the disease is 24 and three of the dead are healthcare professionals.

For updates on the SARS situation in Singapore, log on to www.sars.gov.sg