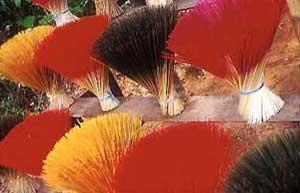 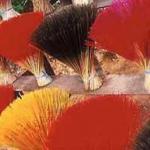 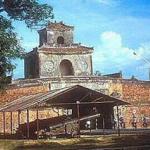 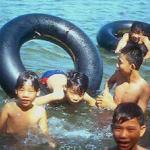 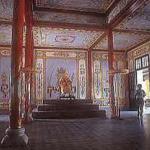 The ghosts of emperors, concubines and eunuchs still people the imperial tombs of Vietnam's cultural capital of Hué.

Tu Duc had everything - and nothing. The nineteenth century Vietnamese emperor was also an accomplished poet and philosopher - yet, by his own reckoning, an abject failure.

Despite the devoted attentions of one hundred and three concubines, Tu Duc could not produce a single heir; some of his predecessors sired dozens. Worse, foreign barbarians were knocking at the empire's gates.

World-weary, he set about directing the construction of a mausoleum in the hills outside his imperial capital of Hué, to be his retreat both in this life and the hereafter. Six thousand workers toiled through the 1850s and 1860s to build Tu Duc's pleasure palace.

"A really romantic man" says my erudite guide, Tham, of the diminutive despot, barely five-feet tall, whose empress commanded a larger throne than he. Tu Duc's diminutive vestments, made of the finest silk, can now be seen in the magnificent teak-paneled hall which houses the Royal Fine Arts Museum.

Hué in early evening is a city of lanterns, three-wheeled 'cyclos', motor scooters and bicycles meandering two or three abreast down dimly lit, tree-lined streets. Within the brick walls of the Citadel, the old moated city, families gather under flickering neon to watch flickering screens and tuck into their rice bowls.

Sweaty backpackers crowd into cafés operated by deaf-mutes who display their Lonely Planet guidebook entries. We climb five floors of steep stairs to reach the rooftop of Lac Thanh restaurant, where Gordon Geckos (greedy little devils, according to folk tradition) scamper across the mould-stained walls.

Dinner done, I lurch across town on my Chinese shopping bike, one-speed with wobbly seat. Tonight, at least, the bar called Apocalypse Now is empty, gloomy den, its walls chalked with unoriginal graffiti about football teams in Manchester or Milwaukee.

Apocalypse was Now during one of the bloodiest battles of the 1968 Tet Offensive. During the 25 days that the red flag flew over the Citadel, the Viet Cong imposed a reign of absolute terror. Many trembled in their homes, darting out briefly at night to take in supplies.

Another hot, bright morning and it's time to take in some of Hué's cultural treasures. Past the pastel-pink railway station a red earth road winds down towards the Tu Hieu Pagoda, built by imperial decree in 1843 to commemorate the filial piety of a monk who risked censure to tend to his invalid mother.

Monastic life at Tu Hieu follows a strict regime which begins at three-thirty in the morning and ends with lights out at ten. The passing hours are allotted to meditation, study and a form of Tai Chi. Now, in late morning, a vegetarian lunch is being served. Novices' heads are progressively shaved, leaving long tufts which recede as the wearer's studies progress.

Vietnam borrowed heavily from the Confucian precepts brought by the invaders from the north, but the traditional culture differs in details from that of China, says Tham. Pass through the ornate gates to these tombs and temples and you enter an unnaturally ordered world; Heaven, earth and Son of Heaven each in its place. Bao Dai, last of the 13 Nguyen emperors, stepped down in 1945 and died in France in 1997.

Tu Duc's fantasyland includes several palaces, the tombs of the potentate himself, his queen and his adopted son - a nephew, poisoned within months - inside twelve hectares of landscaped grounds. Luu Khiem Lake, now crowded with wilting lotus flowers, laps at the foundations of a pavilion where the emperor composed poetry, attended by concubines; five at his rest, thirty whilst he slept. None, however, could disturb the imperial dinner, consumed in solitary splendor.

Between imperial assignations the concubines cavorted in landscaped gardens, gliding between the bonsai. The United States' Seventh Fleet pulverized these groves during the 1968 Tet Offensive hostilities.

Constrained at every turn by convention and conflict, the concubines risked being 'widowed' on the emperor's death and then cloistered in the imperial mausoleum to wait in attendance on his soul. According to one locally-produced guidebook, "A funny story had it that two beautiful ladies had to make love to each other and were caught in the act by eunuchs.This showed us the bitter destinies of the beautiful ladies abandoned in the Royal Palace by the King." Gia Long, founder of the dynasty, exclaimed that it was easier to rule an empire than a harem.

Eunuchs served as trusted attendants to the ladies of the court. Eunuchs led lives of great frustration, trapped too in the pervasive belief that without descendants, their souls would wander through eternity.

At his death Tu Duc's casket was ceremonially carried to his supposed tomb but in reality his body was secretly buried elsewhere. Participants in the faked funeral were beheaded, but even so, grave robbers located and plundered the gold and jewelry which should have accompanied him to the spirit world. Massive stone tablets bear the epitaph Tu Duc composed to bear his admissions of failure.

No longer do the imperial dragon boats set sail up the Perfume River, gliding towards the setting sun to visit the imperial tombs. The floating palace would be towed by six or eight other vessels, each crewed by 50 to 60 men.

Now as we board a simple sampan, the boatman's baby sleeps in a bamboo cradle and its mother laboriously unwraps a selection of crude bronze figurines she offers for sale. On the riverbank Dong Ba market is a moving wave of conical hats whose wearers are yoked into heavily laden panniers.

At the Noontime Gate of the Great Enclosure the midday heat is enough to prostrate you before the spirits of the departed emperors who commanded the building of these temples, theatres and palaces in the early nineteenth century. Vietnamese women sheathed in shimmering ao dais gather around the Nine Dynastic Urns.

A Vietnamese-American family from Pennsylvania becomes courtiers for a day, donning gorgeous shimmering silks for the camera. Much of the Forbidden Purple City, once the inner sanctum, is a grassy expanse laid waste by war.

By late afternoon, impromptu soccer games have sprung up on the grassy expanses just inside the city walls, facing the southern and eastern gates. Bia Hoi Ha Noi translates into a very welcome plastic jug of soapy draught beer, served up in a cement courtyard to the saccharine strains of the Eagles' Hotel California. Snacks on the bar menu include beef heart, snail and squid.