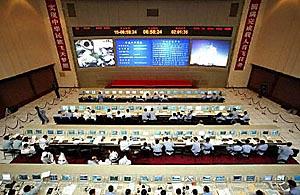 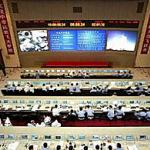 Under a giant portrait of Mao Zedong emblazoned with the words "We, too, must have a man-made satellite", the heart of China's space program -- an entire city built for the sole purpose of reaching the cosmos -- spreads out along its perch at the edge of the Gobi desert.

In a rare visit organized by the authorities, foreign journalists were allowed a peek into life at Jiuquan, China's Cape Canaveral, which shot to world fame last October when it launched astronaut Yang Liwei into orbit. "This is where Yang Liwei took off," said Sun Qingquan, a spokesman for the Jiuquan Satellite Launch Center, standing next to the launch pad that blasted China's first man into space. The mission enabled China to become only the third nation to achieve the feat, after the United States and the former Soviet Union, making the launch an event staff at the center remember with excitement.

"We were pretty nervous, because the technology involved was so massive, but we didn't fear failure, and we won't fear failure next time around," Sun said. Jiuquan is where China is expected to launch its second manned spacecraft, Shenzhou VI, on a five-day mission in the second half of next year.

The center of China's secretive space program, Jiuquan is conveniently located in splendid isolation in the country's arid northwest straddling the border of Gansu province and Inner Mongolia region. Hours after the last major oasis town has disappeared in the rear mirror, the satellite center suddenly emerges as a mirage in the middle of brown, featureless terrain. First to come into view is the 105-meter (346-foot) launch tower, Jiuquan's most recognizable feature known to some one billion Chinese who were glued to their television sets during last year's launch.

Connected to the tower by a 1.5-kilometer rail is a 89-meter-tall building designed for check-ups of the Long March series of rockets, the work horses of China's space program. This is the South Launch Site, which has risen from the desert sand in less than a decade to serve China's endeavor to send a man, and perhaps soon also a woman, into space.

As visitors enter the gates, they encounter a futuristic-looking cityscape with orange and pale blue buildings and street names like "Space Road" and "Aeronautics South Avenue" before they are taken to the East Wing Guesthouse where food is served, astronaut-style, on aluminum trays. "It seldom rains, and we've got lots of sun," says engineer Yun Ning, standing with shoes wrapped in plastic in the center's command and control hub. "We've got excellent location."

Well, perhaps not that excellent if you move here with your entire family, as many of the scientists and technicians have done. Unlike Cape Canaveral, there are no beaches within a 2,000-kilometer radius, and to make up for that, planners have been forced to think of other ways to make life tolerable for the 15,000 people living here. "We've got three schools, a movie theater, a post office, a hospital," said Yun. "We've even got a fastfood restaurant serving fried chicken, although I don't fancy it so much."

In short, all the amenities of a moderate-sized town were available for Yang Liwei when he shared an apartment at the center with two other astronauts for the last month before his historic flight. A not-quite queen-sized bed, a TV set and 154 square meters was what Yang had at his disposal until his space suddenly shrunk to a lot less inside the Shenzhou V space capsule. All the facilities that China allows outsiders to look at are at the South Launch Center.

A higher level of secrecy rules at the North Launch Site, which played a key role at the height of the Cold War, and probably continues to do so in China's planning for the strategic challenges of the future. In 1963, only months after the Cuban missile crisis, US intelligence analysts got one more worry added to their list of concerns when they studied satellite images from the North Launch Site. The images showed discoloration of the launch pads, suggesting the site had become operational, and it has never ceased its research and development of ballistic missile technology.

Jiuquan is so secret that even the people formally in charge, the leaders of Gansu province, have little control over what happens, and just as little information. Hao Yuan, assistant governor of Gansu province, told reporters he would have liked to tell them more about the center, if only he knew. "Actually, as assistant governor I envy you very much that you have the opportunity to visit the Jiuquan Satellite Launch Site. Some of the things you'd like to know, I'd like to know too," he said. "Although I have already worked in my position for a year and a half, I have not yet had a chance visit the Jiuquan launch center."