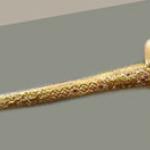 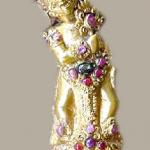 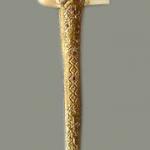 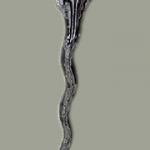 The keris is synonymous with the Malay culture and way of life. The double-edged dagger is unique because it is only found within the Malay Archipelago. The keris is a dagger unique to Southern Thailand (Patani), Malaysia, Indonesia, Southern Philippines (Mindanao), and supposedly in the Cham areas of Cambodia.

In its most basic defination, a keris is a double edged dagger. People with a vague idea of a keris envisage in their mind a wavy blade. But waves do not make a blade a keris. Almost all cultures around the world have swords. What makes the keris one of a kind are the details found at the base of the blade; details that exist in no other swords.

At its best, the keris represents the highest level of Malay creativity. A long time ago, it is used to complete the Malay attire. Walking around without the keris for a Malay men then was akin to walking around naked. Training in the use of the keris - both for combat and ceremony, was handed down from father to son.

The keris was particularly useful for fighting in confined spaces, such as inside a building or in the jungle, where longer weapons would be most cumbersome.

If it was once a weapon, it is now more an object of reverence and respect. Today, it is a status symbol for Malay royalty and dignitaries.

What started out as a weapon has evolved into an object of veneration as the keris is widely believed to be endowed with mystical powers. How would you like to be able to eliminate your enemy by simply thrusting the keris into the enemy's footprints?

Equally intriguing were tales that the keris could transfer the site of a blazing fire simply by pointing the tip of the blade to an alternative site. During the colonial days in Malaysia, people were quoted to have seen fire from a burning shipping vessel transferred to the mainland simply by using the keris.

In traditional houses, a keris would be secured to the main roof beam to protect the house. Stories abound of keris flying out of their sheaths and attacking an enemy; of keris rattling in their sheaths at the approach of danger; of killing an enemy by just pointing at someone.

However, no keris can beat the legendary Taming Sari (named after an Indonesian warrior). Legend has it that whoever is in possession of the keris would attain invulnerability - that was probably why Taming Sari was sought after by two Malay heroes, Hang Tuah and Hang Jebat. Taming Sari was said to have been presented by the King of Majapahit to Sultan Muzaffar Shah after Hang Tuah won a challenge. The Sultan was in Majapahit to ask for Puteri Raden Galoh Kirana's hand in marriage.

"The keris has romance, tales of adventure, nobility and tradition. It is a distinct part of an island world culture. Every keris has a story. It is so commonly encountered, yet we do not know very much about it,"says Kamaruddin Hassan, an avid keris collector.

Another legendary keris that have captured the imagination of many is the Mahsuri Keris. It was said that no other weapon could kill the innocent Mahsuri, who was wrongly accused of committing adultery. It was not until a broken-hearted Mahsuri informed the executors of a magical Keris from her ancestors that they managed to execute her.

Besides such legends, there were frequent tales of the keris rattling in its sheath to warn the owner of potential danger. In Java, it was believed to be disrespectful to unsheath the keris after sunset. Furthermore, only the owner could handle the keris if the ancestral keris was to retain its spiritual power. In such cases, the keris has to be frequently oiled to appease the spirits.

Mythologically, owners of keris are required to conduct special ceremonies to retain the weapon's supernatural powers. They have to wash and "bathe" the keris on the first Javanese lunar year with special offerings consisting of flowers, rice and incense.

Ill-treatment or neglect of the keris may cause the guardian spirit to depart for its home in the spiritual world, leaving the keris powerless.

The keris has also been used for medicinal purposes and Quranic inscriptions are inscribed on the blades. The history of the keris can be traced to sculptures on the walls of Chandi Borobudur in Central Java, from more than 400 years ago. Specimens believed to have been used in meditation were also discovered. Early representation of the keris also appeared in Chandi Shukur around the 14th century. Many believe that the keris may have taken 200 years to evolve into the present form.

The first prototype was developed between the 9th and the 14th centuries. Grouped under stabbing weapons, the keris has been given different names. In Acheh it is known as the rencong whilst in South Sulawesi, it is called the badik. In West Java, it is the kujang.

The history of its origins is shrouded in the mists of time. Sagas and legends surrounding the keris provide an absorbing insight into the culture and customs of the Malay people of the distant past. Today the romance of the keris is forever woven into the fabric of Malaysian history.

Sir Stamford Raffles recorded that the keris was brought to Java from the Malay Peninsula nearly 2000 years ago.

As with everything else, the keris, which is made by specialist craftsmen called empu, has undergone transformation in more recent years. During the glorious Islamic sovereignity, the keris had a special place in the royal courts. It was a symbol of majesty, power and rank. Today it is part of the royal regalia. The keris, which is worn by the King of Malaysia today, is said to be made of iron derived from a combination of the nine ancestral keris from the nine Malay states.

Although the art of making the keris is facing a slow death, its significance to Malay heritage will definitely remain.

Today, keris making is a dying art in Malaysia. Elderly keris-making experts are staying in the smaller towns. A visit to Kampung Ladang Titian in Kuala Terengganu, celebrated as a one-stop keris making centre, makes an interesting diversion. The village has the craftsmen - pandai besi (blacksmith) and sheath and hilt makers - needed to make a keris.

One will see ordinary iron and wood being transformed into an item that is rich with meaning and significance - the keris, a weapon of Malay heritage like lembing and tombak. Not only can you see the masters working at Kampung Ladang Titian, you may even have a chance to purchase the weapon at a relatively cheaper price.

The Craft Complex in Kuala Lumpur have keris and other traditional handicrafts making exhibition from time to time.