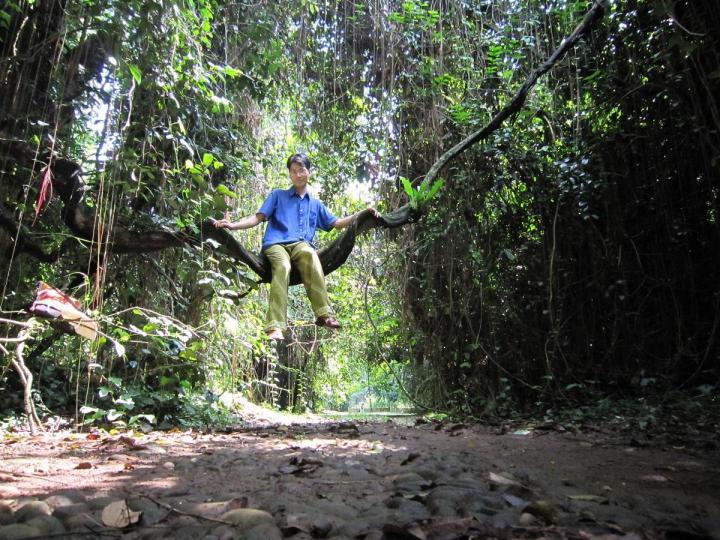 Me sitting on Bauhinia sp. in Kebun Raya Bogor 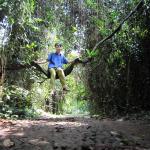 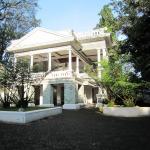 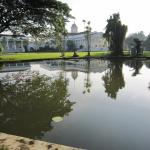 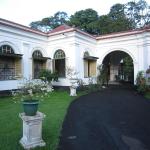 I arrived in Bogor by taxi on a sunny afternoon.  Ruthless traffic of bemos, green angkots, private cars and motorcycles circled the street around the outside of the garden.  School children were running across the busy street.  Vegetable and food sellers occupied the already narrow sidewalk.  This is how I remember Bogor which is only 40 kilometers from Jakarta, a mere 45 minutes drive through the Jagorawi toll road.

Bogor Botanic Garden, one of the oldest botanic gardens in the world, is still able to keep all the hassle and bustle outside its gate.  Established in 1817, this 87 hectares garden provides tranquility to the otherwise noisy town.  On this 3rd visit to the garden, I stayed 5 days to research on the climbing plants collection in the garden.  Arrangement was made through my friend Hans Visser in the Netherlands where vigorous researches were performed in the Malay archipelagos.  I was introduced to Sofie Mursidawati, MSc. Researcher at the Centre for Plant Conservation of Bogor Botanic Garden under Indonesian Institute of Sciences (LIPI).  Sofie arranged to have me stay at the Guesthouse near Treub Laboratory in the garden.  The accommodation was strictly for researchers.  Built in 1900s, it was the residence of former directors of the garden.  The old building has high ceiling with white walls reflecting the heat.  My spacious room, one of the four, has screen windows and old fashion storm windows opened out to the verandas facing the inner courtyard garden.  In the mid-day heat, slightest breeze made the room bearable and I could make notes of the latest survey of plants of the garden at my desk while several cats were lazily sleeping on the couch along the veranda.  The room is generously decorated with a vanity mirror, night tables, a dresser, several cabinets for storage and my comfortable king size bed.  The common area is a large dinning room with several tables where breakfast and tea are served using Chinas from the 1920s.  There are slightly more modern facilities such as fridges and hot water furnaces in the bathrooms, but no television to disrupt the tranquility.  Although the garden went through a lot of changes as new facilities spring up over the years (upgraded nurseries, a new seed museum and a decent gift shop), time seemed to have been arrested at the Guesthouse.

The 1st morning, while exploring the Araceae area (Amorphophallus, Alocasia, Anthurium, Homalomena, Monstera, Philodendron and Xanthosoma), Sofie arranged to give me the current version of An Alphabetical List of Plant Species Cultivated in the Bogor Botanic Gardens 2010.  It lists the 14585 specimens, belonging to 3411 species, 1259 genera and 215 families.  There are 2693 collection numbers that are still unidentified and it excludes native orchids, Nepenthes, Hoya and other glasshouse collections.

Across the red hanging bridge, I walked towards the Climbing Plants Collection passing over the Ciliwung River.  My subject of research is the tropical woody liana called Phytocrene macrophylla, first came to my attention from a botanical drawing in Nathaniel Wallich’s Plantae Asiaticae Rariores.  The illustration shows the curious structure of the spongy woody stem and clusters of long inflorescence of tiny flowers collected in dense fascicles of large flaccid racemes which issue from the lower and tortuous part of the stem.  In 2008, I found 2 female plants bearing pin head-liked single flowers and giant fruits the size of cannonball.  I painted the plant but was unable to locate any plants that have flowers resembling the one in Wallich’s illustration.  After much research, in 2011, this time I did a survey of Phytocrene macrophylla cultivated in the garden and discovered 6 other individuals, totaling a population of 8.

Plant 1 at XV.B. next to no. 154 Stelechocarpus cauliflorus.  A huge female plant, mature with lots of fruits very high in the canopy.

Plant 2 at XV.H. near no. 26 stem forming a loop at ground level and the main stem of the huge female plant strangles a tree, with good size fruits and smaller flowers, located next to the ditch.

Plant 3 at XVI.A. no 156 growing beside Myxopyrum nervosum, this Phytocrene is a male plant with flowers close to the ground near the ditch.

Plant 4 and 5 at XVI.C. near the main avenue of Canarium trees, both female plants with flowers and fruits.

Plant 6 at XVII.C. near no. 208 against a big tree, a male plant with buds ready to flower at ground level.

Plant 7 at XVI. A. climbing a tall tree growing next to the ditch where all foliage drapes down across the stream, sex undetermined.

Plant 8 at XVI.A. near no.75 climbing onto a tall tree, sex undetermined.

The fruits from female plants mature slowly and turn bright orange when ripe.  The cluster of fruits breaks off individually in segments and is quickly visited by ants on the ground.  The skin of the fruit has numerous stinging hairs deterring small mammals.  But the strong rotten smell from the skin attracts ants.  The skin usually rots away quickly in the tropical heat and humidity.  Ants ate the soft and juicy fresh covering the large nut.  Afterwards, ants will continue to bore holes into the hard shell of the nut and consume the inner seed.  I collected a few fighting against the ants and the stinging hairs.

Bogor, being the City of Rain, usually starts raining in the afternoon.  It pours at around 5pm and often continues through the night.  A few nights I walked in complete darkness inside the locked garden for 30 minutes (holding a small flash light and balancing my umbrella), to Café de’Daunan.  But other nights, I survived with cup noodles and tea.  On one particular night, the garden was visited by a strong thunderstorm and pouring rain.  As lightning became more frequent, I toughed it out with a bag of chips and fruit juice as dinner, instead of risking out to the café.

In the morning, it is usually the best time to photograph and sketch the plants as dew is still fresh on the leaves.  I sketched 2 huge unidentified climbers at XVII.C. and at XVIII.B.  They strangle several trees to form a green mass.  The stems are quadrangular and the flowers are small and in subtle green colour.  Colouring the sketch was out of the question as the humidity was too high for any watercolour to dry.

On Monday morning, Sofie brought me to Tujuan Eco Park Cibinong Science Centre LIPI where Herbarium Bogoriense is situated.  The 7.5 hectare area was reclaimed from abandoned farmland.  It is now planted with the overflow trees from Kebun Raya Bogor due to lack of space, arranged according to the 7 eco-regions of Indonesia namely: Sumatra, Java-Bali, Kalimantan, Sulawesi, Maluku, Nusa Tenggara and Papua.  This ex situ conservation area became an expansion of K.R.B. since 2005.

At the Herbarium Bogoriense, I met one of the three botanical illustrators.  He was preparing an illustration of a fern for publication.  I showed my watercolour drawings of Phytocrene and Aristolochia.  Afterwards, I started to examine the herbarium sheets upstairs in the holding area.  A particular specimen from East Kalimantan collected by Ambriansyah in 1996 of Phytocrene macrophylla intrigued me.  The inflorescence in yellowish-green is almost 100cm long with fine brown hair on the outer envelope of individual flower, underleaf and petiole.  It grows in the primary forest, at 6om altitude with a stem of 30m long and 12cm diameter around.

This rare plant is one of the many that are under threat mainly due to the habitat transformation, deforestation, over exploitation and climate change over the last few decades.  K.R.B. makes effort to conserve this diversity of plant.  Sofie succeeded recently, in 2010, to flower a Rafflesia patma in the garden.  The flower was last seen in the Bogor garden in 1914 before the war, and then disappeared since.  By a combination of propagation methods namely: stem and root transplant of Rafflesia infected Tetrastigma vine from a West Java locality to the garden and also inoculation of Rafflesia seeds performed on a wound into the Tetrastigma plant, the resulted bud opened on a fine day in June 2010, and attested to the triumph of conservation and cultivation of this rare parasitic plant.