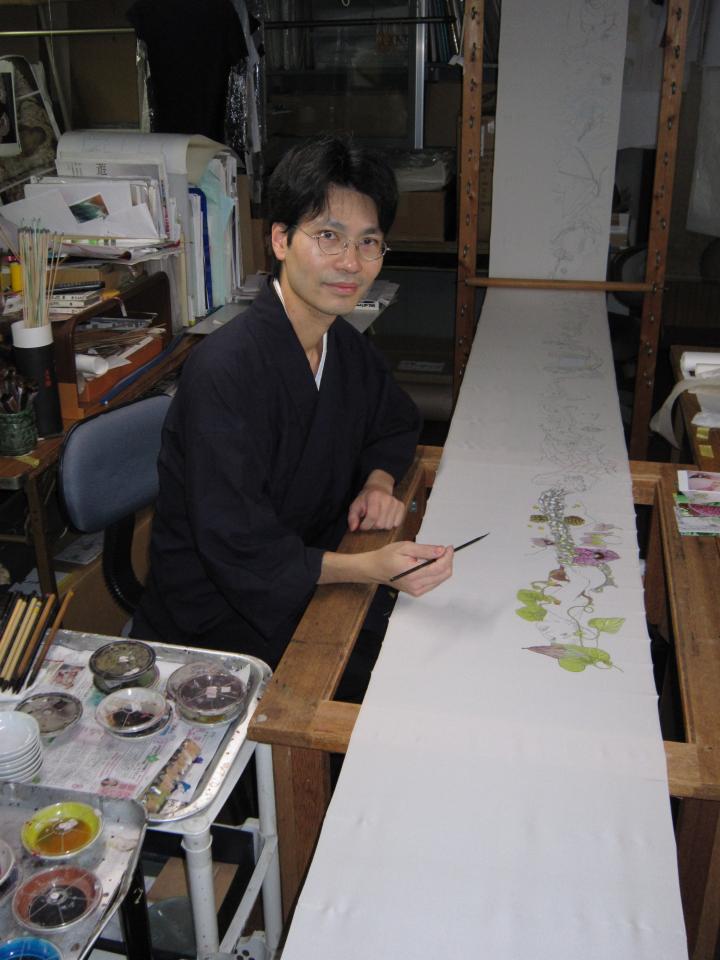 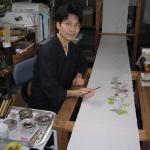 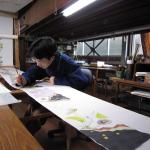 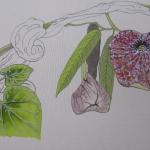 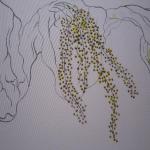 I have always been attracted by the bold design of Japanese kimono.  Having spent several years studying Japanese art history and its painting tradition, I used my spare time in the Summer of 2009 to draw a rough design of a costume partly inspired by Asakusa’s matsuri (festival) and the formal Asuka period court coat.

The costume is made up of a short Haori (jacket) type garment, much shorter than a real kimono and closer in form to an undergarment called Hanjuban.  A more casual obi (belt) helps to tie up the loose garment.  The garment was made from a dark brown silk with gold cloud motifs, originally bought in Vietnam.  It was cut and finished in China by an opera costume maker according to my design.

For the belt design, I made a precise line drawing on a 3 metre long tracing paper that rolls up for travel.  It features the vine called Phytocrene macrophylla from Java, some beautiful Japanese aristolochias throughout the entire length and two male figures, one on either end.  Then I started to look for a traditional yuzen factory that can provide a place to realize an obi.  From some of the guidebooks about Kyoto where yuzen traditional dye originated, I came across the organization called Taikenkobo www.taikenkobo.jp which provide a platform for interested parties to book appointments and experience various crafts of Kyoto.  From the choice of more than a dozen established studios and factories, my Tokyo friends helped me to make connection with Mr. Mansuke Ishida, a traditional yuzen artist and a member of Japanese Yuzen Artist Association.  Other studios only can accommodate interested parties for a simple yuzen experience that lasts for a couple hours at most.  Ishida Mansen Koujo www.eonet.ne.jp/~mannsuke/ is located near Nijo Castle served by several subway and train stations.  I went there by taxi on the first day to avoid getting lost.

As I researched this all in advance, I got special deals on hotels and plane tickets thanks to my Tokyo friends Yasushi San and Hiromi San who just about arranged everything.

Kyoto’s winter is cold with about 5 degrees outdoor and not much higher indoor in old traditional houses.  I put on layers of clothes but was able to warm up better by the nice heater inside the studio.  I met Ishida Sensei (teacher) and his daughter and we drove to visit Hayashi Sensei, Ishida Sensei’s friend, who is the chief artist of Hayashi Designer’s Studio.  Mr. Hayashi speaks perfect English having exhibited in New York and Vancouver, where I came from, helped translated between me and Mr. Ishida.

I explained my project and we discussed about the execution method and material involved over tea.  The more than eleven steps in Yuzen Dyeing will definitely take me at least several days to complete given the details I want in the final obi.  Mr. Hayashi showed me his collection of kimono art and generously invited me to visit his house to view the collection of prints, paintings and art collected over the years.

We left Mr. Hayashi’s studio and broke for lunch and then started preparing a piece of silk of 3 metre long, first fastened to two pieces of wood suspended using ropes to wooden beams.  Along the width, bamboo sticks helped stretch the silk. Soybean and seaweed juice mixture was then applied and left to dry.  This step of colour conditioning was important to prevent the running of colours in the subsequent steps.

Rough drawing (shitae) could be applied using a fine brush with Indian ink (lines will show in the end) or using a brush dipped in blue flower sap (to be washed off totally).  It took me an entire day to trace the delicate design onto the silk using a light table.  Areas using yuzen technique need starch contouring (norioki).  A white rubber starch, applied using a small pastry bag with a fine tube, is superimposed to prevent running of the colours outside the design.  Eventually when the rubber resist is washed off, the contour lines will be left white, giving the cloth the characteristic yuzen look.

On the second day, the silk then was taken to the 2nd floor to go through another colour conditioning and evaporating oil was sprayed on and then the silk was left to dry in a well ventilating room.  While the silk was drying, Ishida Sensei explained about colour choosing, mixing and applying.  A couple old colour books were brought out showing the colour samples with numbers and names.  Traditional yuzen follows a kind of “colour by number” scheme.  As a result, most often, all colours were coordinated and mixed in quantity to last before application.  My project calls for a more free-style painting.  Ishida Sensei demonstrated mixing different greens and by adding mixture of glue and water to come up with lighter greens that will not bleed on the silk.

Application of colour dye went smoothly but it took up the entire 3rd day and I added extra days.  After 25 more hours of colouring, the project came to a close.  The two male figures were left just in outline but the aristolochias were painted in deep burgundy and vivid pink, wave patterns were in light purple which contrasts well with bright green leaves.  Design of Japanese candies were in jolly colours while the Phytocrene vine was in gray and blue with shades of green punctuated by light yellow flowers and brown fruits.

For post-production, the silk will be steamed to set the colours, and then washed thoroughly, rinsed in cold running water so that surplus dye is washed out.  Then the final plain water washing will remove any dust or unwanted substance and then the silk is ready for ironing.

I enjoyed my time spent at Ishida Studio very much.  Ishida Sensei is very kind and showed me some of his beautiful creations be it kimono, Matsuri flags or traditional Heian silk decorations that acts as dividers of spaces in a room.  I also love his sketches of wild flowers.  The most spectacular is a haori design based on a study of Amida Raigo (the Descent of Amida Buddha).  I must also thank Ishida Sensei’s friend Hayashi Sensei, Ishida Sensei’s mother and brother, his daughter Ikuko San and the staff Kaori San for their kindness and immense support.  The lunch time with delicious bento box and the tea time snacks were the highlights of the day of work.  They enjoyed sharing their very special art and invite interested parties to learn the secret of yuzen dyeing in the classical city of Kyoto.