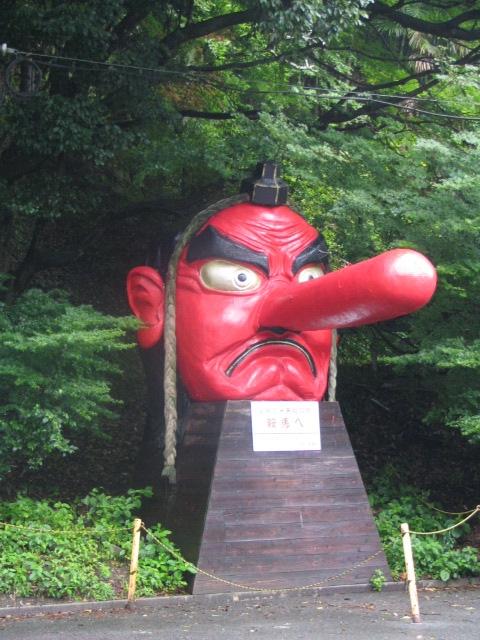 The huge monument of Tengu outside Kurama Station 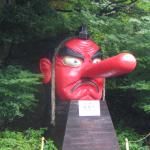 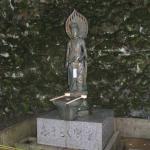 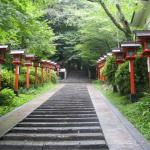 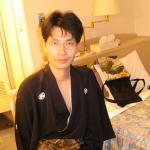 This was the fifth time I came to Kyoto, Japan.  I was determined to do something extraordinary.  I pulled out my black kimono to match my earth-toned obi (belt).  I tied up the best I could, put on my Japanese-style socks and sandals, armed with a fan and a small pouch to keep my money, off I left my hotel room in this full Japanese attire for a day out in the mountain, north of Kyoto.

A 30 minutes bus ride or a couple changes of subway lines brought me to Demachiyanagi Station.  Take the Eizan railway, Kurama line to go up the mountain.  A day pass only costs 1000 yen.  Another 30 minutes of fresh air and beautiful mountain landscape, I came to the terminal Kurama Station.  Along the path to the first gate of Kurama dera, there are eateries with handmade mountain-potato noodles.  You can sample the delicacies such as seaweed, pickles and green tea.  The path to the right will eventually take you to Kurama Onsen (Hot Spring).  But the one on the left are with stairs leading to the mountain path entering the sacred territories of Kurama dera.

This is the territories of Tengu.  Originally, Tengu were depicted as bird-like beings, but over time they took on more human forms but retained wings and crow-like heads (Karasu Tengu) or with red faces and long noses (Yamabushi Tengu).  Tengu are guardians of the mountains, highly skilled in the martial arts, possess supernatural powers including shape-shifting, the ability to move instantly from place to place, speak without moving their mouths, and the power to appear uninvited in people’s dreams.  Tengu often sided with less fortunate people but also play tricks on those who are arrogant.  Humble and cleanse yourself at the spring with a Buddhist statue before taking the stairs up.  Along the way, temple lanterns would be lighted at sundown.  After about 5 minutes, on the right, a large stone relief depicts the 6 child-liked Jizo Bosatsu.  Further, at this darkest corner, I found the stone of Mao-son no kami.  The Great King of the Conquerors of Evil and the Spirit of the Earth descended as a meteorite from Venus some 6 million years ago and landed at Kurama Yama.  While Mao-son gives divine protection to the one who worships him, he destroys those who oppose him hence the fearful name.  This completely shaded place with its small temple, stone Torii (arch) and small waterfall with permanently wet mosses made me shiver.

Thankfully, Yuki Shrine was ahead.  www.yukijinjya.jp  Constructed against the steep slope, the shrine extended its platform out into the air, offering a view rival that of Kiyomizu dera in Kyoto city.  Stairs go through the middle of the shrine lead to the two huge trees tied with ceremonial paper flags and ropes.  From here, I started my hike taking up the winding path with 99 bends shaded by forest trees.

According to legend, as a boy the famous warrior Minamoto no Yoshitsune (1159-89) trained in magical swordsmanship with the tengu king Soujoubou here.  After some 155 steps, passed the Golden Hall where a panorama of Kyoto would be enjoyed, the Treasure Hall Museum was ahead.  On the first floor, the exhibits concentrate on the flora and fauna of Mount Kurama.  Second floor shows the temple treasures and while national treasures are housed on the third floor.  In a quiet room, the statue of the temple’s main deity Bishamon-ten stands alongside Thousand-Armed Kannon and Mao-son.

From here, the narrow path shaded totally by tall trees creating darkness even in broad daylight.  It would take a solid hour to walk to Kibune Shrine, but not to be attempted by single female alone.  For this is the territories of Tengu and when the sun is about to set, the forest will be penetrated by screams of unidentified creatures.  At these fearful hours, the place is better deserted and admits no visitors.

Slowly, I traversed the old tree-rooted path in this traditional Japanese attire which made walking on the undulating ground extremely difficult.  Strength and persistence were needed to attempt this route.  Along the way, springs and natural stones are coloured with stories of the historical Yoshitsune or the legendary Mao-son or the mythical Tengu.

Finally I came to Okuoin Mao-den (the Palace of Mao-son).  It is a small little temple shaded under an old cedar tree in which the spirit of Mao-son is believed to reside.  From here, another 20 minutes of up and down along the tree-rooted path was a test on my determination and strength.  Often noises of wind or of birds could be heard adding to the mysterious atmosphere.  Were these noises of Tengu moving through the forest?  Or were they emanations of Mao-son’s universal power?

The last 10 minutes of the walk proved to be the toughest.  It was going downhill on stone steps and it was no fun walking in my tight kimono.  The downward slope was overgrown by wild kudzu and Akebia vines.  A huge hundred-year-old mountain wisteria was seen flowering early May.  I could finally hear the sound of water, and that was the sound of Kibune stream.  A snake quietly moved in the undergrowth.  I let it pass undisturbed for it sure contained the spirit of this sacred mountain.  Exit through the west gate, Kibune Shrine was ahead.  www.kibune.jp

A Lady dressed in pure white.  It is two o’clock passed midnight.  She came to Kibune Shrine near Mount Kurama, north of Kyoto.  Bare-footed, she traversed the wet mosses and forest tree’s roots.  Her feet were bleeding, leaving a bloody trail.  She had a nail in her mouth, a metal spike in her right hand, a wooden figure in her left.

The same Lady dressed now in red.  She was determined.  Red is painted on her pale visage under the moonlight.  She had a three prone metal ring on her head, lighted up with candles.  She chanted the name of her deserter.  She was seeking revenge.

Dressed in black, I walked up slowly the large stone stairway lined with distinctive red lanterns at the entrance to the shrine.  Originally, Kibune Shrine is dedicated to Takaokami-no-kami, a god of rain and water.  In the old times, the imperial emissary would bring a black horse to the shrine, symbolic of an overcast sky, to pray for rain, or in the case of too much rain, a white horse, symbolizing bridge sunlight, would be offered.  Commoners in the commerce related to water, such as the industries of weaving and dye, wine making, agriculture, and sailing etc. would come to worship.  There are wooden plates in the shape of a roofed house or a star for writing wishes on.  They are called “painted horses”.  I slowly walked to the spring against the side of the slope.  Here water gathered in a small pool and I paid 200 yen for a “water fortune” on a piece of white paper.  Immense the paper in the pool, wait 15 minutes for the divine fortune will slowly reveals on the wet paper.

The Shrine also gained a reputation as a place to pray for fortune in romance and marriage since the Heian period poet, Izumi Shikibu, was reputed to have prayed here to regain the love of her husband.  Romance Fortune can be asked a little further up at the second complex and remember to tie the green fortune paper on the sacred wood for the romance to become true.

However, in the famous Noh play Hashihime (bridge princess), a spurned woman, enraged by jealousy, goes to Kibune Shrine seven nights in a roll.  Wearing a mirror against her chest, a three prone metal ring on her head lighted up with candles, she walked bare-footed.  Her thick furrowed brows cast a shadow over intense metallic eyes that stare straight ahead.  The pale forehead gives way to dark reddish brown on the lower half of the face, symbolizing her extreme anger.  Black painted teeth are clearly visible in a grimacing mouth, and disordered strands of hair on the forehead and cheeks heighten the impression of intense emotional turmoil.  Here she pins the wooden figure onto the sacred tree and brings death to her enemy.

Other than love and revenge, Kibune is famous for the Kaiseiki, cuisine of Kyoto style.  I selected an affordable restaurant that had platforms elevated on Kibune Stream to enjoy my mini tofu kaiseiki amidst the breeze, slight drizzle, sound of the water running and the beautifully green maple leaves.

After lunch, I took a 30 minute walk down the road towards Kibune Station.  Along the way, the Kibune Stream was on my left, cherry blossoms and maple trees on my right.  If you come in June, at night there are clouds of fireflies.

Before heading to my next destination, I took a short break near Shijo Station.  At Shijo and Kiyamachi, Soiree Café (since 1948) was the perfect place to enjoy an alternative tea time.  The second floor was decorated with deep colour wood and antique mirrors.  The stained glass transformed the whole interior to a blue hue.  It was tranquil and mysterious like the bottom of the ocean.  I ordered the specialty here, sour yogurt with jellies.  For this brief moment, the world seemed to be standing still and I tried to gather strength and rested my tired legs on the bench.

From Kyoto Station, I took the train on JR Nara Line, to Inari Station.  On the way to Fushimi Inari Shrine, there were numerous old shops selling souvenirs and Inari crackers in the shape of a fox mask.  www.inari.jp  I arrived in the evening, all the shops already closed down and the shrine was lighted up with lanterns and the red Torii (gates) extended all the way up the mountain.  At Inari Shrine, the red torii are protected by a pair of fox statues, one on the left and one on the right.  Traditionally, the fox is able to ward off evil Kimon (demon gate, inauspicious direction where evil spirits enter).  Since the 8th century, the Shrine was visited mainly by commoners engaging in the agricultural business.  The thousands of red torii were made popular during the Edo period.  Worshippers donated to build new torii as a way to say thank you to wish granted by the god of Inari who not only protects the rice harvest, but also acts as the patron of prosperity for farmers and merchants.  Foxes are the messengers of Inari.  They have the power of transformation for either benevolent or malevolent purposes.  In many Japanese folk tales, the fox appears in the form of a bewitching woman or a charming man who seduces and tricks the unworthy or rewards and protects deserving people.  In human disguise, the fox can breed with human, cast illusions, appear in dreams, and read thoughts.

Walking through the red torii tunnel in the witching hours, beware of any stranger in beautiful clothes exuding a mysterious glow.  I walked slowly up admiring the all red torii, turned around and noticed the torii columns were written with donor’s names.  Passing through two of these tunnels, I thought it was the end of the walk but actually, it was just the beginning.  The four miles of walk under the torii tunnels extended all the way up the mountain took me two hours to complete.  It was absolutely safe to walk up the mountain as along the way, workers sometimes were still repairing older torii.  Just beware of strange flying illuminations called fox flare which can illuminate another path, hypnotize people and lead them into perilous situations.  That could be the work of the mischievous foxes.