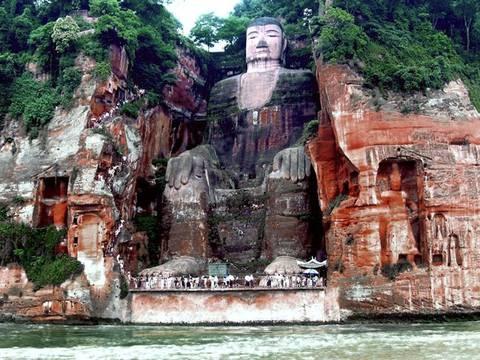 Leshan Giant Buddha is located at the insection of Min River, Qingyi River and Dadu River. It's carved on the cliff of Mt.Lingyunshan to the north of Min River. 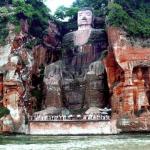 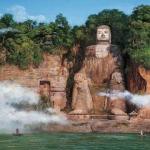 Leshan Giant Buddha is believed to be the world's largest and tallest sculpture of a Buddha carved in rock. It is one of the most magnificent tourist attractions in Sichuan Province and featured in poetry, song and story.

In 1996, it was added to the World Natural and Cultural Heritage List. It is at the confluence of three rivers, namely, Min River, Qingyi River, and Dadu River. It is carved into the cliffs of Mt. Lingyun.

About 125 km south of Chengdu, the 71m-high Giant Buddha sits in a cliff overlooking the confluence of the Dadu and Qingyi River. It is qualified as the largest stone-carved Buddha in the world. The statue is not Sakyamuni, the founder of Buddhism, but the Future Buddha called Maitreya according to Buddhist sutras.

The huge figure takes the shape of a Maitreya Buddha, a disciple of Sakyamuni, the founder of Buddhism. The
figure occupies the entire hillside. Its head reaches the top of the cliffs, his hands rest on his knees and his face has a serene expression as it gazes at Leshan city across the river which rushes past its feet.

Looking solemn and stately, the Buddha is 71 meters high. His shoulders are 28 meters wide, head 14.7 meters long and 10 meters broad, with a total of 1,021 chignons of hair clustered on it. Each chignon is as big as a round table. Its drooping ear is 6.2 meters long and each eye is 3.3 meters wide. Its middle finger is 8.3 meters long, and each of its bare feet is 11 meters long and 8.5 meters wide, large enough for more than 100 people to sit on.

According to a local saying, "The mountain is a Buddha and the Buddha is a mountain."

Known as Dafo, the statue depicts a seated Maitreya Buddha with his hands resting on his knees, gazing across the river with heavy-lidded eyes. Maitreya is the future Buddha, who will appear to preach the dharma when the teachings of Gautama Buddha have faded away. He was especially popular during the 4th to 7th centuries and his images can be found throughout the Buddhist world, conveying his characteristic air of expectancy and promise.

As a colossal statue the Buddha is so awe-inspiring that every pious Buddhist feels compelled to fall to his knees and to pray for blessings and safety in life. "

Several drainage passages hidden in the Buddha's hair, collar, chest, and holes in the back of his ears prevent the Buddha from serious erosion and weathering. He has been lovingly maintained on a regular basis throughout his 1,200-year history, but is still a bit mossy.

Visitors stare in awe at the Buddha from the tourist ferries and from a terrace next to his ear. On one side of the terrace is a modern statue of the monk Haitong, and behind is the Lingyun Temple Museum with exhibits on the construction and renovations of Dafo.

South of the Giant Buddha is Wuyou Si, which visitors pass on the way from the ferry to the Buddha. A pink-walled monastery founded in 742 AD, it has impressive decorations including splendid gate guardians, painted scenes from the Journey to the West (on the second hall) and amusing sculptures of arhats (inside the Louhan Hall).

On the other side of the gully on Lingyun Shan, there are signs for Han-dynasty tomb chambers, which suggest this site was sacred before the Buddha was carved.