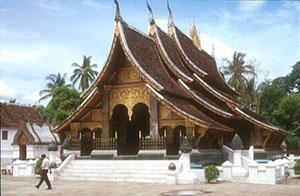 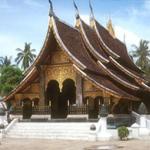 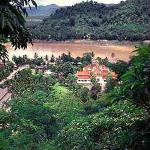 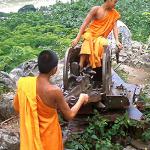 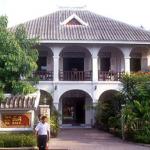 Lazy days beside the Mekong may not last much longer: the blacktop ribbon has snaked its way north over the mountains.

Isolated in the mountains of northern Laos, Luang Prabang, a former royal capital, must be the only Asian city in which one hardly need look before crossing the street.

Graying travelers still drift into town in search of those hazy lotus-eating days of the early 1970s when it was enough to 'sit and gaze out across the Mekong...' as veteran Randy Johnson put it.

"Does it still exist, or was it just a hazy dream I conjured in my imagination?" he asks. Randy, I think it's still here. With its 32 historic Buddhist temples this is the best-preserved city in South-East Asia, according to UNESCO. Every block or so, another brightly tiled, many-tiered roof sweeps low to the ground.

But the hazy days beside the Mekong may not last much longer. Route 13, the blacktop ribbon of progress, has inched over the mountains from Vientiane, the capital, even as another reaches down from the Chinese border.

For the 16,000 people of Luang Prabang life will become much easier but for the rest of us, something less tangible has gone forever.

Already the streets are dotted with Australian-made payphones which allow the falang the unreal sensation of punching a few buttons to call home.

Minutes from the airport, we encounter French Indochina preserved in aspic: wooden shutters, hand-lettered signs; low-slung public buildings like the provincial hospital or the internat primaire (elementary school). The city office of Lao Aviation is a two-roomed bungalow where reservations are inscribed in exercise books.

What scars remain from two decades of communism? Mercifully few. Apart from the occasional hammer and sickle above a doorway, there's the heroic Soviet-style billboard sponsored by Pharmaceutical Factory No. 2.

The natural setting remains timeless. Climb Phou Si, the steep limestone crag looming over town to admire the encircling sawtooth emerald ridges. Just to the north, the Nam Khan (Khan River) swings into the Mae Nam Khong, the mighty Mekong which had long been the high road out of town. Splashes of saffron, novice monks scamper about the hilltop pathways, using the anti-aircraft gun as a carousel - the dogs of war are stilled at long last.

Only on weekday mornings are visitors let loose within the Royal Palace Museum, an inspired blend of Lao vernacular architecture with the Beaux Arts idiom of 1930s France. More important for the Lao is the holy of holies, the sanctuary of the golden Buddha or Prabang brought from Cambodia in the fourteenth century, and from which the city derives its name.

Amongst the most magnificent of the city's monuments is Wat Xieng Thong, the Golden City Temple erected in 1560, and particularly its scarlet-and-gold royal funeral carriage house.

Many of Luang Prabang's temples are gathered within easy walking distance, amongst Chinese shophouses and colonial villas. Some of the latter have been refurbished to create distinctive accommodations.

Midway between the Royal Palace Museum and Wat Xieng Thong. Just uphill from the boulevard along the Mekong. On the Rue Sakkalin; make that Thanon Photisalat, no make it Sisavangvong.

Baw pen nyang, never mind. Don't expect precision in Laos: street numbers or even names aren't necessary to find the Villa Santi or Villa de la Princesse, the 120-year old mansion which was the home of Princess Khampha until the communist Pathet Lao marched into town in 1975.

The Villa Santi offers comfortable air-conditioned rooms with private facilities. (My discovery in a bedside drawer of a folded newspaper - in the Turkish language - lent a touch of mystery). The original villa was extensively remodelled by the princess and her husband in 1991 and decorated with traditional arts and antiques. In 1995 an annex built in sympathetic style was opened nearby.

After an afternoon?s sweaty homage to the glories of Buddhist religious art, settle into a carved timber chair on the balcony outside the Villa Santi's bar and restaurant, surrounded by antiques and sepia-tint photographs under a ceiling of woven cane. Gentle zephyrs filter through the latticed panels set into shuttered doors and windows; the staff, unprompted, will train the nearest fan on you - reward them with simply a heartfelt khawp jai, thank you. Sip a Return of the Dragon, a rich concoction of rice wine and perhaps Campari - at a dollar a throw.

Equally pleasant is to savour a bottle of Beer Lao on a terrace bar high above the Mekong as the sun drops behind the blue-black clouds.

Across town, Malee's Lao Food Restaurant serves fried chicken with slabs of ginger, spicy salad tossed with peanuts and steamed fish adorned with eggplant, morning glory or even 'Mekong weed' - that's not a narcotic, but a form of watercress.

Markets are the focal points of the city, as elsewhere in Asia. The sprawling morning market is stocked with housewares and trinklets, plus a selection of woven fabrics. Turbanned, black-trousered figures picking between the stalls are hilltribe Hmong people whose villages huddle just outside town.

Thailand's new carrier Angel Air flies from Bangkok to Luang Prabang. 'Respectable' visitors are issued visas on arrival at the airport for US$50, payable only in cash.

Best (and busiest) times to visit Luang Prabang are in April, when boat races on the Mekong commemorate Pimai, the Lao Lunar New Year and during the December - January cool season. Lao Aviation's frequent Vientiane - Luang Prabang flights cost US$60 one way, but safety standards are uncertain...

Thai Baht and US Dollars circulate freely alongside the Lao Kip, which is not convertible. Outside the major hotels credit cards are not widely accepted.